Cast Your Customers: Creating a Buyer Persona. Persuasion relies on knowing the party you aim to convince—in marketing, your customers. 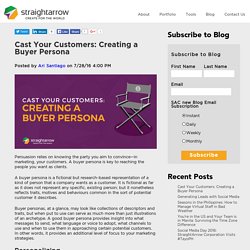 A buyer persona is key to reaching the people you want as clients. A buyer persona is a fictional but research-based representation of a kind of person that a company wants as a customer. It is fictional as far as it does not represent any specific, existing person; but it nonetheless reflects traits, motives and behaviours common in the sort of potential customer it describes.

Buyer personas, at a glance, may look like collections of descriptors and traits, but when put to use can serve as much more than just illustrations of an archetype. A good buyer persona provides insight into what messages to send, what language or voice to adopt, what channels to use and when to use them in approaching certain potential customers. Personalizing Crafting a buyer persona begins with identifying the type of person you want as a customer. Next, identify your potential sources of research. 1. Freelancer or design agency: Which should you choose? No one can ever refute how cheaper it is to get a freelance designer than tapping an agency to outsource your design work to. 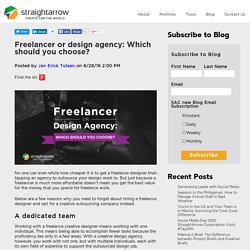 But just because a freelancer is much more affordable doesn’t mean you get the best value for the money that you spend for freelance work. Below are a few reasons why you need to forget about hiring a freelance designer and opt for a creative outsourcing company instead. A dedicated team Working with a freelance creative designer means working with one individual. Generating Leads with Social Media. Much has been said about the benefits of marketing through social media, but the majority of this focuses on its strengths at establishing a brand or building awareness. 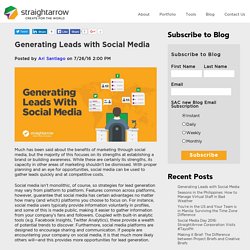 While these are certainly its strengths, its capacity in other areas of marketing shouldn’t be dismissed. With proper planning and an eye for opportunities, social media can be used to gather leads quickly and at competitive costs. Social media isn’t monolithic, of course, so strategies for lead generation may vary from platform to platform. Features common across platforms, however, guarantee that social media has certain advantages no matter how many (and which) platforms you choose to focus on. For instance, social media users typically provide information voluntarily in profiles, and some of this is made public, making it easier to gather information from your company’s fans and followers.

General Methods Given those advantages, certain methods are viable across all platforms. Facebook Twitter LinkedIn Download eBook. You're in the US and Your Team is in Manila: Surviving the Time Zone Difference. Among the challenges that often come with outsourcing is managing time zones. 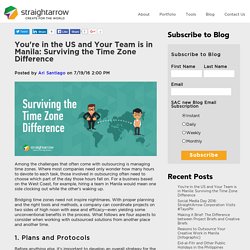 Where most companies need only wonder how many hours to devote to each task, those involved in outsourcing often need to choose which part of the day those hours fall on. For a business based on the West Coast, for example, hiring a team in Manila would mean one side clocking out while the other’s waking up. Social Media Day 2016: StraightArrow Corporation Visits #TayoPH. Filipinos have developed a reputation of ardent internet and social media consumption, and with good reason. 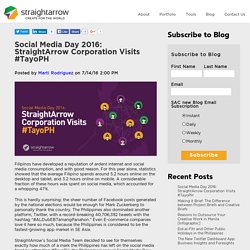 For this year alone, statistics showed that the average Filipino spends around 5.2 hours online on the desktop and tablet, and 3.2 hours online on mobile. A considerable fraction of these hours was spent on social media, which accounted for a whopping 47%. This is hardly surprising; the sheer number of Facebook posts generated by the national elections would be enough for Mark Zuckerberg to personally thank the country. The Philippines also dominated another platform, Twitter, with a record-breaking 40,706,392 tweets with the hashtag “#ALDubEBTamangPanahon.” Even E-commerce companies love it here so much, because the Philippines is considered to be the fastest-growing app market in SE Asia. Eid-al-Fitr and Other Public Holidays in the Philippines. The Office of the President announced earlier today that the Philippines will mark Eid-al-Fitr with a public holiday on Wednesday, 6 July 2016. 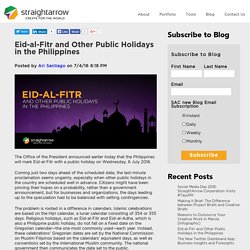 Coming just two days ahead of the scheduled date, the last-minute proclamation seems ungainly, especially when other public holidays in the country are scheduled well in advance. Citizens might have been pinning their hopes on a probability, rather than a government announcement, but for businesses and organizations, the days leading up to the speculation had to be balanced with setting contingencies. Inbound Marketing HUGs Manila. Handing out flyers to random consumers in a race to meet a quota of prospects: It’s a practice that international and Filipino marketers in Metro Manila are all too familiar with - and that some have said goodbye to - at Strictly Inbound: How to Leverage Inbound Marketing in the Philippines. 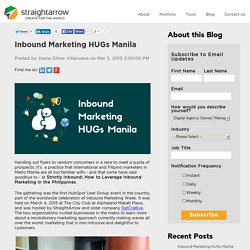 The gathering was the first HubSpot User Group event in the country, part of the worldwide celebration of Inbound Marketing Week. It was held on March 4, 2015 at The City Club at Alphaland Makati Place, and was hosted by StraightArrow and sister company GetCre8ive. The two organizations invited businesses in the metro to learn more about a revolutionary marketing approach currently making waves all over the world: marketing that is non-intrusive and delightful to customers. The event began with a round of Human Bingo, where attendees got to know each other and practice marketing P2P – People to People.