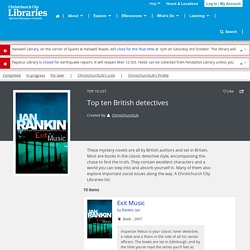 Most are books in the classic detective style, encompassing the chase to find the truth. They contain excellent characters and a world you can step into and absorb yourself in. Many of them also explore important social issues along the way. A Christchurch City Libraries list. 10 items Exit Music Book - 2007 Inspector Rebus is your classic loner detective, a rebel and a thorn in the side of all his senior officers. Call the Dying Book - 2004 Andrew Taylor writes a variety of crime fiction. A Taste for Death Spoken-word CD - 2008 What can one say about the doyen of British crime writers except that she's the best. The Vault Book - 2011 Ruth Rendell writes in more than one style. No Lovelier Death Book - 2009 Portsmouth writer Graham Hurley spends quite a lot of time with the local police force, and it shows in his books. Bad Boy Book - 2010 This Body of Death The Devil's Edge The Death of Dalziel. If you want...historical British crime. Mysteries written by British authors and set in the past. 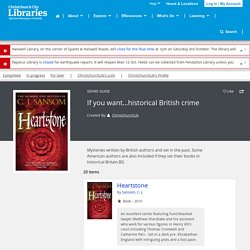 Some American authors are also included if they set their books in historical Britain.BG. If you like ... gritty British crime. This list is for lovers of noir detective novels - the stories are set in a world of corruption and violence. 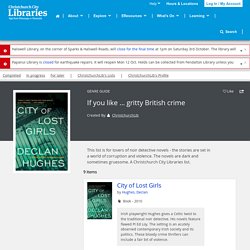 The novels are dark and sometimes gruesome. A Christchurch City Libraries list. 9 items City of Lost Girls. If you like ... cosy British crime. Cosy mysteries usually involve an amateur sleuth, often a woman. 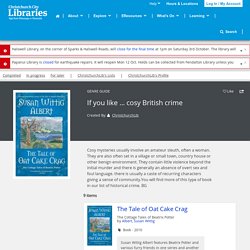 They are also often set in a village or small town, country house or other benign environment. They contain little violence beyond the initial murder and there is generally an absence of overt sex and foul language. there is usually a caste of recurring characters giving a sense of community.You will find more of this type of book in our list of historical crime. BG 9 items The Tale of Oat Cake Crag The Cottage Tales of Beatrix Potter Book - 2010 Susan Wittig Albert features Beatrix Potter and various furry friends in one series and another consists of Victorian mystery novels written with her husband and published under the joint pseudonym Robin Paige. Dragon Head. If you like ... classic British crime. A selection of books and authors from the golden age of British crime in the 1920s and 1930s. 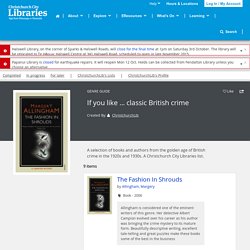 A Christchurch City Libraries list. 9 items The Fashion In Shrouds. If you like ... British police at work. If you have already seen our Top 10 British detectives, then try these police procedurals in the classic crime mode. 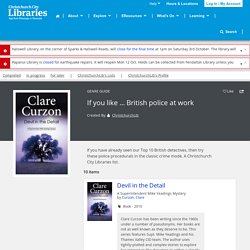 Christchurch City Libraries. For crusading lawyers, corruption and courtroom drama, try a twisted suspenseful tale by one of these authors. 24 items The Fifth Witness Book - 2011. 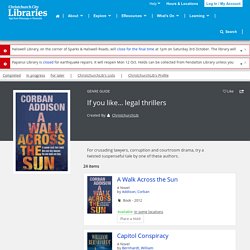 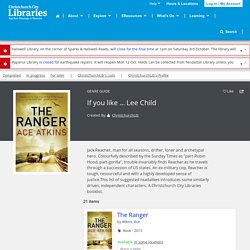 Colourfully described by the Sunday Times as “part-Robin Hood, part-gorilla”, trouble invariably finds Reacher as he travels through a succession of US states. An ex-military cop, Reacher is tough, resourceful and with a highly developed sense of justice.This list of suggested readalikes introduces some similarly driven, independent characters. Christchurch City Libraries.

Contemporary stories about case-hardened detectives, in the style pioneered by Dalshiell Hammett and Raymond Chandler 16 items The Glass Rainbow Book - 2010 James Lee Burke's novels are set in the bayou near New Orleans and in New Orleans itself- a ready made noir setting, which he makes the best of with evocative descriptions. 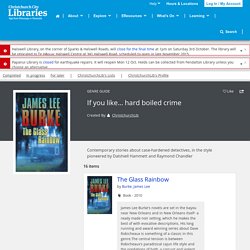 His long running and award winning series about Dave Robicheaux is something of a classic in this genre.The central tension is between Robicheaux's paradisical cajun life style and the predations of both, a corrupt and violent society, and the haunting nature of his past. If you like ... Scandinavian crime. Bleak landscapes, bizarre, often gory murders and morose, dysfunctional detectives are dominant themes in Scandinavian crime fiction. 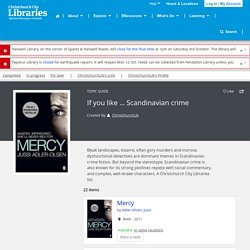 But beyond the stereotype, Scandinavian crime is also known for its strong plotlines replete with social commentary, and complex, well-drawn characters. If you like ... New Zealand crime novels. These writers use New Zealand characters and settings in their thrillers and crime fiction. A Christchurch City Libraries booklist. 17 items A Present for the Czar Book - 2003. If you like ... Italian crime writers. Mystery novels set in Italy - whether by Italian, British or American authors. A Christchurch City Libraries list. BG 14 items Drawing Conclusions Book - 2011 Atmospheric novels featuring the wonderful Commissario Guido Brunetti and his family.

Cozy Mysteries, Thrillers and Paranormal Romance. Mystery Books, Historical Romance and Nora Roberts. Crime Down Under. Gmail. The Online Magazine of the International Thriller Writers. Crime Down Under. 100 Best Curator and Museum Blogs. Although not everyone has the resources to visit and study museums up close and personal, the Internet makes it possible for you to get a look into them from afar. By following blogs from museums and curators, you can get a unique perspective on museums around the world. Check out these 100 blogs to study and see the latest from museums. (original post) Resources & Advice In these blogs, you’ll see useful resources and advice for museums. Curators & Staff Check out these blogs to learn about museums from their curators and other staff. Art In these blogs, you can learn about art museums.

Children & Education See fun activities and more in these blogs about children’s and education museums. The Learning Team, The Manchester Museum: Find learning resources and more through the Manchester Museum blog.What’s Happening at The Children’s Museum of Memphis? History & Culture These blogs share the happenings of history and culture museums. Science Miscellaneous. Nordic Bookblog - Scandinavian Fiction and Crime Fiction. The 30 Greatest Literary Detectives Of All Time. Euro Crime, for British and European crime fiction. The Thrilling Detective Web Site.