You're not going to believe what I'm about to tell you. Comics Blog Books Shop Comics: Random Most Popular All Cats Grammar Food Animals Tech.

Neuroscientists Discover A Song That Reduces Anxiety By 65% (Listen) Anxiety – the feeling of panic, worry, fear and dread. 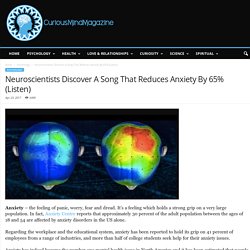 It’s a feeling which holds a strong grip on a very large population. In fact, Anxiety Centre reports that approximately 30 percent of the adult population between the ages of 18 and 54 are affected by anxiety disorders in the US alone. Regarding the workplace and the educational system, anxiety has been reported to hold its grip on 41 percent of employees from a range of industries, and more than half of college students seek help for their anxiety issues. Anxiety has indeed become the number one mental health issue in North America and it has been estimated that people with an anxiety disorder are 3-5 times more likely to visit the doctor and 6 times more likely to be hospitalized for psychiatric disorders than non-sufferers.

How did anxiety become so prevalent in our society? 4 Powers That May Be Hiding Behind Anxiety Disorders. Anxiety has been widely regarded as a very negative condition that tends to ruin people’s everyday simple pleasures and renders them incapable of facing new challenges. 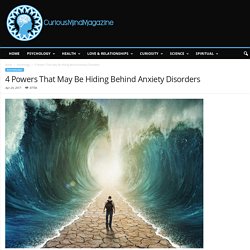 In short, anxiety is commonly associated with being a purely negative thing. But what if this ‘curse’ comes with certain gifts that others don’t possess? Scientists have been exploring the effects of anxiety for decades and they have found that besides the commonly shunned-upon negative effects, anxiety indeed does come with a set of powers too. 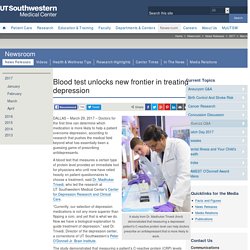 Madhukar Trivedi (front) demonstrated that measuring a depressed patient’s C-reactive protein level can help doctors prescribe an antidepressant that is more likely to work. DALLAS – March 29, 2017 – Doctors for the first time can determine which medication is more likely to help a patient overcome depression, according to research that pushes the medical field beyond what has essentially been a guessing game of prescribing antidepressants. What Stress Does to Your Brain. Prolonged stress changes the brain. 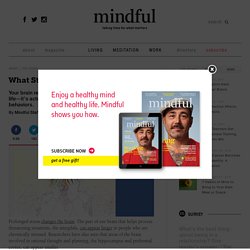 The part of our brain that helps process threatening situations, the amygdala, can appear larger in people who are chronically stressed. Researchers have also seen that areas of the brain involved in rational thought and planning, the hippocampus and prefrontal cortex, can appear smaller. So what do the brains of meditators look like? The exact opposite: more capacity for decision-making, less trigger-happy when faced with a perceived threat. 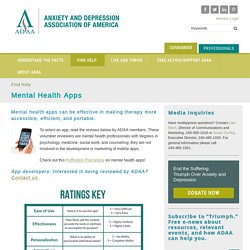 It’s also useful for managing worry, performance anxiety, test anxiety, and perfectionism. The skills taught may be applied to individuals with physical, emotional, cognitive, or behavioral manifestations of anxiety, providing users with more helpful, balanced ways of thinking about feared situations. It does a terrific job of readily offering lists of active coping strategies tailored to the type of anxiety and a variety of methods to manage anxiety; the information and strategies are simple and clear. "Chill out" tools such as breathing exercises, mental imagery, and mindfulness strategies are provided in text and audio format. "Quick Tips" are included to assist with anxiety in the moment. Harvard Has a Free Online Course on Buddhism That You Can Take Right Now. If you wanted to learn more about Buddhism, but needed an easy and authoritative resource, you are in luck. 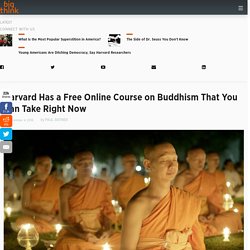 Harvard University made a great course on the religion available online for free. While the “Buddhism Through Its Scriptures” course is no longer interactive and has been archived, all of its rich lecture and supplemental materials are available upon registration. The course is taught by Professor Charles Hallisey from Harvard’s Divinity School, who is also the Yehan Numata Senior Lecturer on Buddhist Literatures. 9 Nervy Facts About the Vagus Nerve. Journaling Can Help You Out of a Bad Mood. James Pennebaker, a distinguished professor at the University of Texas, got married right out of college in the early ‘70s. 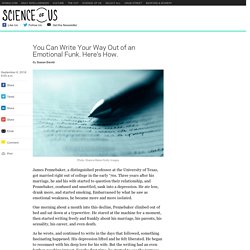 Guided Meditation For Anxiety & Stress, Beginning Meditation, Guided Imagery Visualization. Everything Doesn't Happen For A Reason — Tim Lawrence. Log In. Photo It has been described as one of the most contentious, tawdry and angry presidential elections in history. 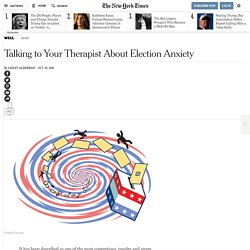 And it’s taking a toll on our mental health. “I’ve been in private practice for 30 years, and I have never seen patients have such strong reactions to an election,” said Sue Elias, a licensed clinical social worker in Manhattan. The American Psychological Association says that 52 percent of American adults are coping with high levels of stress brought on by the election, according to national Harris Poll survey data released last week. Therapists around the country said in interviews that patients are coming to appointments citing their fears, anger and anxiety about the election. Why Art Therapy Works. Healing with paint: How the pioneer of art therapy helped millions of mental health patients.

It is the late 1990s and once again Gary Molloy’s severe bipolar disorder has hospitalised him. 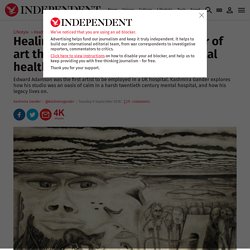 Unbeknown to Molloy, though, this stint will be the one to transform his life. “I saw these wonderful paintings on the ward. They were quite abstract. I was mystified and inspired, ” recalls Molloy, now 47, of his stay in a hospital in east London where he was born and raised. Gripped, he needed to find out more, and discovered the works were created at Core Arts, a nearby centre for people with mental health illnesses. How Extroverted Introverts Interact Differently With The World - 702K Shares — annabashedly. You need constant mental stimulation. You hate first dates. “Please anything but small talk” you think to yourself. Unlike a real extrovert, small talk stresses you out like crazy - you need deeper conversations to make you feel alive.

When Trauma Follows You into Your Nightmares. They are frightening, disturbing, inconvenient, and happen when you are supposed to be rejuvenating your body and brain: the nightmares that follow a traumatic experience. Nightmares are quite common among people who have experienced a traumatic event. The aftereffects of a nightmare often follow them into the next day, which can affect their emotional well-being and ability to function.

Nightmares can be quite scary and negatively impact the amount of restful sleep a person is getting. They can feel like one is re-experiencing the traumatic event, and the thought of going to sleep can become anxiety-provoking. The less sleep a person gets, the more difficult it is for the brain to process a traumatic event and file it away correctly. The Function of Dreams According to Hartmann (1996), one theory regarding the function of dreaming is that it allows the brain to make connections more efficiently and effectively than the conscious mind.

The Brain in Defense Mode: How Dissociation Helps Us Survive. According to Ross and Halpern (2011), there are several definitions of dissociation. One of them (referred to as “the general systems meaning of dissociation”) is “the opposite of association” or the disconnection of two or more things that were once associated with each other. Another definition, presented by Steinberg and Schnall (2001), defines dissociation as “an adaptive defense in response to high stress or trauma characterized by memory loss and a sense of disconnection from oneself or one’s surroundings.” Dissociation occurs when someone disconnects from some part of himself or herself or the environment. It can occur in a number of different ways, including disconnection from one’s emotions, body sensations, memories, senses, etc.

A normal and common phenomenon, dissociation can happen in mild forms even when there is not imminent danger or stress. It Didn’t Start With You: How Inherited Family Trauma Shapes Who We Are. By Mark Wolynn Guest writer for Wake Up World A well-documented feature of trauma, one familiar to many, is our inability to articulate what happens to us. We not only lose our words, but something happens with our memory as well. During a traumatic incident, our thought processes become scattered and disorganized in such a way that we no longer recognize the memories as belonging to the original event. Instead, fragments of memory, dispersed as images, body sensations, and words, are stored in our unconscious and can become activated later by anything even remotely reminiscent of the original experience. Schizophrenia, Autism Risk Gene Trajectories Point to Shared Causes. Risk genes for schizophrenia and autism conspicuously activate in the same neuronal neighborhood of the brain’s cortex, or outer mantel, during infancy.

This suggests some related underlying illness processes – even though known genetic variations associated with the disorders overlap by only 5 percent, say researchers. Their study, which pinpointed the developmental trajectories of the suspect genes in the monkey brain, also identified divergent timing of risk gene activation that might help to explain the differing courses of the illnesses. Autism-related genes first switched on in newborn neurons during prenatal development, while schizophrenia risk genes didn’t activate until infancy.

This suggests that genetic risk for autism may have more to do with prenatal processes, such as the birth of new neurons, while schizophrenia risk genes may impact processes underway during infancy, such as refinement of neuronal circuitry. Can Traumatic Memories Be Changed? 28 simple changes to help you become a different person. I Went to a Bibliotherapist and This Is What Happened. Does the Role Scripted for You in Childhood Need Rewriting? A Bed Time Meditation to Help Overcome Insomnia. 20 Cognitive Distortions and How They Affect Your Life. Choose the Mandala that Calls To You & Discover the Meaning. Person Asks Online For Advice On How To Deal With Grief. This Reply Is Incredible. Your Mind & Body Are Not Separate. This Is Your Brain on Meditation. This Is Your Brain on Meditation. High Functioning Depression: We Can’t Overlook the Overachievers.

Science Says Lasting Relationships Come Down To 2 Basic Traits. Buddhists & Leading Neuroscientists Agree: “Consciousness Is Everywhere” Therapeutic Alliance: What’s Love Got To Do With Therapy? How 15 Positive Affirmations Can Change Your Life. A Bed Time Meditation to Help Overcome Insomnia. How To Increase Your Resilience Factor. When Trauma Follows You into Your Nightmares.