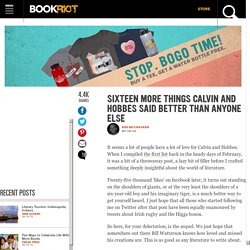 When I compiled the first list back in the heady days of February, it was a bit of a throwaway post, a lazy bit of filler before I crafted something deeply insightful about the world of literature. Twenty-five thousand ‘likes’ on facebook later, it turns out standing on the shoulders of giants, or at the very least the shoulders of a six-year-old boy and his imaginary tiger, is a much better way to get yourself heard.

I just hope that all those who started following me on Twitter after that post have been equally enamoured by tweets about Irish rugby and the Higgs boson. So here, for your delectation, is the sequel. We just hope that somewhere out there Bill Watterson knows how loved and missed his creations are. Once more, enjoy. On the secret of immortality: combine predestination with procrastination Calvin: God put me on this earth to accomplish a certain number of things. Sixteen Things Calvin and Hobbes Said Better Than Anyone Else. 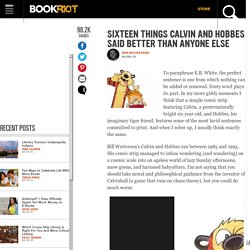 White, the perfect sentence is one from which nothing can be added or removed. Every word plays its part. In my more giddy moments I think that a simple comic strip featuring Calvin, a preternaturally bright six year-old, and Hobbes, his imaginary tiger friend, features some of the most lucid sentences committed to print. And when I sober up, I usually think exactly the same.

Bill Watterson’s Calvin and Hobbes ran between 1985 and 1995. So here, in no particular order, is a selection of quotes that nail everything from the meaning of life to special underwear. (NOTE: Check out Part II: Sixteen MORE Things Calvin and Hobbes Said Better Than Anyone Else) On life’s constant little limitations Calvin: You know, Hobbes, some days even my lucky rocket ship underpants don’t help. A Reading List to Inspire your Inner Wild Woman. “The strongest actions for a woman are to love herself, be herself and shine amongst those who never believed she could.” ~ Author Unknown So you want to unleash your inner wild woman? 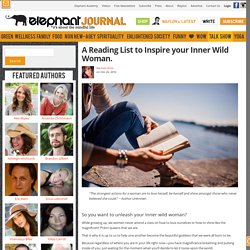 While growing up, we women never attend a class on how to love ourselves or how to shine like the magnificent f*ckin’ queens that we are. That is why it is up to us to help one another become the beautiful goddess that we were all born to be. Because regardless of where you are in your life right now—you have magnificence breathing and pulsing inside of you, just waiting for the moment when you’ll decide to let it loose upon the world. It’s not easy to awaken— it’s not a one step process. If anything, it’s more like the cha-cha—a few step forward and then a few steps back—but progress none the less. I have received numerous inquiries, asking about my personal reading list from women all over this beautiful planet who are searching for more. Together we can change the world. Listed in no particular order: 20 Amazing Home Libraries for the Modern Book Worm - Terrys Fabrics's BlogTerrys Fabrics's Blog.

We may have Kindle and other electronic reading devices, but for many the concept of a real book, with its paper pages can’t be beaten. 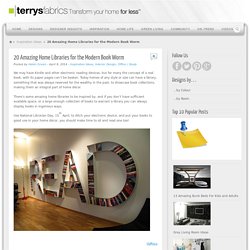 Today homes of any style or size can have a library, something that was always reserved for the wealthy in the past, to showcase book collections, making them an integral part of home décor. There’s some amazing home libraries to be inspired by, and if you don’t have sufficient available space, or a large enough collection of books to warrant a library you can always display books in ingenious ways. Use National Librarian Day, 15th April, to ditch your electronic device, and put your books to good use in your home décor, you should make time to sit and read one too! I Had No Idea That These Two Famous Authors Were Veterans! VET_Blog_DTOP_BelowTitle_300x250 posted By Dan Doyle Dan Doyle You know their names. 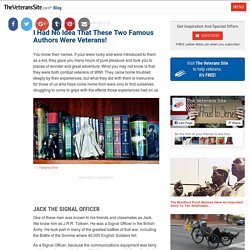 If your were lucky and were introduced to them as a kid, they gave you many hours of pure pleasure and took you to places of wonder and great adventure. What you may not know is that they were both combat veterans of WWI. VET_Blog_RESP_SC_Horizontal1 Jack The Signal Officer One of these men was known to his friends and classmates as Jack. As a Signal Officer, because the communications equipment was fairly primitive and was easily “tapped” by the enemy, most information had to be passed between positions by runners. As the officer in charge, he also had to write the condolence letters notifying the families of their son’s deaths.

He said of these experiences, “One has indeed personally to come under the shadow of war to feel fully its oppression. Clive The Foot Soldier The other soldier was known to his friends as Clive. In April of 1915 his position was hit hard by an artillery barrage from the Germans.

Related:  How to use Pearltrees   -  Pearltrees Reviews   -  The Stranger   -  Philosophy   -  Sixteen Things Calvin and Hobbes Said Better Than Anyone Else   -  Education   -  Enterprise