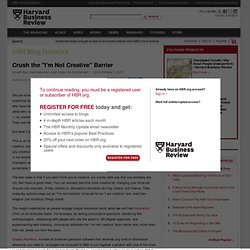 Christensen | 10:50 AM May 7, 2012 Did you know that if you think you are creative, you’re more likely to actually be creative? This surprising fact pops up again and again in our research. In our database of over 6,000 professionals who have taken the Innovator’s DNA self & 360 assessments, people (entrepreneurs and managers alike) who “agree” with the survey statement “I am creative” consistently deliver disruptive solutions — by creating new businesses, products, services, and processes that no one has done before.

They see themselves as creative and act that way. But what if you don’t see yourself as creative? This is an important question to ask because many — probably half — of you don’t think that you’re creative. The bad news is that if you don’t think you’re creative, our survey data say that you probably are not. The result? Associational thinking: I creatively solve challenging problems by drawing on diverse ideas or knowledge. PBS Digital Studios. Waarom het kunstdebat in Nederland zo moeizaam is. Jonah Lehrer Wasn’t the Only Journalist Shaping His Conclusions. Finally and fatally, what ties the narrative together is not some real insight into the nature of Dylan’s art, but a self-help lesson: Take a break to recharge. 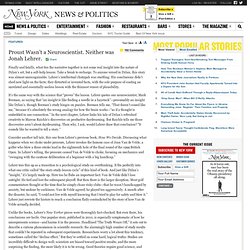 To anyone versed in Dylan, this story was almost unrecognizable. Stefon Harris: There are no mistakes on the bandstand. Scott Belsky on How to Avoid Idea Plateaus. Jonah Lehrer Resigns From New Yorker Amid Scandal. It’s been a rough couple of months for the science Wunderkind. 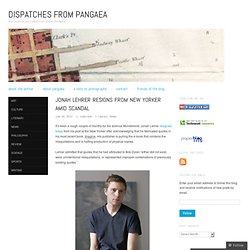 Jonah Lehrer resigned today from his post at the New Yorker after acknowledging that he fabricated quotes in his most recent book, Imagine. His publisher is pulling the e-book that contains the misquotations and is halting production of physical copies. Jonah Lehrer on How Creativity Works. By Maria Popova Inside the ‘seething cauldron of ideas,’ or what Bob Dylan has to do with the value of the synthesizer mind. 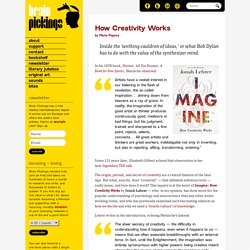 In his 1878 book, Human, All Too Human: A Book for Free Spirits, Nietzsche observed: Artists have a vested interest in our believing in the flash of revelation, the so-called inspiration… shining down from heavens as a ray of grace. In reality, the imagination of the good artist or thinker produces continuously good, mediocre or bad things, but his judgment, trained and sharpened to a fine point, rejects, selects, connects… All great artists and thinkers are great workers, indefatigable not only in inventing, but also in rejecting, sifting, transforming, ordering.”

Some 131 years later, Elizabeth Gilbert echoed that observation in her now-legendary TED talk. The origin, pursuit, and secret of creativity are a central fixation of the Idea Age. Jonah Lehrer on How to Be Creative. Jonah Lehrer: The man with the big ideas. A rising star of popular science, who has opened up the laboratory to the everyday reader, takes on the question of creativity ©Dylan Coulter When two men meet each other for the first time, there is nothing quite so easy as talking about sports to establish a comfortable rapport. 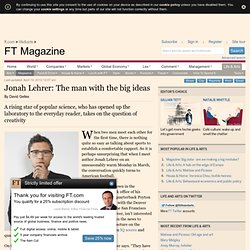 So it is perhaps unsurprising that when I meet author Jonah Lehrer on an unseasonably warm Monday in March, the conversation quickly turns to American football. Just before we sit down in the downtown New York office of his publisher, the star quarterback Peyton Manning has signed with the Denver Broncos, spurning the San Francisco 49ers. How Do We Identify Good Ideas? I’ve always been fascinated by the failures of genius. 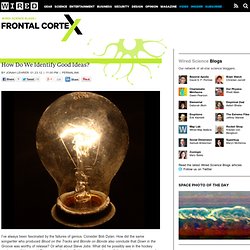 Consider Bob Dylan. 3 Critical Insights Into Creativity From Jonah Lehrer's "Imagine" Designers spend a lot of time giving advice to each other. 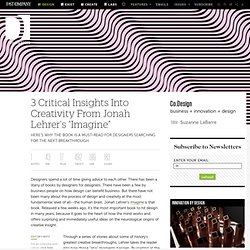 There has been a litany of books by designers for designers. There have been a few by business people on how design can benefit business. Talent or Practice – What Matters More? Gary Marcus Gary Marcus is Professor of Psychology at NYU, the author of Guitar Zero: The New Musician and The Science of Learning , and editor of The Norton Psychology Reader. 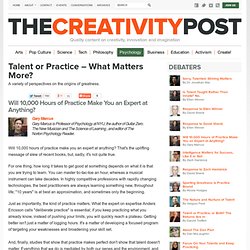 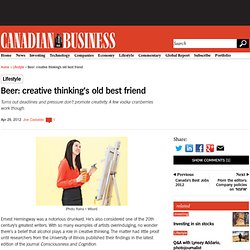 He’s also considered one of the 20th century’s greatest writers. With so many examples of artists overindulging, no wonder there’s a belief that alcohol plays a role in creative thinking. The matter had little proof until researchers from the University of Illinois published their findings in the latest edition of the journal Consciousness and Cognition. The researchers plied one group of male participants with vodka cranberries to get them “moderately” intoxicated. The Great American Novel. I know that I am not alone in this feeling. 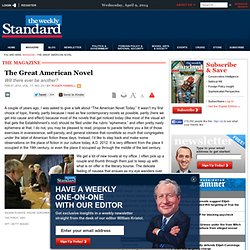 Indeed, whenever I mention the contemporary novel to friends, the reaction tends to alternate between bemusement and distaste. The bemusement comes from those who are at a loss to think of any current American novels I might wish to talk about. “I’ll check my bookshelves when I get home,” one well-read wag with a large private library wrote me, “to see if I have any contemporary American novels.” 3 Ways To Design Toys That Boost Kids' Creativity. Quick, find a cardboard box, a magic marker, scissors, one roll of tape, and three everyday objects on your desk.

Your task: Build an intergalactically awesome spaceship using just these parts. You have five minutes to complete this mission before this webpage 404s. 3-2-1 … go! (Seriously, you should do this--it’s fun.) Now that your ship’s out of the hangar and ready for liftoff, let’s look back on the design decisions you made along the way. How does your ship fly? Fun as it may have been, the past five minutes have actually been quite educational (surprise!).

Related:  Jonah Lehrer on How to Be Creative   -  Education   -  Enterprise