Getting What You Want

Micro expressions test. What are microexpressions? After taking just one look at someone, why do we sometimes immediately know we don't like him or her? 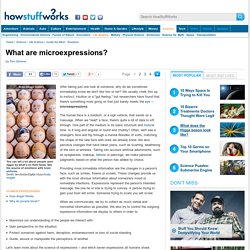 We usually chalk this up to instinct, intuition or a "gut feeling," but researchers have found that there's something more going on that just barely meets the eye -- microexpressions. The human face is a medium, or a sign vehicle, that sends us a message. When we "read" a face, there's quite a lot of data to sift through. One part of the medium is its basic structure and muscle tone. Is it long and angular or round and chubby? Micro Expressions - Research, Theory & Lying.

Interesting Info -> Lying Index & Body Language -> Micro Expressions Is the show "Lie to Me" for real? 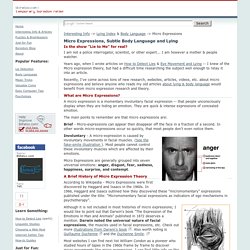 I am not a police interrogator, scientist, or other expert... I am however a mother & people watcher. Years ago, when I wrote articles on How to Detect Lies & Eye Movement and Lying -- I knew of the Micro expression theory, but had a difficult time researching the subject well enough to relay it into an article. Guide to Reading Microexpressions - Science of People. Learning how to decode the face is like having a super power. 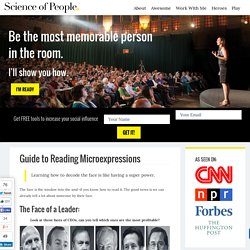 The face is the window into the soul–if you know how to read it. The good news is we can already tell a lot about someone by their face. The Face of a Leader: Look at these faces of CEOs, can you tell which ones are the most profitable? In this study by Nicholas Rule and Nalini Ambady, researchers asked participants to rate these CEO’s based on their picture. Micro Expressions - Paul Ekman Group, LLC. Micro expressions are very brief facial expressions, lasting only a fraction of a second. 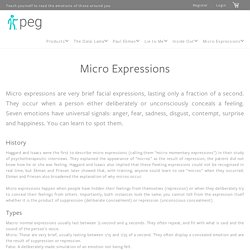 They occur when a person either deliberately or unconsciously conceals a feeling. Seven emotions have universal signals: anger, fear, sadness, disgust, contempt, surprise and happiness. You can learn to spot them. History Haggard and Isaacs were the first to describe micro expressions (calling them “micro momentary expressions”) in their study of psychotherapeutic interviews. Micro expressions happen when people have hidden their feelings from themselves (repression) or when they deliberately try to conceal their feelings from others. Types. Correcting Hollywood Science: The Microexpressions of Mike Daisey Edition. This past weekend I spent too many hours on Netflix watching Lie to Me, the Fox television drama that ran from 2009 to 2011. 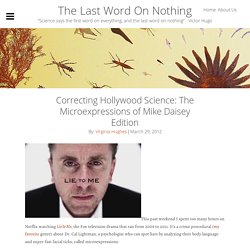 It’s a crime procedural (my favorite genre) about Dr. Cal Lightman, a psychologist who can spot liars by analyzing their body language and super-fast facial ticks, called microexpressions. On the show, Lightman’s obsession with faces stems from a decades-old film of his mother recorded by her therapist. She had been institutionalized for depression, but on the film, she tells the therapist how good she feels after treatment, and how she longs to see her children.

The Real Science Behind Lie to Me - Lie to Me Episodes. If Fox's Fringe is full of junk science (including people who walk through walls and communicate with the dead), then Lie to Me, the network's newest law enforcement-themed drama, is just the opposite. 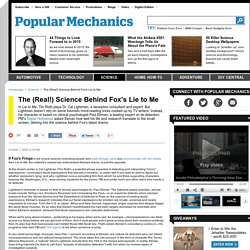 At the show's center is Cal Lightman (Tim Roth), a scientist whose expertise is detecting and interpreting "micro" expressions—involuntary facial expressions that last just a moment—a useful skill if you want to want to figure out whether someone's lying, and why. Lightman runs a consulting firm from which he and three supporting characters traverse the Washington, D.C., area solving mysteries for the police, FBI and pretty much any other client who needs a lie detector.

Lightman's character is based on that of clinical psychologist Dr. Paul Ekman. When we're lying about emotion—pretending to be happy when we're sad, for example—microexpressions can flash across our faces before we can get hold of them. How to Detect Lies - body language, reactions, speech patterns. 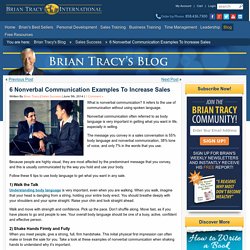 It refers to the use of communication without using spoken language. Nonverbal communication often referred to as body language is very important in getting what you want in life, especially in selling. The message you convey in a sales conversation is 55% body language and nonverbal communication, 38% tone of voice, and only 7% in the words that you use. Because people are highly visual, they are most affected by the predominant message that you convey, and this is usually communicated by the way you hold and use your body. Follow these 6 tips to use body language to get what you want in any sale. 1) Walk the Talk Understanding body language is very important, even when you are walking.

Walk and move with strength and confidence. 2) Shake Hands Firmly and Fully. 11 Ways to Use Body Language to Get What You Want. Asking for a raise makes most people anxious. 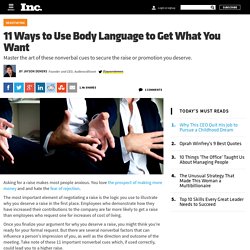 You love the prospect of making more money and and hate the fear of rejection. The most important element of negotiating a raise is the logic you use to illustrate why you deserve a raise in the first place. Employees who demonstrate how they have increased their contributions to the company are far more likely to get a raise than employees who request one for increases of cost of living. Once you finalize your argument for why you deserve a raise, you might think you're ready for your formal request. But there are several nonverbal factors that can influence a person's impression of you, as well as the direction and outcome of the meeting. 1. Eye contact can make or break your presence in a meeting, since it simultaneously conveys confidence, attention, and trust. 2. The common advice is to dress for the job you want, not the job you have, and for raise negotiations, this is absolutely true. 3. 4. 5. 6.

Might be an economist, but he wants to talk about language. For instance, he points out, in Chinese, saying “this is my uncle” is not as straightforward as you might think. In Chinese, you have no choice but to encode more information about said uncle. The language requires that you denote the side the uncle is on, whether he’s related by marriage or birth and, if it’s your father’s brother, whether he’s older or younger.

“All of this information is obligatory. Hidden Cues That Sway You. Your words matter. Often what happens when people are just talking to each other in their everyday lives is that they are just talking and talking and no one is really listening. Then when every once in a while somebody does listen, they have some kind of overreaction to what someone said or how someone said it; therefore, there’s a great deal of miscommunication going on, and you don’t create a sense of intimacy and connection between you and the other person. Most of the time when people speak to each other, they’re doing a number of things that ultimately don’t lead to good communication.

For one, people are very reactive in the ways that they respond; they hear something and, even before they realize what they’re hearing, they have emotional responses.