Why New Urbanism Fails. Since the early 1990s New Urbanism has slowly gathered strength, a building storm that finally burst onto the American mainstream only a few years ago. 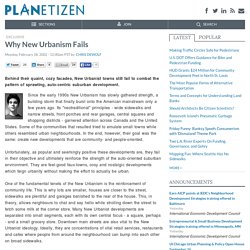 Its "neotraditional" principles - wide sidewalks and narrow streets, front porches and rear garages, central squares and shopping districts - garnered attention across Canada and the United States. Some of the communities that resulted tried to emulate small towns while others resembled urban neighbourhoods. In the end, however, their goal was the same: create new developments that are community- and people-oriented. Unfortunately, as popular and seemingly positive these developments are, they fail in their objective and ultimately reinforce the strength of the auto-oriented suburban environment. They are feel-good faux-towns, cosy and nostalgic developments which feign urbanity without making the effort to actually be urban. Big S.F. zoning changes could unlock housing opportunities in development-averse neighborhoods.

San Francisco’s Board of Supervisors will debate legislation that would relax height and density limits this fall to spur housing projects in neighborhoods like the Marina, Richmond, Western Addition and Sunset – where development can be a third rail. 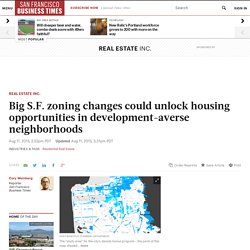 Under a proposal by the Planning Department, developers would be able to build two stories taller than they’re allowed in some parts of the city – or get some relief on city requirements for building parking, rear yard or open space – in exchange for reserving more units for low- and middle-income residents. The so-called density bonus program was designed to unlock housing possibilities on underused sites in parts of the city that restrict the number of units that can be built by the size of the property, said Kearstin Dischinger of the Planning Department. “This program could help turn that balance and we’d see more distributed development around the city, not just development based on just on eastern side,” Dischinger said. Bonus points. Zoning Reform Can't Fix Everything. It's easy to find the critical flaw in the zoning reformer's argument, if you remember this truism -- there is greater variation within metro areas than between them. 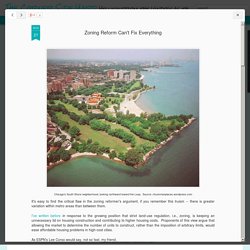 I've written before in response to the growing position that strict land-use regulation, i.e., zoning, is keeping an unnecessary lid on housing construction and contributing to higher housing costs. Proponents of this view argue that allowing the market to determine the number of units to construct, rather than the imposition of arbitrary limits, would ease affordable housing problems in high-cost cities. As ESPN's Lee Corso would say, not so fast, my friend. It sounds perfectly reasonable to believe this. It has a seductive logic. My recent post on the relationship between city density and housing vacancy bears this out. Low density/high vacancy (LD/HV)Low density/low vacancy (LD/LV)High density/high vacancy (HD/HV)High density/low vacancy (HD/LV) Photographing the Downtown 'Parking Problem' in St. Paul's Lowertown District.

To hear USA Today describe it, the Lowertown district in downtown St. 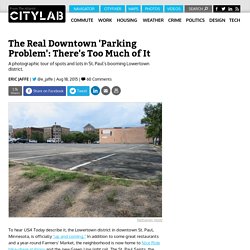 Paul, Minnesota, is officially “up and coming.” In addition to some great restaurants and a year-round Farmers’ Market, the neighborhood is now home to Nice Ride bike-share stations and the new Green Line light rail. The St. Paul Saints, the city’s indy pro baseball club, started playing at the new CHS Field in Lowertown this spring. But to hear the local papers describe Lowertown, the area’s emergence at a downtown destination has come with a severe parking shortage. Jack Gerten, who manages the Farmers' Market for the city, said he was trying to balance the needs of residents, potential area business patrons and the Saints. Local transportation planner and blogger Nathaniel Hood sees things a bit differently. A couple years ago, during a period of heated local debates about Lowertown parking, he mapped the abundance of off-street lots and parking garages (below, in blue) to further spotlight the “problem”: Google Maps Area Calculator Tool. Output : Current Area 0 m² 0 km² 0 acres 0 hectare 0 square feet 0 square miles 0 square nautical miles Current Perimeter Output : Total Area(s) 0.00 m² 0.00 km² 0.00 acres 0.00 hectares 0.00 feet² 0.00 square miles 0.00 square nautical miles Description This tool allows you to use Google Maps to define an area and then find out the measurement of the enclosed area. 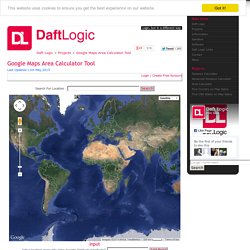 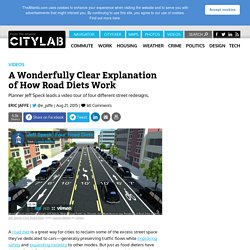 A road diet is a great way for cities to reclaim some of the excess street space they’ve dedicated to cars—generally preserving traffic flows while improving safety and expanding mobility to other modes. But just as food dieters have Atkins, South Beach, vegan, and any number of options, road diets come in many flavors, too. Urban planner and Walkable City author Jeff Speck, in collaboration with graphic artist Spencer Boomhower, takes us on a tour of four types of street diets in a deliciously clear new video series.