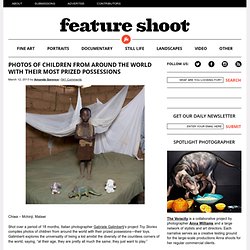 Galimberti explores the universality of being a kid amidst the diversity of the countless corners of the world, saying, “at their age, they are pretty all much the same; they just want to play.” But it’s how they play that seemed to differ from country to country. Galimberti found that children in richer countries were more possessive with their toys and that it took time before they allowed him to play with them (which is what he would do pre-shoot before arranging the toys), whereas in poorer countries he found it much easier to quickly interact, even if there were just two or three toys between them. There were similarites too, especially in the functional and protective powers the toys represented for their proud owners. Stella – Montecchio, Italy Pavel – Kiev, Ukraine. These 20 powerful photos of kids’ bedrooms will change the way you look at the world.

Like us on FB: Where Children Sleep is a powerful photo series by English photographer James Mollison. 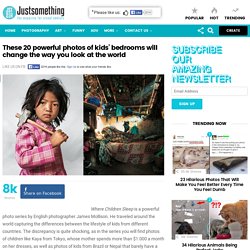 He traveled around the world capturing the differences between the lifestyle of kids from different countries. The discrepancy is quite shocking, as in the series you will find photos of children like Kaya from Tokyo, whose mother spends more than $1.000 a month on her dresses, as well as photos of kids from Brazil or Nepal that barely have a roof over their heads. Save the Children Italy supported the two year long process needed to complete this series that now is also available as a book, where each portrait and bedroom photos are accompanied by an extended caption that tells the story of each child. If you are interested in the book this is the Amazon link, while if you want to see some other work by James Mollison here’s his personal website: jamesmollison.com. If you like justsomething.co share this post with your friends via Facebook or Twitter. Anonymous, 9, Ivory Coast (via)

10 of the Most Dangerous Journeys to Schools Around the World. Kids walk in a straight line on an extremely steep cliff to get to Banpo Primary School in China, on March 12, 2013. 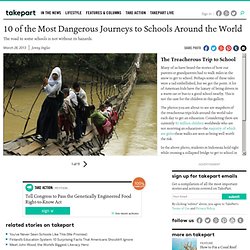 The school is in Shengji county, Bijie city, in Guizhou province. Leading the kids is Xu Liangfan, the 37-year-old headmaster who also teaches mathematics and gym class. Located halfway up a mountain, the school has 68 students, of which about 20 live in the nearby Gengguan village. The narrow path the students are walking along was carved from cliffs over 40 years ago. It is the only route between Gengguan village and the school, according to local media. China's strong education system, according to The Competition that Really Matters, (a report released by the Center for American Progress), will make the country "increasingly competitive in sophisticated industries.

" The report states: "China faces massive challenges, including rising inequality and inferior educational quality and access to schools in rural and migrant populations. " (Photo: Stringer/Reuters) 25 Of The Most Dangerous And Unusual Journeys To School In The World. To the delight (or dismay) of millions, the school season is beginning in many countries throughout the world. 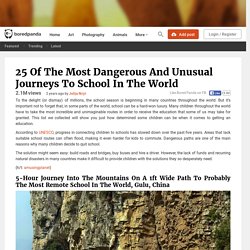 But it’s important not to forget that, in some parts of the world, school can be a hard-won luxury. Many children throughout the world have to take the most incredible and unimaginable routes in order to receive the education that some of us may take for granted. This list we collected will show you just how determined some children can be when it comes to getting an education. According to UNESCO, progress in connecting children to schools has slowed down over the past five years. Areas that lack suitable school routes can often flood, making it even harder for kids to commute.

The solution might seem easy: build roads and bridges, buy buses and hire a driver. (h/t: amusingplanet) 25 Of The Most Dangerous Journeys To School In The World. Chinese children climb ladders to get home from school.