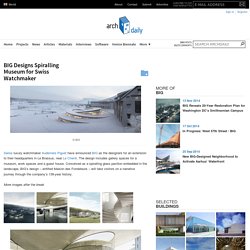 The design includes gallery spaces for a museum, work spaces and a guest house. Conceived as a spiralling glass pavilion embedded in the landscape, BIG’s design – entilted Maison des Fondateurs – will take visitors on a narrative journey through the company’s 139-year history. More images after the break The spiralling form was conceived as a response to a programmatic requirement, which called for a succession of galleries and workshops, however the logistics of the workshops required them to be connected. The spiral shape allows the workshops to be spread along the narrative path through the building, while being physically adjacent. Museum of Contemporary Art in Rome / Studio Odile Decq. Architects: Studio Odile Decq Location: Piazza Orazio Giustiniani, 4, 00153 Rome, Italy Area: 12000.0 sqm Year: 2007 Photographs: Odile Decq – L. 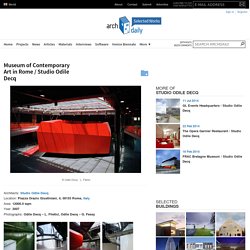 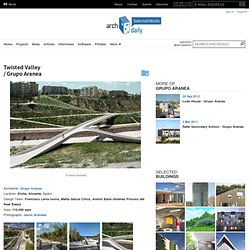 The twisted valley aims to recover the pedestrian’s traffic footprint. Since the channeling works that were made in the 70s definitely skewed Elche’s Canyon continuity. For years the citizens of the city went through this place hardly enjoying it. This landform (which reaches 40 meters deep) gives the city a chance to travel in a few minutes to an area of high environmental quality. The system aims to give voice to the Vinalopó river. BIG, OMA, Büro-OS To Compete for New Media Campus in Berlin (459301) Trinity gest house-sudio mumbai. *An Indian By Design Exclusive* Bijoy Jain’s works remind me of a refuge, a sanctuary. 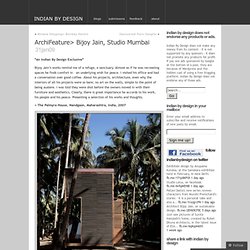 Almost as if he was recreating spaces he finds comfort in – an underlying wish for peace. I visited his office and had a conversation over good coffee. About his projects, architecture, even why the interiors of all his projects were so bare; no art on the walls, simple to the point of being austere. House om-Sou Foujimoto. Friends of the High Line. Solomon R. Guggenheim Museum, New York. Wright's inverted-ziggurat design was not built until 1959. 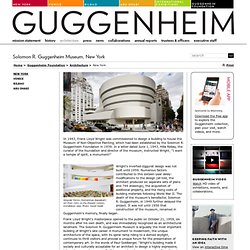 Numerous factors contributed to this sixteen-year delay: modifications to the design (all told, the architect produced six separate sets of plans and 749 drawings), the acquisition of additional property, and the rising costs of building materials following World War II. The death of the museum's benefactor, Solomon R. Guggenheim, in 1949 further delayed the project. It was not until 1956 that construction of the museum, renamed in Guggenheim's memory, finally began. Frank Lloyd Wright's masterpiece opened to the public on October 21, 1959, six months after his own death, and was immediately recognized as an architectural landmark. Solomon R. Frank Lloyd Wright's original plans for the Solomon R. 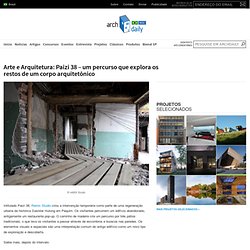 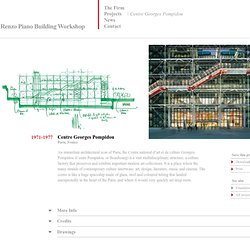