A Short History of Letter Writing. When I went to the post office today, I was assailed by a group of young folk wearing skinny jeans and beatnik glasses. 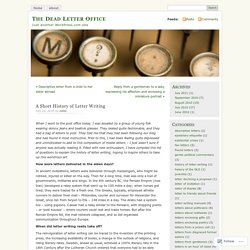 They looked quite fashionable, and they had a bag of letters to post. They told me that they had been following our blog and had found it most instructive. Prior to this, I had been feeling quite depressed and unmotivated to add to this compedium of model letters – I just wasn’t sure if anyone was actually reading it. Filled with new enthusiasm, I have compiled this list of questions to explain the history of letter writing, hoping to inspire others to take up this wondrous art. How were letters delivered in the olden days? In ancient civilizations, letters were delivered through messengers, who might be robbed, injured or killed on the way. When did letter writing really take off? In England, between 1500 and 1900, literacy rates rose from 10 to 95% for men, and from less than 5% to 95% for women.

Until this point, it was assumed that only men wrote letters. Like this: Letters Without Envelopes. Lakshmi Pratury: The lost art of letter-writing. History_of_handwritten_letters. Story telling, song, festivals and initiations are just some of the many ways people of the past tried to preserve their traditions and memories. 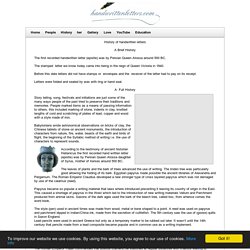 People marked items as a means of passing information to others, this included marking of stone, indents in clay, knotted lengths of cord and scratching of plates of lead, copper and wood with a style made of iron. Babylonians wrote astronomical observations on bricks of clay, the Chinese tablets of stone on ancient monuments, the introduction of characters from nature, fire, water, beasts of the earth and birds of flight, the beginning of the Syllabic method of writing i.e. the use of characters to represent sounds. According to the testimony of ancient historian Hellanicus the first recorded hand written letter (epistle) was by Persian Queen Atossa daughter of Syrus, mother of Xerxes around 500 BC.

The leaves of plants and the bark of trees advanced the use of writing. The linden tree was particularly good allowing the folding of its bark. Rice graduate student translates an ancient letter from a Roman soldier. Letter Writing in America. History of the USPS. In Colonial times, mail was simply delivered by friends, merchants and Native Americans. 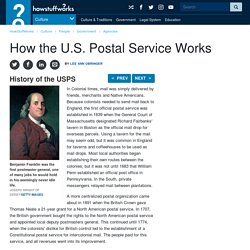 Because colonists needed to send mail back to England, the first official postal service was established in 1639 when the General Court of Massachusetts designated Richard Fairbanks' tavern in Boston as the official mail drop for overseas parcels. Using a tavern for the mail may seem odd, but it was common in England for taverns and coffeehouses to be used as mail drops. Most local authorities began establishing their own routes between the colonies, but it was not until 1683 that William Penn established an official post office in Pennsylvania.

In the South, private messengers relayed mail between plantations. A more centralized postal organization came about in 1691 when the British Crown gave Thomas Neale a 21-year grant for a North American postal service. Advertisement The Boston riots in 1774 led to the creation of the Continental Congress and the beginnings of an independent government. U.S. Postal System Established. On July 26, 1775, the U.S. postal system is established by the Second Continental Congress, with Benjamin Franklin as its first postmaster general. 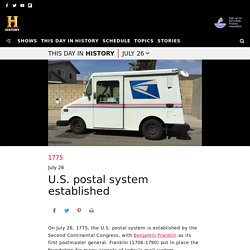 Franklin (1706-1790) put in place the foundation for many aspects of today’s mail system. During early colonial times in the 1600s, few American colonists needed to send mail to each other; it was more likely that their correspondence was with letter writers in Britain. Mail deliveries from across the Atlantic were sporadic and could take many months to arrive. There were no post offices in the colonies, so mail was typically left at inns and taverns. In 1753, Benjamin Franklin, who had been postmaster of Philadelphia, became one of two joint postmasters general for the colonies. READ MORE: 11 Surprising Facts About Benjamin Franklin In 1774, the British fired Franklin from his postmaster job because of his revolutionary activities. READ MORE: 11 Surprising Facts About Benjamin Franklin.