Google+ Launches Tools for Businesses. After a private beta test period, Google is releasing on Wednesday a suite of business tools for Google+ users. 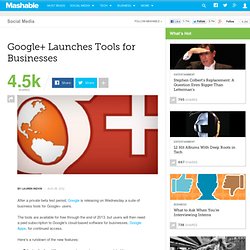 The tools are available for free through the end of 2013, but users will then need a paid subscription to Google's cloud-based software for businesses, Google Apps, for continued access. Here's a rundown of the new features: Private sharing. When you create a post, you can now label it as "restricted. " This will limit its visibility to those inside your organization (plus a few external partners if you so choose), and can't be re-shared with anyone on the outside.Administrative controls. In a blog post, Google said these new features were just the beginning. Social Media: Engage With Your Audience As A Whole Person – [video] Patton Oswalt’s Letters to Both Sides: His keynote address at Montreal’s Just For Laughs 2012. After stirring keynote speeches by Lewis Black and Marc Maron over the past couple of years, Patton Oswalt took to the stage adjacent to the Hyatt lounge on Thursday afternoon to deliver the third annual keynote for the Just For Laughs Comedy Conference in Montreal. 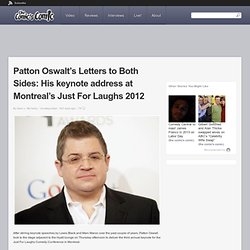 Oswalt employed self-deprecation right off the bat, joking that he was far from JFL's first choice to address the comedians, industry and fans in the audience. "Luckily for me, none of them could be bothered to wake up before 1 p.m. ," he said. He also noted with sarcasm that in a year in which comedy has come under the microscope of the media and bloggers, of course, a "straight white male" should be the comedy community's representative to make sense of it all. Speaking of which, he added: "People are referring to us as the comedy communtiy -- thats how fucked up things are right now. " Instead of a straight speech, Oswalt wrote two open letters and read them aloud. Here are those letters. Dear comedian in 2012:How are you? A Definition and Explanation. Brooke Thompson : GiantMice.com. Personalizemedia. Universe Creation 101. Alliteration Ink News: Eighth Day Genesis: A Worldbuilding Codex.

The news resource for fictional characters, legendary creatures, their fans and creators. Christy's Corner of the Universe: cross-platform, creative practice, strategy, research, marketing, life... Community of Storytellers Build Online Library of Human Experience. The online project Cowbird is a place where storytellers can keep audio-visual diaries, write stories and collaborate with others in documenting “sagas” taking place in the world, like the Occupy movement. 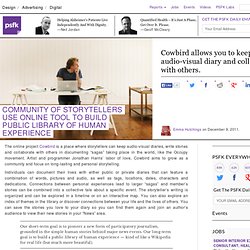 Artist and programmer Jonathan Harris’ labor of love, Cowbird aims to grow as a community and focus on long-lasting and personal storytelling. Individuals can document their lives with either public or private diaries that can feature a combination of words, pictures and audio, as well as tags, locations, dates, characters and dedications. Connections between personal experiences lead to larger “sagas” and member’s stories can be combined into a collective tale about a specific event. The storyteller’s writing is organized and can be explored in a timeline or on an interactive map. You can also explore an index of themes in the library or discover connections between your life and the lives of others. Cowbird. Small Demons — Welcome to the Storyverse. Shared Story Worlds.