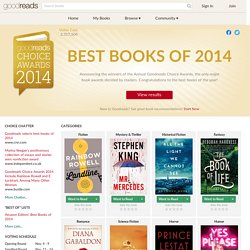 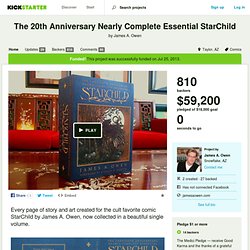 Bookseller's Pledge will get one of each. Most people know my work through the series of illustrated novels I created, The Chronicles of the Imaginarium Geographica, but not all of my readers realize that this series was not my first extended work of fantastic fiction. More than twenty years ago, I began writing and illustrating a massive graphic novel I called StarChild. Released first as a series of comic books, the stories were later collected into two volumes: AWAKENINGS, and CROSSROADS. A third volume, MYTHOPOLIS, was never completed. New Charles Vess Drawings for Neil Gaiman’s Stardust. Anyone following Charles Vess on Facebook is often treated with peeks at the various books and projects he is working on. 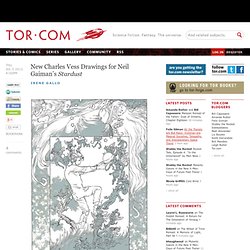 It seems HaperCollins has asked his to do a few additional drawings for an upcoming edition of his and Neil Gaiman’s Stardust. To which I say, hurray! An in-progress for a full color painting to go into a limited edition: Update: Neil Gaiman just posted the finished art for the sketch below. Irene Gallo is the Art Director of Tor Books. Osprey Publishing - Military History Books - Blog - Where the magic happens - from the desk of an Osprey author. Ever wondered about what goes into writing a history book? 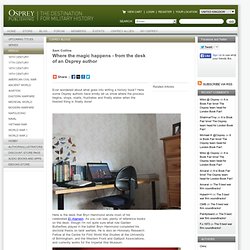 Here some Osprey authors have kindly let us show where the process begins, stops, starts, frustrates and finally elates when the blasted thing is finally done! Here is the desk that Bryn Hammond wrote most of his celebrated El Alamein. As you can see, plenty of reference books on the desk, though I'm not quite sure what role Garden Butterflies played in the battle! Bryn Hammond completed his doctoral thesis on tank warfare. He is also an Honorary Research Fellow at the Centre for First World War Studies at the University of Birmingham, and the Western Front and Gallipoli Associations, and currently works for the Imperial War Museum. Terry Crowdy, author of Incomparable and Incomparable: A Collection of Essays talks us through his writing routine - 'My desk.

Author of Allies at Dieppe Will Fowler at his desk. A Golden Age of Books? There Were Only 500 Real Bookstores in 1931 - Atlantic Mobile. And two-thirds of American counties had no bookstore at all. 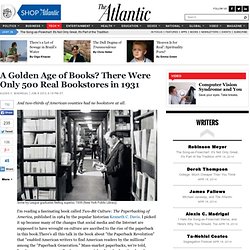 Some Ivy League graduates feeling superior, 1939 (New York Public Library). I'm reading a fascinating book called Two-Bit Culture: The Paperbacking of America, published in 1984 by the popular historian Kenneth C. Davis. I picked it up because many of the changes that social media and the Internet are supposed to have wrought on culture are ascribed to the rise of the paperback in this book.There's all this talk in the book about "the Paperback Revolution" that "enabled American writers to find American readers by the millions" among the "Paperback Generation.

" What should I read next. Alana Joli Abbott Reviews Libriomancer. Lirbriomancer Jim C. 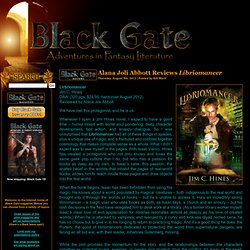 Hines DAW (320 pgs, $24.95, hardcover August 2012) Reviewed by Alana Joli Abbott We have met this protagonist, and he is us. Whenever I open a Jim Hines novel, I expect to have a good time – humor mixed with some soul pondering, deep character development, fast action, and snappy dialogue. So I was unsurprised that Libriomancer had all of these things in spades, plus a unique use of magic and a fractured and cobbled together cosmology that makes complete sense as a whole.

What I didn’t expect was to see myself in the pages. Tanselle's Book-Jackets - The Fine Books Blog. The book world is incredibly lucky to have G. 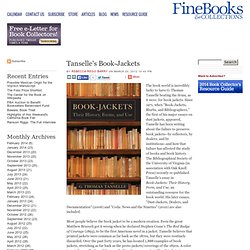 Thomas Tanselle beating the drum, as it were, for book jackets. Since 1971, when "Book-Jackets, Blurbs, and Bibliographers," the first of his major essays on dust jackets, appeared, Tanselle has been writing about the failure to preserve book jackets--by collectors, by dealers, and by institutions--and how that failure has affected the study of books and book history.