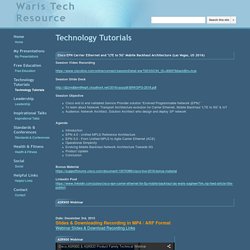 Sourcefire File Policies (aka Advanced Malware Protection) With Sourcefire ASA software modules we are able to control what file types are allowed and what are not to be downloaded or uploaded. 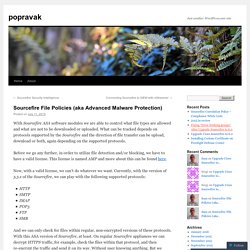 What can be tracked depends on protocols supported by the Sourcefire and the direction of file transfer can be upload, download or both, again depending on the supported protocols. Before we go any further, in order to utilize file detection and/or blocking, we have to have a valid license. This license is named AMP and more about this can be found here. Now, with a valid license, we can’t do whatever we want. Currently, with the version of 5.3.x of the Sourcefire, we can play with the following supported protocols: And we can only check for files within regular, non-encrypted versions of these protocols.

For some of these protocols we can watch for files in both directions, upload and download, for example for FTP, but for some, it makes sense only for uploads, for example with the SMTP. LAN, Switching and Routing. C3750 Switch Family Egress QOS Explained Understanding the Egress QOS Logic on the C3750/C3560/C3750E/C3560E platforms. 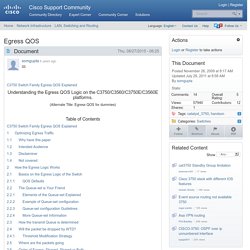 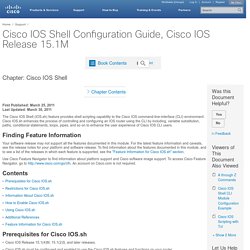 Cisco IOS.sh enhances the process of controlling and configuring an IOS router using the CLI by including, variable substitution, paths, conditional statements, loops, pipes, and so on to enhance the user experience of Cisco IOS CLI users. Finding Feature Information Your software release may not support all the features documented in this module. Use Cisco Feature Navigator to find information about platform support and Cisco software image support. Contents. OSPF - Setting IP MTU values for Cisco and Juniper - The Network Sherpa. MTU mismatches are the primary reason an OSPF adjacency becomes stuck in the EXSTART state. 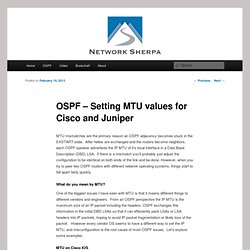 After hellos are exchanged and the routers become neighbors, each OSPF speaker advertises the IP MTU of it’s local interface in a Data Base Description (DBD) LSA. If there is a mismatch you’ll probably just adjust the configuration to be identical on both ends of the link and be done. However, when you try to peer two OSPF routers with different network operating systems, things start to fall apart fairly quickly. One of the biggest issues I have seen with MTU is that it means different things to different vendors and engineers. From an OSPF perspective the IP MTU is the maximum size of an IP packet including the headers. Network Engineering Stack Exchange. MTU Behavior on IOS XR and IOS Routers. IOS XR Software Maintenance Updates (SMUs) 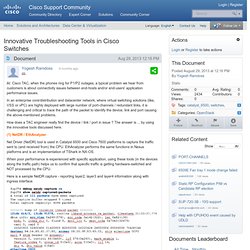 In an enterprise core/distribution and datacenter network, where virtual switching solutions (like, VSS or vPC) are highly deployed with large number of port-channels / redundant links, it is challenging and critical to trace the path of the packet to identify the device, link and port causing the above-mentioned problems. How does a TAC engineer really find the device / link / port in issue ?

The answer is ... by using the innovative tools discussed here. Understanding ELAM. With the increasing complexity of networking devices and protocols, it can be extremely difficult to pinpoint the source of a networking problem. 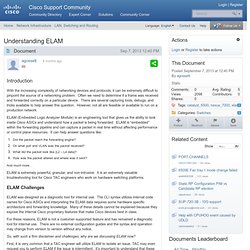 Often we need to determine if a frame was received and forwarded correctly on a particular device. There are several capturing tools, debugs, and tricks available to help answer this question. AAA and VTYs in IOS-XR : Bingo. Continuing on the IOS-XR saga, this is the newest bunch of things that don't "work as expected" (© Cisco). 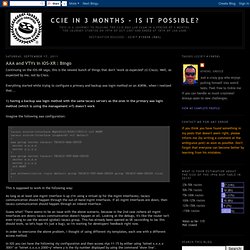 Well, as expected by me, not by Cisco. Everything started while trying to configure a primary and backup aaa login method on an ASR9k, when i realized that... 1) having a backup aaa login method with the same tacacs servers as the ones in the primary aaa login method (which is using the management vrf) doesn't work Imagine the following aaa configuration: ASR9000/XR: The concept of a SMU and managing them. Introduction A SMU is a software maintenance update, or simply put a patch, that can be loaded on the XR device you are running. 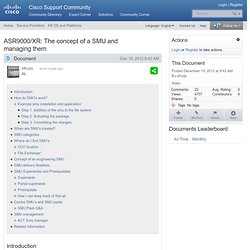 The concept of a SMU applies to all XR devices, although this article focuses on the ASR9000 primarily. When the system is running into a SW deficiency (a.k.a. a bug) Cisco can provide a patch for that particular problem in order for you to keep running your base release, but get free of the problem at hand. This is a substantial difference over the classic IOS that has no capability to apply a single fix in a single component on top of the base release run. BGP Reports. Route Views Project Page.