Private School vs. Public School Breakdown – Niche Blog. The private versus public school debate seems like a tale as old as time.

Probably because people have argued for years about their benefits and drawbacks. However, while both have their advantages, one isn’t necessarily better than the other. Here’s an examination of private and public schools and how to figure out which one may be right for a student. Private Education Thinking about private school? Students and parents may choose to go to private school for a variety of reasons, including religion, the desire for single-sex education, as well as just experiencing a more flexible curriculum, which is something private schools are known for. However, private schools almost guarantee smaller class sizes, since they are exclusive and require special admissions. Public Education Nearly 50 million students enroll in public elementary and secondary schools in the United States, according to the National Center for Education Statistics. 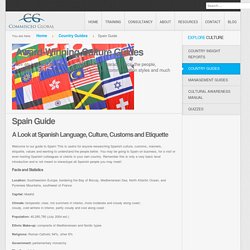 This is useful for anyone researching Spanish culture, customs, manners, etiquette, values and wanting to understand the people better. You may be going to Spain on business, for a visit or even hosting Spanish colleagues or clients in your own country. Spain > Madrid > Historic Events. Spanish History - History of Spain. The history of Spain. 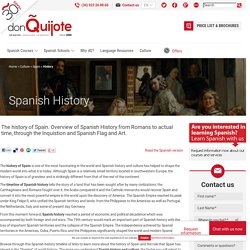 Overview of Spanish History from Romans to actual time, through the Inquistion and Spanish Flag and Art. Spain profile - Timeline. A chronology of key events: 1492 - The Christian Kingdoms of Castile and Aragon conquer the Emirate of Granada, ending nearly 800 years of Muslim rule in the south and founding modern Spain as a united state. 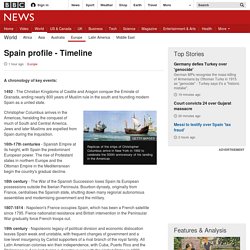 Image copyright Getty Images Christopher Columbus arrives in the Americas, heralding the conquest of much of South and Central America. Jews and later Muslims are expelled from Spain during the Inquisition. Spain - Timeline. A chronology of key events: 1936-39 - Spanish Civil War: more than 350,000 Spaniards killed. 1939 - General Franco leads Nationalists to victory. 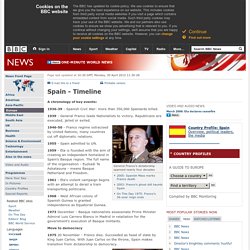 Republicans are executed, jailed or exiled. 1946-50 - Franco regime ostracised by United Nations; many countries cut off diplomatic relations. 1955 - Spain admitted to UN. Key Periods in Spanish History. Spain Time Line Chronological Timetable of Events. The Spain Orwell Never Saw. When conflict broke out in Spain, leftists from around the world were motivated to join. 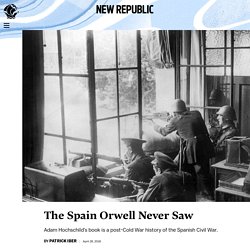 With Hitler and Mussolini supporting Franco, those with deep anti-fascist convictions, especially Communists, were drawn to defend the Republic, and even to fight. “For us it wasn’t Franco,” said one New Yorker quoted by Hochschild, “it was always Hitler.” With most of the army and weapons on the Nationalist side, the Republic would have to depend on militias and international aid if it was to survive. But mustering those two things was at least partially in tension. Spain: Maps, History, Geography, Government, Culture, Facts, Guide & Travel/Holidays/Cities. Geography Spain occupies 85% of the Iberian Peninsula, which it shares with Portugal, in southwest Europe. 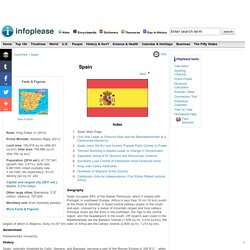 Africa is less than 10 mi (16 km) south at the Strait of Gibraltar. A broad central plateau slopes to the south and east, crossed by a series of mountain ranges and river valleys. Key Events in the History of Spain and the Spanish - Page 3. In the aftermath of the First Carlist War Spanish politics became split between two main factions: the Moderates and the Progressives. 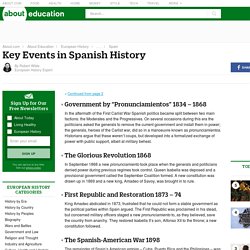 On several occasions during this era the politicians asked the generals to remove the current government and install them in power; the generals, heroes of the Carlist war, did so in a manoeuvre known as pronunciamientos. Historians argue that these weren’t coups, but developed into a formalized exchange of power with public support, albeit at military behest. In September 1868 a new pronunciamiento took place when the generals and politicians denied power during previous regimes took control. Queen Isabella was deposed and a provisional government called the September Coalition formed. Timetoast. Spain Timeline. Spain charges five suspected ETA leaders with crimes against humanity. A Spanish judge has charged five suspected former leaders of the armed Basque separatist movement ETA with crimes against humanity for attacks carried out by the group after 2004 which killed 12 people. 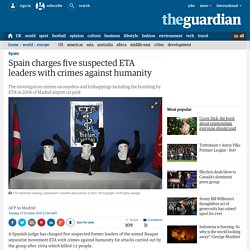 Judge Juan Pablo Gonzalez of the National Audience, which handles terrorism cases, laid the charges on Tuesday as part of a probe into crimes against humanity he began in July in response to a complaint filed by several victims associations. The investigation centres on cases of murder or kidnapping carried out by the group since 1 October 2004, when Spain’s criminal code was amended to include a chapter on crimes against humanity. They include the bombing of a car park at Madrid airport by ETA militants on 30 December2006 in which two Ecuadorian men died.

EuroHist9. A news website that Spain may need to keep an eye on. Pedro J Ramirez is Europe’s top stool-stirrer. 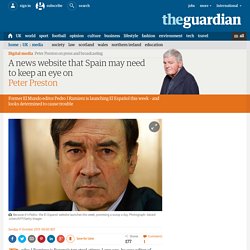 Shredder sought for five million tyres dumped in Spain. Spanish authorities are struggling to dispose of five million tyres dumped on a site close to a housing development north of Toledo. Spain dictionary row: Gypsy 'swindlers' definition clarified as being offensive. US to clean up Spanish radioactive site 49 years after plane crash. Nearly 50 years after a US air force B-52 bomber carrying nuclear weapons crashed in Palomares in south-east Spain, Washington has finally agreed to clean up the radioactive contamination that resulted from the crash. The US secretary of state, John Kerry, and the Spanish foreign minister, José Manuel García-Margallo, signed an agreement in Madrid on Monday to clean up the site and “store the contaminated earth at a suitable location in the United States”. It is thought the radioactive material will be shipped to an area of Nevada already contaminated from nuclear bomb tests carried out in the 1950s. Going under: portraits of the last coal miners.

For the last five years, Pierre Gonnord has been photographing Spain’s last coal miners. At seven pits in Asturias and Castilla y León, he captured an industrial tribe on the brink of extinction. “They told me, ‘Mining is the worst of the worst, we don’t want our children to do this,’” he says. “But we don’t want it to end either because then we will disappear.”

The landscape in this corner of north-west Spain is wild and beautiful: mountains and valleys where locals once scratched a living farming and now work half a mile beneath the fields. In the stone villages are proud communities with deep roots and a history of fighting for workers’ rights: an armed uprising by Asturian miners was a pivotal moment in the lead-up to the Spanish civil war. Current events about Spain thats due 10:22.pages. Catalan president Artur Mas accused of holding illegal referendum. “I myself and the two million Catalans who voted also disobeyed. If they want to summon us all, we will be delighted”, said Antonio Baños, the leader of the 10 representatives of the far-left, pro-independence CUP party in the new Catalan assembly. CUP, whose support Together for Yes needs to have an absolute majority, had said on Monday that it would not be supporting the politically conservative Mr Mas as leader of the next regional government.

Neus Munté, the acting deputy premier in the Catalan administration, said the Spanish government was trying to orchestrate a “political trial” against Mr Mas. “The government’s has put the prosecutors under endless pressure”. 'They banned us speaking Catalan. Now they want us to disappear' Spain's Princess Cristina to stand trial on tax fraud charges.