B: Migration and Christianity in the UK 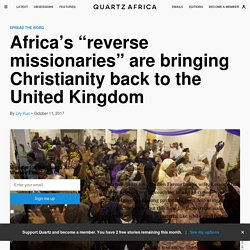 In it Inwe is preaching to a large crowd—not unusual given the young pastor had been delivering sermons in Lagos for years—but this time the faces in the audience aren’t black but white. A material like white sand falls on the building where Inwe and his fictive congregation have gathered. “We later recognized this was snow. There’s definitely no snow in Lagos,” Inwe says, seated at a cafe in York’s old city center of winding lanes and overhanging second-story shops. Today, Inwe leads a church called Hope Centre out of a community center that also hosts mothers’ groups, Zumba classes, and French lessons. They are evangelists from Africa, Asia, and Latin America working to revitalize Christianity in the countries that brought the religion to them. “The fire that we read about in books about this very great country that sent out missions, that same fire was missing,” says Inwe. Inwe isn’t alone. Quartz. 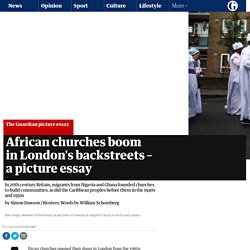 Migrants, many of them from Nigeria and Ghana, sought to build communities and maintain cultural connections with their home countries by founding their own churches, often in private homes, schools and office spaces. A worshipper kneels to pray during a Sunday service at the House of Praise church in Camberwell, south London On a cold, grey Sunday morning, in a street lined with shuttered builders’ yards and storage units, songs of prayer in the West African language of Yoruba ring out from a former warehouse that is now a church. The Syro-Malabar Eparchy of Great Britain « The Diocese of Lancaster. This is only the third Syro-Malabar Eparchy outside of India. 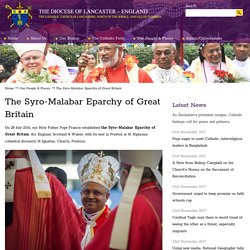 On the same day, Pope Francis appointed Mar Joseph Srampickal, as the first Bishop/Eparch of the new Eparchy. The Syro-Malabar Catholic Church is a Major Archiepiscopal Church in full communion with the Apostolic See of Rome. The Church is headed by its Major Archbishop of Ernakulam-Angamaly, Mar George Cardinal Alencherry. Syro-Malabar Cathedral of St. Alphonsa, Preston. Since January 2015, the church has been used as a cathedral for the Syro-Malabar Catholic Church.[6] On 28 July 2016 Pope Francis[7][4] raised the status of the church to that of cathedral and appointed Messenger Joseph (Benny Mathew) Srampickal as the first bishop.[8] History[edit] Foundation[edit] Prior to the Catholic Emancipation Act of 1829 the first legal Roman Catholic churches were built in a simple style similar to that used for Non-Conformist chapels and often incorporated the priest's house.[9] The church was originally a Jesuit foundation. 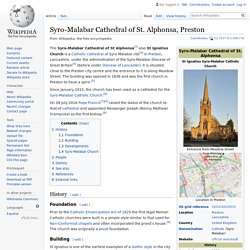 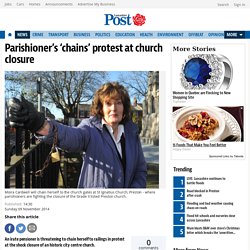 Moira Cardwell will join other angry parishioners demonstrating outside the doomed St Ignatius RC in Preston tomorrow to condemn the “disgraceful” decision to shut it down after 178 years of worship. The rare, pre-Victorian church, with a spectacular interior reputedly designed by world-renowned architect Augustus Pugin, has been earmarked for closure at the end of the month because of a shortage of priests. The 140-strong congregation has been asked to relocate to sister church English Martyrs, almost a mile away. But Moira has vowed to “do an Emmiline Pankhurst” and shackle herself to the church gates, claiming many of the regulars are too old to make the Sunday morning journey for Mass. 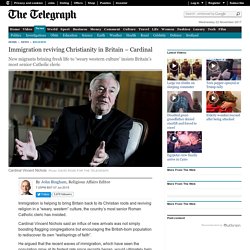 Every parish in the country is to set up an “evangelisation” team and devise new strategies to spread the Christian message in the 21st century. Catholics are being urged to learn from the global success of the Alpha course, the short introduction to Christianity devised by Holy Trinity Brompton, an Anglican parish in London, which has been used by at least 15 million people around the world. The Vicar of Holy Trinity, the Rev Nicky Gumbel, who met Pope Francis last year, will speak alongside Cardinal Nichols at a special conference, entitled “Proclaim 15” in Birmingham this weekend. Religious Census 2011 – What happened to the Christians? (Part II) - British Religion in NumbersBritish Religion in Numbers. As discussed in December 2012 on BRIN, the sharp fall in the ‘Christian’ population has been the big story on religion from the 2011 census. 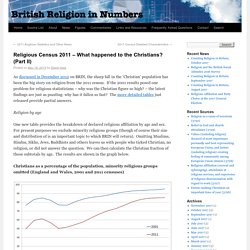 If the 2001 results posed one problem for religious statisticians – why was the Christian figure so high? – the latest findings are just as puzzling: why has it fallen so fast? The more detailed tables just released provide partial answers. Religion by age One new table provides the breakdown of declared religious affiliation by age and sex. Christians as a percentage of the population, minority religious groups omitted (England and Wales, 2001 and 2011 censuses) What happened to the Christians. T3 B Migration test question. Migration AO1 and AO2 skills. Migration an Christianity in the UK questions.