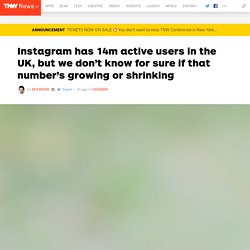 According to the company, 70 percent of its user base is outside the US, but this is the first time it has given region-specific information about its user numbers. Active monthly users are defined by the company as people who log in and use the app or desktop site at least once per month, although that doesn’t have to include posting a picture. Instagram also says that 70 million photos are added each day, and that images on the platform receive a cumulative total of 2.5 billion Likes per day. Of course, while it’s nice to get a general idea of the level of support for Instagram in the UK, the company declined to provide any context around the 14 million user figure. As this is the first time the figure has been disclosed, it’s impossible to say whether that’s a growing or shrinking pool. What Happens Online In 60 Seconds (INFOGRAPHIC) Colehouse Digital 4 Seriously Underused Twitter Features. Twitter is used by all the major brands and most nearly all digital marketers worth their salt, however, there is a lot of functionality people seem to not know about and don’t use. 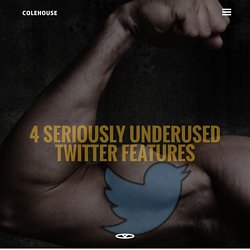 Twitter Cards Twitter cards are expanded tweets with specific and extra functionality. You will have seen them but they are usually served to you as an advert. However, you may not know that these cards are available to every single Twitter user. YouTube Is Losing The Battle For Video. Twitter Opens Its Analytics Dashboard To Everyone. Are Brands Ditching Social Media? 14Jul 2014 Social media still leaves some marketers baffled and only a third are actively employing social to promote new products.

Another third are abandoning social platforms after failing to make them work to their advantage, Decision Marketing reports. The article quotes a new report by Catalogues 4 Business (C4B) as saying that while 31% of businesses in the UK have embraced social media, 20% are yet to undertake the task of developing a social media strategy. Compared to a 2013 study, the results from the new report reveal a 36% drop in usage. GerryMoran : We all need training. Even... Plus.google. How Often Should You Review Your Borrowed Media Strategy? 9 Things From The ’90s That Social Media Replaced. Teens today don’t have it as tough as we did: Answering machines sometimes didn’t record your message. 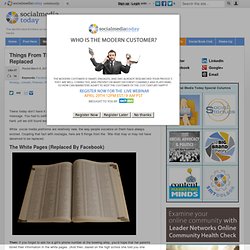 You had to settle for a celebrity’s autograph because you forgot your camera. Times were hard; yet we still found ways to communicate. While social media platforms are relatively new, the way people socialize on them have always existed. Coupling that fact with nostalgia, here are 9 things from the ’90s–that may or may not have deserved to be replaced. The White Pages (Replaced By Facebook) Then: If you forgot to ask for a girl’s phone number at the bowling alley, you’d hope that her parents listed their information in the white pages.

Disposable Cameras (Replaced By Instagram) Then: You wound up the camera, clicked, and prayed that the picture came out. Steve Cole 6 tips For Staying Ahead Of New Social Media Platforms In 2014: Going into the new year many of us are evaluating our situations. 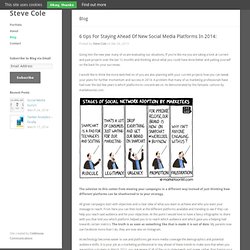 If you’re like me you are taking a look at current and past projects over the last 12 months and thinking about what you could have done better and patting yourself on the back for your successes. I would like to think the more switched on of you are also planning with your current projects how you can tweak your plans for further momentum and success in 2014. A problem that many of us marketing professionals have had over the last few years is which platforms to concentrate on.

How to stay ahead of new social media platforms in 2014. What is the future of Jelly. Instagram Beats Google+ by a KO: Social Ads Drive 2,885% Higher Engagement in Early Test. By Uri Bar-Joseph – December 18, 2013 In the last few weeks, both Instagram and Google+ have announced their ad platforms and opened them as “beta” programs to select brands. 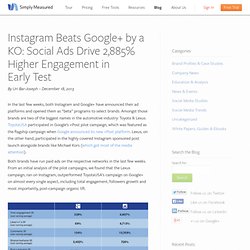 Amongst those brands are two of the biggest names in the automotive industry: Toyota & Lexus. ToyotaUSA participated in Google’s +Post pilot campaign, which was featured as the flagship campaign when Google announced its new +Post platform. Lexus, on the other hand, participated in the highly covered Instagram sponsored post launch alongside brands like Michael Kors (which got most of the media attention). Both brands have run paid ads on the respective networks in the last few weeks. Schtevey : Conceptual map of the internet... Map of the Internet(Quadrant 1) by The9988 on deviantART. Steve Cole 6 tips For Staying Ahead Of New Social Media Platforms In 2014:

For Immediate Release: The Hobson and Holtz Report. FIR Podcast Network News: FIR on Higher Education with Kevin Anselmo debuted on Dec 26, Linked Conversations with Chuck Hester episode 4 posted on Dec 28, FIR on Technology with Dan York coming this week, more new shows in the works; the next episode of The Hobson and Holtz Report marks the start of our tenth year of FIR; 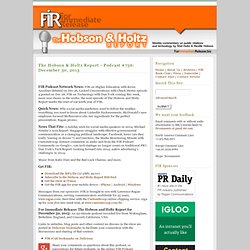 How to stay ahead of new social media platforms in 2014. Umpf : Our Sport #SocialMedia Index... Sport Social Media Index. 'My iPad has Netflix, Spotify, Twitter – everything': why tablets are killing PCs. Stephen Bernasconi walked into Trafford shopping centre on 25 November intending to buy a laptop for £800 or so. 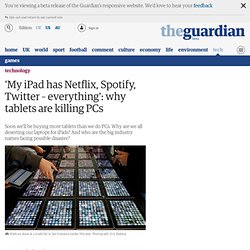 His three-year-old Dell Inspiron had broken down and he wanted something to keep up with gaming. Instead, the 23-year-old walked out of PC World with an iPad Air. "I decided that this would be a more effective purchase as it allows me to do everything I require – Netflix, Spotify, Twitter, good games. It's light and can run loads of apps at once and doesn't slow down. " He'd considered buying a Google Nexus 10 tablet, but having recently switched to an iPhone he decided to stick with Apple. Emma Gilliam, meanwhile, hasn't replaced the Toshiba laptop she used at home since it died in June 2012; she also bought an iPad. 2013 Year on Twitter. The Kellogg’s Twitter row, and why they were so in the wrong.

If you’ve been on Twitter at all over the weekend, there’s a high chance you may have seen the following Tweet from @KelloggsUK… Ironically, I wrote a piece about humanising social media and thinking about content before sending it out less than 24 hours before this Tweet was sent. 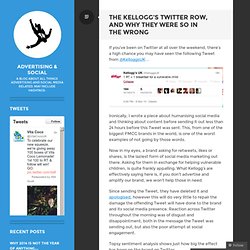 This, from one of the biggest FMCG brands in the world, is one of the worst examples of not going by those words. Now in my eyes, a brand asking for retweets, likes or shares, is the laziest form of social media marketing out there. Asking for them in exchange for helping vulnerable children, is quite frankly appalling. Are You IN? L’Oréal Celebrates Unique Qualities of Its LinkedIn Community. Social Media in the Emerging Markets: India. Guest Post: Aaron Syed Jaffery (@aaronjaffery) is Managing Partner of global digital sport consultancy NineteenEightyFour (nineteeneightyfour.co). 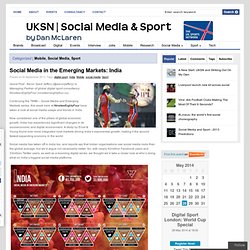 Continuing the TIMBI – Social Media and Emerging Markets series, this week here at NineteeEightyFour have taken a look at social media usage and trends in India. Now considered one of the pillars of global economic growth, India has experienced significant changes in its socioeconomic and digital environment. A study by Ernst & Young found ever more integrated rural markets driving India’s exponential growth, making it the second fastest expanding economy in the world. 26 Signs You Work In Social Media. Burberry's post on Vine. Facebook usage down as marketing concerns grow, claims YouGov. The YouGov SixthSense report, which surveyed 1,995 adults in March, found the proportion of people who had stopped using social media sites after becoming fed up with marketing messages had risen by 18 percentage points from April 2012.

Social Stories / The perfect facebook post. 5 Questions to Ask Yourself Before Implementing a Social Media Strategy. By: Jamey Brown In my head it goes: goal setting – brainstorm – idea pool – checks and balances – strategy – tactics – finished plan. This has been my process for developing strategy plans thus far. Everyone’s strategy development is different, but the overarching themes can be applicable to all. Oh yeah, and strategy (since I see it everywhere and no real description attached) is the high level plan(s) that’s built to achieve certain, pre-determined goals.

Tactics are the executional steps that help achieve the overarching goals of the strategy. 1. Social Media Training.