VMware Storage. Document7.docx. VMware: virtually anything is possible. VMware. CoreOS is currently in heavy development and actively being tested. 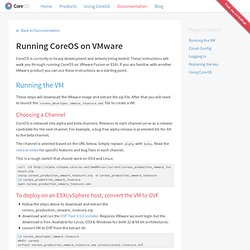 These instructions will walk you through running CoreOS on VMware Fusion or ESXi. If you are familiar with another VMware product you can use these instructions as a starting point. Running the VM These steps will download the VMware image and extract the zip file. After that you will need to launch the coreos_developer_vmware_insecure.vmx file to create a VM. Choosing a Channel CoreOS is released into alpha and beta channels. The channel is selected based on the URL below. HP and VMware’s infrastructure as a service solution. VMware Virtualization for Desktop & Server, Application, Public & Hybrid Clouds. VCP 5 Objective 1.1 – Install and Configure vCenter Server. For this objective I used four documents: VMware vSphere 5.0 – Licensing, Pricing and Packaging White PapervSphere AvailabilityvCenter Server and Host ManagementvSphere Installation and Setup Objective 1.1 – Install and Configure vCenter Server Knowledge. 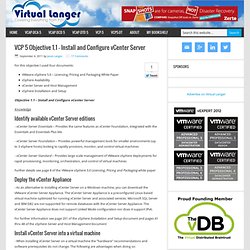 VMware vCenter Design and Installation Options. There have always been questions around why, how, and where VMware’s vCenter should be installed and what design option is best. 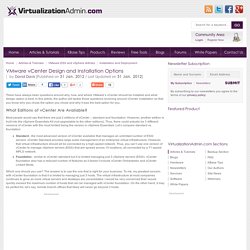 In this article, the author will tackle those questions revolving around vCenter installation so that you know why you chose the option you chose and why it was the best option for you. What Editions of vCenter Are Available? Most people would say that there are just 2 editions of vCenter – standard and foundation. However, another edition is built into the vSphere Essentials Kit (not upgradable to the other editions). Thus, there could actually be 3 different versions of vCenter with the most limited being the version in vSphere Essentials. Standard - the most advanced version of vCenter available that manages an unlimited number of ESXi servers. vCenter Standard provides large scale management of an enterprise virtual infrastructure. 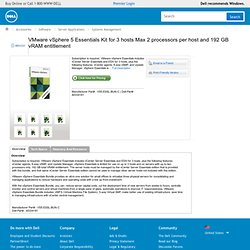 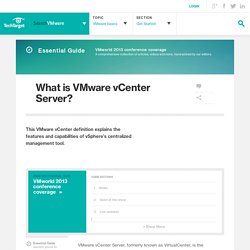 By submitting your email address, you agree to receive emails regarding relevant topic offers from TechTarget and its partners. You can withdraw your consent at any time. Contact TechTarget at 275 Grove Street, Newton, MA. You also agree that your personal information may be transferred and processed in the United States, and that you have read and agree to the Terms of Use and the Privacy Policy. VMware vCenter Server allows for the management of multiple ESX servers and virtual machines (VMs) from different ESX servers through a single console application. All the well-known features in vSphere -- such as VMotion, Storage VMotion, Distributed Resource Scheduler, VMware High Availability and Fault Tolerance -- require vCenter Server. VMware vCenter Server Virtualization & Server Management Software. World's Largest Professional Network. EtherealMind - Software Defined Networking, Data Centre and Infrastructure. 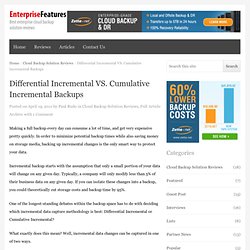 In order to minimize potential backup times while also saving money on storage media, backing up incremental changes is the only smart way to protect your data. Incremental backup starts with the assumption that only a small portion of your data will change on any given day. Typically, a company will only modify less than 5% of their business data on any given day. If you can isolate these changes into a backup, you could theoretically cut storage costs and backup time by 95%.

One of the longest-standing debates within the backup space has to do with deciding which incremental data capture methodology is best: Differential Incremental or Cumulative Incremental? What exactly does this mean? The first – and most efficient – technique would be to perform a single full backup, and then only copy the data which has changed on a daily basis. 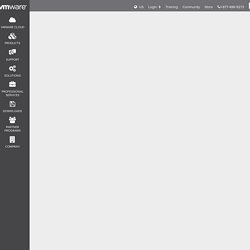 Adding and Modifying Virtual Network Adapters To add a new virtual Ethernet adapter, follow these steps. Be sure the virtual machine to which you want to add the adapter is powered off. To change the configuration of an existing virtual network adapter, follow these steps. Open the Virtual Machine Control Panel (Edit > Virtual Machine Settings). You can view and change the settings for bridged networking on your host. You can decide which network adapters on your host to use for bridged networking. Open a VMware Workstation window. In the DHCP settings dialog box, you can change the range of IP addresses provided by the DHCP server on a particular virtual network. Windows NT Hosts. VMWare Interfaces Tutorial. If you are new to VMWare and the concept of Virtual Machines, or even if you have been working with them for a while but don’t quite understand how the Virtual Machine accesses the network through your host machine, then this article is for you. 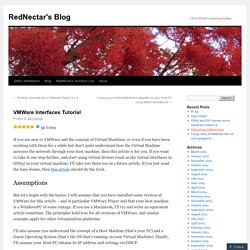 If you want to take it one step further, and start using virtual devices (such as the virtual interfaces in GNS3) in your virtual machine, I’ll take you there too in a future article. If you just want the bare-bones, then this article should do the trick. Assumptions But let’s begin with the basics.