Starting your own business: the best books. If you're a hesitant first-time entrepreneur, here are some great books to get you through those anxious early days... 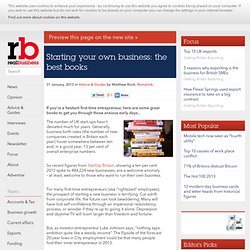 The number of UK start-ups hasn't deviated much for years. Generally, business birth rates (the number of new companies created in Britain each year) hover somewhere between ten and, in a good year, 13 per cent of overall enterprise numbers. So recent figures from StartUp Britain, showing a ten per cent 2012 spike to 484,224 new businesses, are a welcome anomaly – at least, welcome to those who want to run their own business. For many first-time entrepreneurs (aka “rightsized” employees), the prospect of starting a new business is terrifying.

Cut adrift from corporate life, the future can look bewildering. But, as investor-entrepreneur Luke Johnson says, “nothing saps ambition quite like a steady income”. So how do you give yourself the best chance of success? Countless books offer advice to first-time entrepreneurs. The best business books of all time. Shareholders don’t necessarily expect their chief executives to spend time reading business books. Thinking about business, yes. Doing business, definitely. But reading about it? William C. Byham. William C. Byham (born September 14, 1936) is an American entrepreneur, author and organizational psychologist. Overview[edit] Bill Byham, co-founder (with Dr. Douglas Bray), chairman and CEO of Development Dimensions International (DDI) is an industrial organizational psychologist who has developed a number of human resource technologies over the course of his career.

These innovations include the assessment center method, behavior-based interviewing, the use of behavior modeling in supervisor and management training, behavioral job analysis methodology as the basis for selection and training programs, and acceleration pools to rapidly prepare select people for high-level leadership positions. Byham earned a Ph.D. in Industrial Organizational Psychology from Purdue University where he also received an honorary doctorate degree in Social Sciences. Byham founded DDI in the basement of his home in 1970. A prolific author, Byham authored business best-selling book Zapp! Good to Great. The book was a massive bestseller, selling four million copies and going far beyond the traditional audience of business books.[1] Writing[edit] Collins used a large team of researchers who studied "6,000 articles, generated more than 2,000 pages of interview transcripts and created 384 megabytes of computer data in a five-year project".[2] Seven characteristics of companies that went from "good to great"[edit] Level 5 Leadership: Leaders who are humble, but driven to do what's best for the company.First Who, Then What: Get the right people on the bus, then figure out where to go.

Kjell A. Nordström. Kjell Anders Nordström (born 26 February 1958) is a Swedish economist, writer and public speaker.[1] Biography[edit] Born in Skärholmen, a suburban district in southern Stockholm, Nordström grew up on a small island in the Finnish Åland archipelago. His parents returned to Sweden in the 1960s. He was first educated as an engineer and thereafter commenced studies at the Stockholm School of Economics where he earned a Ph.D. in 1991. Barbarians at the Gate: The Fall of RJR Nabisco.

Those opposed to Johnson's bid for the company, Henry Kravis and his cousin George R. Roberts, were among the pioneers of the leveraged buyout. Kravis was the first person Johnson talked to about doing the LBO, and feels betrayed after learning that Johnson wants to do the deal with another firm, American Express's former Shearson Lehman Hutton division. Ted Forstmann and his Forstmann Little buyout firm also played a prominent role. After Kravis and Johnson are unable to reconcile their differences, a bidding war takes place which Johnson will eventually lose.