Design Matters with Debbie Millman by Design Observer on Apple Podcasts. StumbleUpon. Signs, Canada's first restaurant staffed mostly by deaf servers, closes for good. 30 Things To Do In Toronto If You're Broke - Narcity. Elora Quarry Conservation Area - All You Need to Know Before You Go. High Park Toronto Zoo. The zoo inside High Park in Toronto is located on Deer Pen Road and is accessible via the Parkside Road entrance. 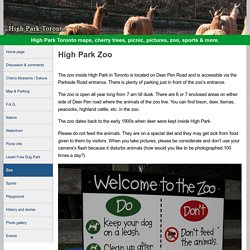 There is plenty of parking just in front of the zoo's entrance. The zoo is open all year long from 7 am till dusk. There are 6 or 7 enclosed areas on either side of Deer Pen road where the animals of the zoo live. You can find bison, deer, llamas, peacocks, highland cattle, etc. in the zoo. The zoo dates back to the early 1900s when deer were kept inside High Park. Please do not feed the animals. View more images of the zoo The High Park zoo is really great for families. There is no admission fee to enter the zoo area.

19 Places In Toronto To Go On A Date During The Holidays. For More Stories Like These Cuffing season is here Toronto, and we want you to make the absolute best of it! 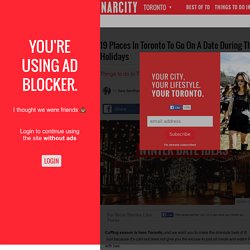 Publishing Curiously Compelling Books Since 1974. An official guide to the crazy science of Orphan BlackDelve deeper into the scientific terms and theories at the core of the Peabody-winning, cult favourite show. 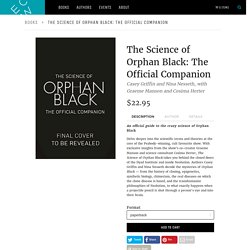 With exclusive insights from the show’s co-creator Graeme Manson and science consultant Cosima Herter, The Science of Orphan Black takes you behind the closed doors of the Dyad Institute and inside Neolution. Authors Casey Griffin and Nina Nesseth decode the mysteries of Orphan Black — from the history of cloning, epigenetics, synthetic biology, chimerism, the real diseases on which the clone disease is based, and the transhumanist philosophies of Neolution, to what exactly happens when a projectile pencil is shot through a person’s eye and into their brain. Casey Griffin is a graduate student pursuing her Ph.D. in developmental and stem-cell biology at the University of Southern California in Los Angeles.

Amazon. RV Show Toronto - 2016 Toronto Camping and RV Show - The Big One. How To Wash & Whiten Yellowed Pillows. At first I hesitated doing this post because it teeters precariously close to over-sharing…but the more research I did, and the more I asked around, I realized that pillows that become yellow over time is a pretty common thing! 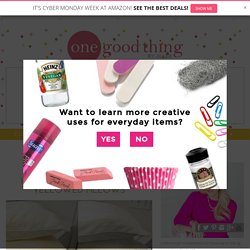 Download the How to Wash & Whiten Yellowed Pillows PDF guide for easy reference. 11 Places To Go Drinking In Toronto If You’re Broke. For More Stories Like These One of the biggest first-world struggles that the average young Torontonian faces is the plight of being a die-hard drinker but also being ridiculously broke. 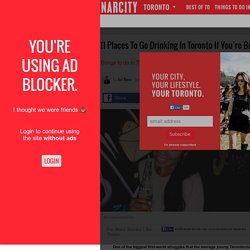 Toronto’s great because there are a lot of things to do in the city that are cheap and are still fun without requiring any alcohol, but such options may not be enough to satisfy those who just freaking love drinking. READ ALSO: 30 Summer Food And Drink Festivals In Toronto Got no money? No problem. 65 Super Fun Toronto Things To Do With Your Significant Other In 2016. For More Stories Like These Spring seems to be already here, and I feel like I didn’t do anything special since the beginning of the year in Toronto. 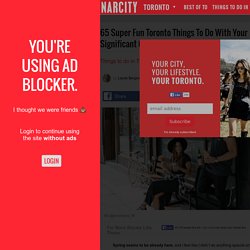 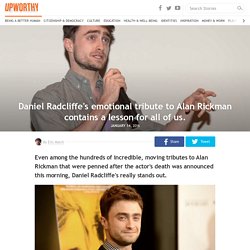 Photo by Jason Merritt/Getty Images. The "Harry Potter" star argues that Rickman's single greatest trait was not his immense talent (although, yes, also his talent), but the utterly respectful and generous way he treated those who looked up to him. Photo by Dimitrios Kambouris/Getty Images. Here's what Radcliffe wrote (emphasis mine): Free national park passes for all in 2017 to mark Canada’s 150th anniversary. The federal government is making entry into the national parks and historic sites free in 2017 as a way to mark the 150th anniversary of Canada’s Confederation. 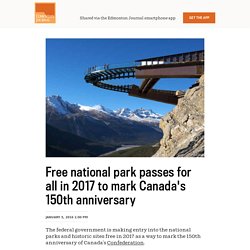 In an emailed statement, Parks Canada said it means any passes purchased this year are valid for two years. “As a first step towards celebrating Canada150, Discovery Passes for 2016 will be valid for 24 months, rather than 12 months,” wrote Parks Canada’s Natalie Fay. 6 Stop Motion Films to Get Animated About. Stop motion animation has taken a back seat due to today’s animated medium of choice: 3D, a phenomenon that has taken the film industry by storm. 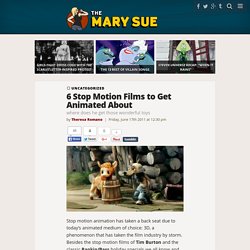 Besides the stop motion films of Tim Burton and the classic Rankin/Bass holiday specials we all know and love, stop motion animation has been a unique storytelling platform for artists around the world for decades. Ep. 1: Paint guns and glow sticks - Crash Gallery. Raised By Wolves – CBC Up Front. Young Drunk Punk – CBC Up Front. From the clever and caustic mind of Bruce McCulloch, YOUNG DRUNK PUNK is an original comedy about the trials and tragedy of growing up on the fringes of society. 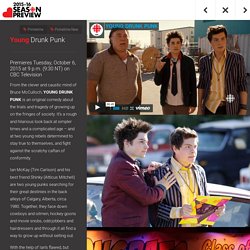 It’s a rough and hilarious look back at simpler times and a complicated age – and at two young rebels determined to stay true to themselves, and fight against the scratchy caftan of conformity. 14 Brilliant Films You Can Watch in the Time It Takes to Eat Lunch. You might have noticed that movies are getting longer these days. Coraline Commentary: 35 Things We Learned. Focus Features Stop-motion animation is a dying art of cinema. Fortunately, the good folks at Laika have been keeping the artistry alive for years. The Boxtrolls is their latest selection to come to theaters, but the process started with Coraline in 2009 and then ParaNorman in 2012.

Www.ontheluce. Www.the-open-mind. Fitness. Www.wanderingearl. Thoughtcatalog. How To Actually Do The Stuff You Say You Want To Do. 50 things to do this spring in Toronto 2015. Spring events and activities are particularly tantalizing this year after the vicious winter we narrowly survived. Neil Gaiman Addresses the University of the Arts Class of 2012. Agoodmovietowatch. The top 5 street festivals in Toronto for spring 2015. Spring has officially arrived in Toronto and with it the promise street festival season. Some movies you don't hear much about. - Album on Imgur. Fast & Furious Workout. How to work the felted join (aka the spit splice) Special Effects & Character Creation Training Tutorials. Hairstyle Tutorial – Big Ponytail Hair Bow. Listverse. Notv. Www.restonic. 7 Minute Work Out. A collection of hand lettering I made this past year. 50 Unpredictable And Non-Clichéd Places To Travel To In Your 20s. Post-grad saving tips. This Guy Did The Coolest, But Possibly Most Illegal, DIY Project Ever. The End Result? It's Genius.

Life Hacks Every Hippie Should Know. 25 Spectacular Movies You (Probably) Haven't Seen. A collection of films short enough to watch in your lunch break. Never Alone: The Kotaku Review. Tutorial: Lettering with Watercolors. How to Draw the Head From Any Angle. 10 Underrated Toronto Landmarks. 11 Things to Do in Toronto Before Summers Over. 25 Spectacular Movies You (Probably) Haven't Seen Pt. 3. 6 Awesome Indie Movies You Should See This Summer. 10 TED Talks That Will Change the Way You Communicate. Man emerges from bunker 14 years after Y2K scare. Here Are 7 DIY Photography Hacks That Everyone Should Know. Why Science Says You Can't Lose Those Last 5 Pounds. Types Of Stretches That Improve Different Parts Of Your Body. 10 MEGA Inspirational Zen Pencils Comics.

30 Challenges for 30 Days. The 30 Best Films of the Decade. 11 Morning Rituals That Can Change Your Life. Lh3.googleusercontent.com. How To Dominate Your City In 10 Easy Steps. Wonder Woman Workout. BlahTherapy - Talk Therapy Online and Counseling Services. The 15 Best Miramax Films. 10 Fascinating Indie Films to watch in 2014.