Girls Aren't Good At Math. 'I'm Not A Math Person' Is No Longer A Valid Excuse. REUTERS/Vasily Fedosenko Contrary to popular opinion, a natural ability in math will only get you so far in studies of the subject. 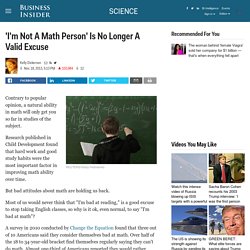 Research published in Child Development found that hard work and good study habits were the most important factor in improving math ability over time. But bad attitudes about math are holding us back. Most of us would never think that "I'm bad at reading," is a good excuse to stop taking English classes, so why is it ok, even normal, to say "I'm bad at math"? A survey in 2010 conducted by Change the Equation found that three out of 10 Americans said they consider themselves bad at math. No Such Thing as a Math Person. When I wrote about fending off math anxiety last month I learned both from the experts I interviewed and from people to whom I happened to mention the topic that math anxiety is found across all lines of gender, ethnicity and educational background. 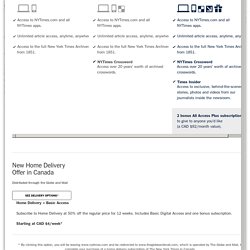 There are plenty of men and women out there, including the highly educated and the professionally aggressive (professors and corporate lawyers, say), who proudly — or shamefacedly — wave the math anxiety flag. Oh yes, that’s me, I don’t have a math brain — though the whole idea of a math brain is frowned on by those who study this topic. There is a general assumption that women are affected more than men, and that math and math anxiety contribute to the barriers that keep women underrepresented in the STEM fields. In my own familial experiment, I have two sons and a daughter, and though everyone managed O.K. in math, the daughter was, without question, the math kid — though the very idea of “math kids” is considered part of the problem. Quit Saying ‘I’m Just Not a Math Person’ It started with a fairly simple problem. 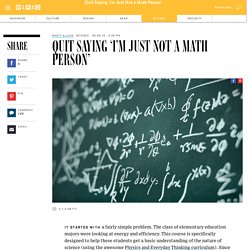 The class of elementary education majors were looking at energy and efficiency. This course is specifically designed to help these students get a basic understanding of the nature of science (using the awesome Physics and Everyday Thinking curriculum). Since the goal is to look at science, we don’t have too much math in the course. However, in this case students were trying to find the power needed such that a fluorescent lightbulb would have the same brightness as an incandescent bulb. In essence, this gives the students a word problem. “I’m just not a math person” First, this is wrong. “But I’m just going to teach 2nd grade” I have some bad news.

Ok, so let’s assume that you do in fact teach second grade. “Algebra is confusing” Yes, that’s true. “Ok, so we should teach math in all grade levels, right?” Math? There are two reasons why everyone should learn to code. Where should you go to start your class with coding? Ok, so let me summarize. The Myth of Being ‘Bad’ at Math – Aspen Ideas – Medium. Advances in neuroscience are revolutionizing our approach to education, and they have particularly weighty implications for the way we teach math. 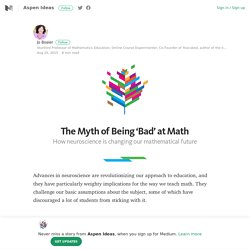 They challenge our basic assumptions about the subject, some of which have discouraged a lot of students from sticking with it. The most popular and damaging of these assumptions has been that some people can do math and others just can’t. Parents believe it, some teachers believe it, and soon enough, the students believe it too. Luckily, the evidence against this notion is piling up, thanks to recent discoveries about human brain plasticity. Some of you might have taken one of London’s famous black cabs, but you may not know how qualified the drivers are. Around the same time as these studies were emerging, a nine-year-old girl had half her brain removed — a hemisphere — because she was having seizures the doctors couldn’t control. Every child can do well in math — all the way to calculus. Teachers and parents have to send the right messages. 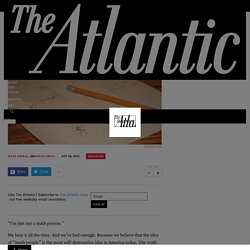 We hear it all the time. And we’ve had enough. Because we believe that the idea of “math people” is the most self-destructive idea in America today. The truth is, you probably are a math person, and by thinking otherwise, you are possibly hamstringing your own career. Worse, you may be helping to perpetuate a pernicious myth that is harming underprivileged children—the myth of inborn genetic math ability. Is math ability genetic?

How do we know this?