Acceleration: Is Moving Ahead the Right Step? When many people hear talk of a 15-year-old student heading to college, their gut reaction is to wonder how a teen could miss out on high school football games and dances, or how a teen could ever fit in with students so much older. 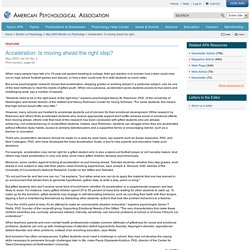 But some psychologists' research shows that acceleration--skipping grades or working ahead in a particular subject--can be one of the best methods to meet the needs of gifted youth. While not a panacea, acceleration gives students access to true peers and challenging work, say a number of experts. "Students need to be in the right place at the right time," explains psychologist Nancy M. Robinson, PhD, of the University of Washington and former director of the Halbert and Nancy Robinson Center for Young Scholars. "For some students, this means that high school would offer very little. " However, many schools are hesitant to accelerate students out of concern for their emotional development. And boredom has other consequences. BC Ministry of Education - Special Programs: Gifted Education. Strategies A variety of approaches can be used to meet the needs of the gifted learner in the regular classroom. 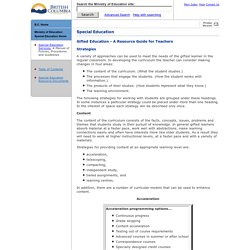 In developing the curriculum the teacher can consider making changes in four areas: The content of the curriculum. (What the student studies.) Creativity in Mathematics and the Education of Gifted Students. Gifted and Talented Students: A Resource Guide for Teachers. Gifted Education. NAGC. No Room for Gifted Kids. Jenn Marshall hadn’t started teaching her son to read. 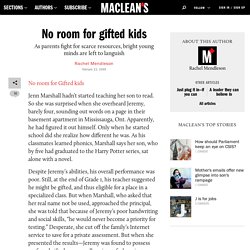 So she was surprised when she overheard Jeremy, barely four, sounding out words on a page in their basement apartment in Mississauga, Ont. Apparently, he had figured it out himself. Only when he started school did she realize how different he was. As his classmates learned phonics, Marshall says her son, who by five had graduated to the Harry Potter series, sat alone with a novel. Despite Jeremy’s abilities, his overall performance was poor. For decades, the nation’s education policy-makers have acknowledged that extreme intellect often comes at a price. According to educators, the problem is nationwide. But as parents intervene, the battles for limited special education dollars become highly polarized. The very notion of extreme intellect as a special need still seems like a stretch to some, and making accommodations for it in tough times a luxury. The following August, the case went to tribunal again.

Sternberg's Triarchic Theory. Successful Interventions for Gifted Learners in Ontario Schools. Teaching the Gifted - Professionally Speaking (Ontario) BY GABRIELLE BAUER and ILLUSTRATION BY RÉMY SIMARD IT'S 9 AM IN THE GRADE 8 CLASSROOM of Rima Srinivasan, OCT. 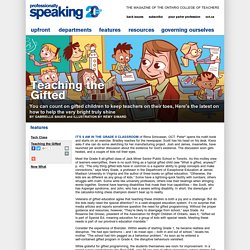 Peter* opens his math book and starts on an exercise. Bradley reaches for the newspaper. Scott has his head on his desk. Kiera asks if she can do some sketching for her manufacturing project. Meet the Grade 8 all-gifted class of Jack Miner Senior Public School in Toronto. Veterans of gifted education agree that teaching these children is both a joy and a challenge. The Many Faces of Acceleration: Creating an Optimal Match for the Advanced Learner. August 29, 2006 "America's school system keeps bright students in line by forcing them to learn in a lock-step manner with their classmates. 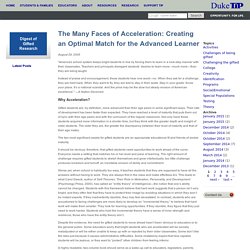 Teachers and principals disregard students’ desires to learn more—much more—than they are being taught. Instead of praise and encouragement, these students hear one word—no. When they ask for a challenge, they are held back. When they want to fly, they are told to stay in their seats. Why Acceleration? Gifted students are, by definition, more advanced than their age peers in some significant ways. The two most significant assets for gifted students are an appropriate educational fit and friends of similar maturity.

It should be obvious, therefore, that gifted students need opportunities to work ahead of the curve. Worse yet, when school is habitually too easy, it teaches students that they are supposed to have all the answers without having to work. Acceleration works. Accelerative Options Choosing among the Options What about your child’s preferences? Triarchic Theory. The triarchic theory of intelligence consists of three subtheories: (i) the componential subtheory which outlines the structures and mechanisms that underlie intelligent behavior categorized as metacognitive, performance, or knowlege acquistion components , (ii) the experiential subtheory that proposes intelligent behavior be interpreted along a continuum of experience from novel to highly familar tasks/situations, (iii) the contextual subtheory which specifies that intelligent behavior is defined by the sociocultural context in which it takes place and involves adaptation to the environment, selection of better environments, and shaping of the present environment. 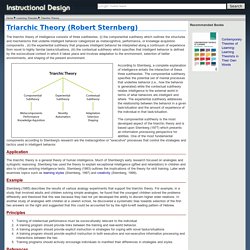 According to Sternberg, a complete explanation of intelligence entails the interaction of these three subtheories. The componential subtheory is the most developed aspect of the triarchic theory and is based upon Sternberg (1977) which presents an information processing perspective for abilities. Application Example Principles.