Mineral oil. Bottle of mineral oil as sold in the U.S. 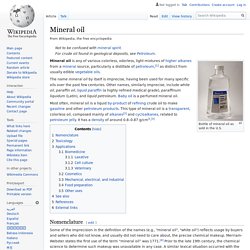 Mineral oil is any of various colorless, odorless, light mixtures of higher alkanes from a mineral source, particularly a distillate of petroleum,[1] as distinct from usually edible vegetable oils. Most often, mineral oil is a liquid by-product of refining crude oil to make gasoline and other petroleum products. This type of mineral oil is a transparent, colorless oil, composed mainly of alkanes[2] and cycloalkanes, related to petroleum jelly. It has a density of around 0.8–0.87 g/cm3.[3] Nomenclature[edit] Some of the imprecision in the definition of the names (e.g., "mineral oil", "white oil") reflects usage by buyers and sellers who did not know, and usually did not need to care about, the precise chemical makeup. "Mineral oil", sold widely and cheaply in the US, is not sold as such in Britain. Toxicology[edit] People can be exposed to mineral oil mist in the workplace by breathing it in, skin contact, or eye contact.

Applications[edit] Unit 24 Spec: Maintenance of Mechanical Systems. Ass 1.1. Lets get the jokes out of the way. Evolution (4/9) Movie CLIP - It's In Me! (2001) HD. Tribology. AirBearingsImperial. Machinery Lubrication. ACEA Engine Oil Specifications - oilspecifications.org. About ACEA The European Automobile Manufacturers' Association (or Association des Constructeurs Européens d'Automobiles in French, hence the ACEA abbreviation) is an organization that represents the 15 most important European motor vehicle manufacturers. 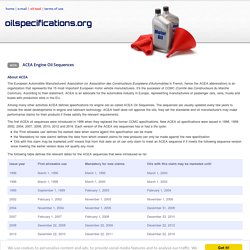 It's the successor of CCMC (Comité des Constructeurs du Marché Commun). According to their statement, ACEA is an advocate for the automobile industry in Europe, representing manufacturers of passenger cars, vans, trucks and buses with production sites in the EU. Among many other activities ACEA defines specifications for engine oils so called ACEA Oil Sequences. The sequences are usually updated every few years to include the latest developments in engine and lubricant technology. The first ACEA oil sequences were introduced in 1996 when they replaced the former CCMC specifications. The following table defines the relevant dates for the ACEA sequences that were introduced so far: 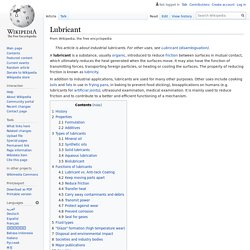 It may also have the function of transmitting forces, transporting foreign particles, or heating or cooling the surfaces. The property of reducing friction is known as lubricity. In addition to industrial applications, lubricants are used for many other purposes. Other uses include cooking (oils and fats in use in frying pans, in baking to prevent food sticking), bioapplications on humans (e.g. lubricants for artificial joints), ultrasound examination, medical examination.

History[edit] Lubricants have been in some use for thousands of years. Properties[edit] A good lubricant generally possesses the following characteristics: Lubricants (Engine oil) – Shell Support. 4 Types of Lubricants and How to Use Them. Is your robot grinding to a halt? 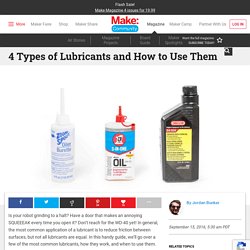 Have a door that makes an annoying SQUEEEAK every time you open it? Don’t reach for the WD-40 yet! In general, the most common application of a lubricant is to reduce friction between surfaces, but not all lubricants are equal. In this handy guide, we’ll go over a few of the most common lubricants, how they work, and when to use them. Photography by Hep Svadja Oils Read articles from the magazine right here on Make:.

Oils are thin liquids made of long polymer chains, with additives for various extra properties. Uses: Hinges, bearings, tool maintenance, sharpening blades Types: Motor oil, 3-in-1 oil, sewing machine oil, bar and chain oil Use When: • You want to lubricate something without the resistance inherent in using grease • You need lubrication to wick into a small space, without having to take anything apart Greases Greases are made by using oil (typically mineral oil) and mixing it with thickeners (such as lithium-based soaps). Heavy-duty grease. Tribology Index Page.