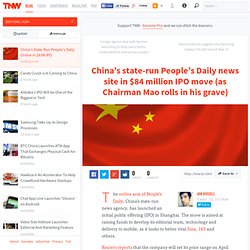 The move is aimed at raising funds to develop its editorial team, technology and delivery to mobile, as it looks to better rival Sina, 163 and others. Reuters reports that the company will set its price range on April 17 with final pricing expected to be revealed April 20. The news agency is aiming to raise as much as $83.6 million (527 million yuan) by selling 69 million shares. Update [17/04/12]: Reuters reports that the exchange filing states the IPO will raise $245.45 million (1.55 billion yuan), that’s three times higher than the original estimate. Dropbox warns “illegitimate” users against nabbing HTC storage, but will it be able to spot them? File sharing giant Dropbox has warned that users who try to scam its partnership with HTC for 23GB of free mobile storage will be detected and have their accounts closed. 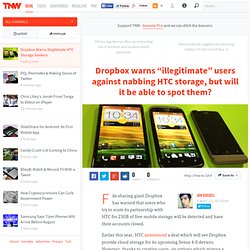 Earlier this year, HTC announced a deal which will see Dropbox provide cloud storage for its upcoming Sense 4.0 devices. However, thanks to creative users, an options which mimics a Sense 4.0 device has surfaced, purporting to provide the free storage to unsupported phones. As Electronista notes – via Phandroid– , the access schemes were originally posted to a developer forum in March, and contained details of an APK app that, it was claimed, could grant access to the storage for users of “almost any smartphone”. Dropbox is on to the issue and it issued an advisory note explaining that users who access the storage using the illegitimate method, will have their storage removed: The official Dropbox 23GB HTC promotion will not start until sometime early this month, when the devices are released. FedEx Launches Ship to Friends Facebook App. 8 November '12, 09:15pm Follow Because “friendship goes beyond digital,” FedEx has decided to launch Ship to Friends, an app which lets US-based users prepare and pay for a shipment without ever leaving Facebook. 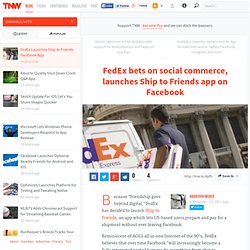 Annoyed Americans Plan Aussie Invasion. 9 November '12, 01:35am Follow Yes yes, this is a bit gloating in that the people we are mocking are silly, but that’s really quite alright as we’re better than them. 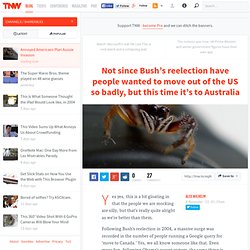 Apple supplier’s 60-hour week compliance rate down from 97% to 88% in Sept. due to ‘peak’ production. Apple has updated its Labor and Human Rights page to detailing its efforts to curtail excessive work weeks in its suppliers factories, like Foxconn in China. 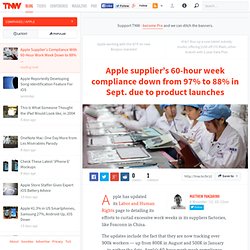 The updates include the fact that they are now tracking over 900k workers — up from 800K in August and 500K in January — to gather the data. Apple’s 60-hour work week compliance rate was down nearly 10% from August’s high of 97% to 88% in September. Apple requires that workers never work more than 60 hours in a week, which is in line with Chinese labor law.

However, a new note has been added to the page text that seeks to explain the drop: Australia's Mandatory Internet Filter Has Finally Been Killed. Today, the Australian Federal Government has announced that it will no longer pursue the Cleanfeed, a mandatory ISP filtering program riddled with problems and ethical concerns. 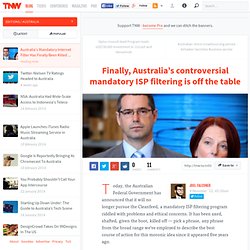 It has been axed, shafted, given the boot, killed off — pick a phrase, any phrase from the broad range we’ve employed to describe the best course of action for this moronic idea since it appeared five years ago. The filter’s best friend, Senator Stephen Conroy, issued a statement to this effect today. The Minister for Broadband and Communications often provides us with fodder that would be far more hilarious if he wasn’t the Minister for Broadband and Communications, such as this 2010 gem: “There’s a staggering number of Australians being in having their computers infected at the moment, up to 20,000… uh… can regularly be getting infected by these spams or scams, that come through the portal.” The news that the initiative has been cancelled is just part of the story.

Image Credit: Paul Kane/Getty Images. Bankiwi offers a fresh way for UK kids to manage their money. As we saw at a recent SeedCamp event, the financial sector is ripe for disruption. 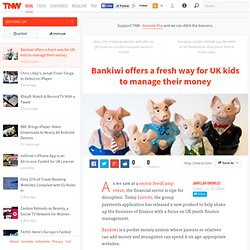 Today Leetchi, the group payments application has released a new product to help shake up the business of finance with a focus on UK youth finance management. Bankiwi is a pocket money system where parents or relatives can add money and youngsters can spend it on age-appropriate websites. American Idol Is Now Shazam-Enabled. American Idol episodes are now Shazam-enabled, the music recognition startup announced today. 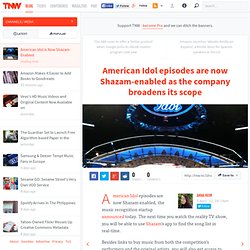 The next time you watch the reality TV show, you will be able to use Shazam‘s app to find the song list in real-time. Besides links to buy music from both the competition’s performers and the original artists, you will also get access to dedicated Twitter feeds and additional information about the hit Fox show, on time for its grand finale on May 22 and 23. This announcement and the company’s recent focus on big live TV events confirms Shazam’s potential as a competitor to second-screen apps such as GetGlue and Miso. As a matter of fact, it is interesting to note that the company doesn’t describe itself as a music recognition startup, using the much broader expression “media discovery company.”

More generally, its ambition is to be ”the best way for people to discover, explore, buy, and share, music, TV shows and branded content.” Silicon Graphics' Patent Troll Remnant Sues Google, Amazon. Graphics Properties Holdings, the sad remnant of the once-mighty Silicon Graphics (SGI), is back with more patent lawsuits.

This time, it’s targeting a host of tablet computer and e-book reader manufacturers, including Amazon, Google, Barnes & Noble, HP, Dell, Lenovo, ZTE and Huawei. The 16 Startups Vying for Glory at the LeWeb 2012. 7 November '12, 02:56pm Follow Huge conference LeWeb is a firm fixture on the European tech events calendar, pulling in attendees from across the world to meet, network, do business and socialize in Paris each December. 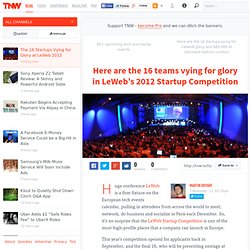 Pins Can Now be Board Covers on Pinterest. Pinterest. Love it or hate it, the site draws a ridiculous amount of traffic and it’s taken off in a huge way. There have been some bumps in the road, and the company is trying to address those. Today, in a blog post, Pinterest details how users will now be able to select a single image to represent each of their boards. So now, as you’re browsing around in your own boards, or even on the boards of someone else, you can set a specific pin to be your board cover of choice. The Question Apple Needs to Answer Before it Releases an iPad Mini.

Recent rumors of Apple releasing a 7.85″ iPad have been compounded by Daring Fireball’s John Gruber, stating yesterday that he knew Apple had a working prototype of such a device in its labs. We found this to be relatively unsurprising, but it does raise some interesting questions about when we might see it hit the market. There have been a couple of good pieces on the iPad ‘mini’ recently. Wikipedia Updates Apps, Ditches Google Maps. To say that mobile has been a huge boost for Wikipedia would be an understatement according to a post from the site today, saying that its 2-month-old Android version alone has accounted for 23M page views per month, with 2.25M installs to date.

Today, the Wikimedia Foundation has released updates for both iOS and Android versions and the features are jampacked. The glaring new feature is the fact that Wikipedia has opted to ditch Google Maps in favor of OpenStreetMaps for its popular “nearby view” feature. This is a growing trend for companies, as we’ve seen both Apple and foursquare opt for the open source alternative as well. The reason behind the move has to do with support for as many devices as possible:

Pocket Launches A Brand New SDK. COMMON's Latest Event is Searching For American Innovators. Instagram wrote its own push notification server for Android, and it’s open-sourcing it. Amazing: Microsoft turns spoken English into spoken Mandarin - in the same voice. 8 November '12, 08:19pm Follow Microsoft has today posted a video, and complementary explanation of language translation that goes far past what we thought was currently possible.

Etsy Launches Hacker Grants: Supporting Women in Technology. Last September 2011, 3 out of 96 employees in Engineering and Operations at Etsy were women, and none of them were managers. Considering the company’s majority-female user base — Etsy supports the businesses of hundreds of thousands of female entrepreneurs, which sell a majority of all items to women — the team at Etsy decided to change the ratio.

Getting started. 15 Quirky Gadgets and Accessories to Buy Today (May) It’s time for us to take another look at a bunch of quirky, imaginative and downright useful gadgets and accessories that you can buy today. Which one takes your fancy the most? Half-Life 2 and Portal 2 Arrive on the Nvidia Shield. The White List Tracks Investors Following Startups. Twitter Introduces Mute Feature on Android, iPhone, and Web. Google Launches Glass Open Beta in the US. Yahoo Acquires Ephemeral Messaging App Blink. Nintendo Takes Down iOS Game Boy Emulator GBA4iOS. WeChat Messaging App Climbs to 396 Million Monthly Active Users. All channels Load More Support TNW - become Pro and we can ditch the banners. Loop brings its contactless mobile payments to Android. BreakFree for Android Reveals Your Smartphone Addiction Levels.

Gmail for Android Passes 1 Billion Installations. Google executive Sundar Pichai revealed today that the company’s Gmail app for Android has passed the 1 billion download mark. The app’s Google Play listing actually ticked over to the 1 billion+ range a couple days ago, but we’ll take Pichai’s official pronouncement as the final word. Gmail is the first app to cross the milestone if you don’t count the background Google Play services app. What It's Like to Use Google Glass Apps: TripIt, Foursquare, OpenTable. Yahoo Movies Relaunches as a Digital Magazine. Foursquare Launches Swarm Check-in App for iOS and Android. Politician & Paedophile Ask Google 'to be Forgotten' Google 'a Million Miles Away' From What Larry Page Dreams of. Google Updates Nik Analog Effects Photo Plug-in. Evernote for Windows Gets a Presentation Mode. Exploring the aesthetics of food photography with Instagram star Patrick Janelle. Google Maps Gets UK Transport Data Boost.

Facebook Has A 'Rapidly Growing' Business In China. Secrets to Success with Email Autoresponders. Dropbox Patches Shared Link Vulnerability. DrawQuest Closes Down After Security Breach. 7 Reasons Why Your Startup Will Fail (And How to Soften the Blow) Google Docs Now Lets You Crop, Rotate, Add Borders to Images.