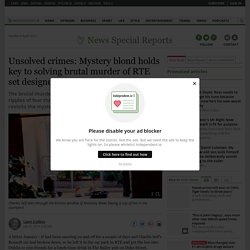 At about 2.45pm Charlie tossed back a last Black Bush, turned to his friend Bill Maher and said he'd better get back to RTE, where he worked as a set designer and was due to have a meeting with his boss Alan Pleass. They left The Bailey together and walking up Dawson Street making vague plans to meet later that evening. After work, Self went home and lit the fire before deciding to head back into town. He was picked up while waiting forlornly at a bus stop on the Monkstown Road at around 8.30pm by a sympathetic motorist who dropped him near O'Connell Bridge. He had a few drinks in The Bailey before proceeding to the South William pub and then on to Bartley Dunne's pub in Stephen Street Lower, which was known as a "last port of call" for a man looking for male company. 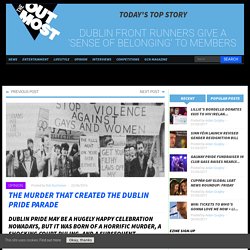 Were he living in Dublin today, you might see him as just another good-looking gay lad smiling in a selfie on Facebook or maybe bopping on the dancefloor of The George with his mates of a Saturday night. But Declan, and countless others like him, lies cold in the grave now, his life brutally snuffed out by hatred and ignorance on a cold September night in Fairview Park in 1982. Dublin in the early ’80s was a grim place to be gay. Criminalisation made it extremely difficult to learn about other LGBT people, let alone actually meet them. Conor O' Grady Fine Art: Series Of Gay Murders Dublin Circa 1980s. Charles Self: stabbed to death on the 20th january 1982 in his home in dublin.gardai were given a description and an artist sketch of the man they believed to be inviolved.however they interrogated nearly 1500 men, few of which matched the description provided by witnesses.gardai questioning centered around private lives of the men being questioned rather than the murder its selfin fact gardai employed rather unorthodox techniques in order to gather infomation.including black mailing closeted gay men, for information about the gay under world which existed around the streets and parks of dublin.no one was ever convicted for the murder of charles self. 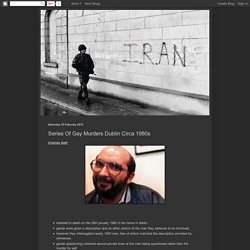 Declan Flynn: (images of the first gay pride, ireland 1980) g (gay pride today in dublin) Charlie Self and Vincent Hanley. Charlie Self | Public domain | 14232 Charles (Charlie) Self, a well-known figure in the Irish gay community, was murdered in his flat in Dublin, Ireland in 1982. 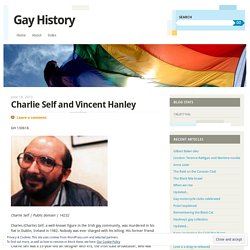 Nobody was ever charged with his killing. His former friend and house mate Vincent Hanley was a video and radio disc jockey who died in 1987. Garda homophobia played a part in the failure to solve case. The case of Charlie Self, a 33-year-old set designer with RTE, who was brutally murdered at his south Dublin home on January 21, 1982, is currently one of more than 100 "cold cases" being reviewed by the Garda Serious Crime Review Team. 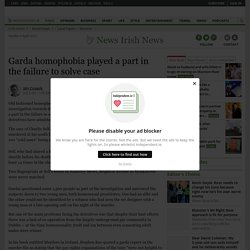 Self, who had shared a house with the then high-profile RTE DJ Vincent Hanley until shortly before his death, was the victim of a vicious knife attack. He was stabbed at least 14 times in the chest and the blade penetrated right through his back six times. Two fingerprints at Self's house in Annesley Mews, Brighton Avenue in Monkstown were never matched. Gardai questioned some 1,500 people as part of the investigation and narrowed the suspects down to two young men, both homosexual prostitutes. One had an alibi and the other could not be identified by a witness who had seen the set designer with a young man at a late-opening café on the night of the murder. 'A brutal and frenzied attack': New appeal into 1982 murder of Late Late Show set designer.

Dublin: The Fairview Park Murders and the Declan Flynn murder case. Gh140629 Fairview Park Protest March photographed on Amiens Street, Dublin by Derek Speirs, courtesy “Out For Ourselves” (Womens Community Press, 1986) | Irish Queer Archives/Come here to me | 14074 In 1982 during the summer a series of systematic beatings was carried out in Fairview Park, Dublin. 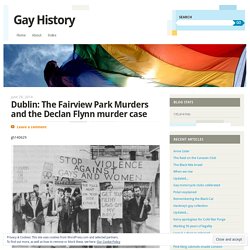 Gay men used the park as a meeting place and for cruising. On September 10, the gang attacked 31-year-old Aer Rianta worker Declan Flynn. One of the gang was used as ‘bait’ and when Flynn sat down next to him on the bench, the other four rushed out from behind trees. Folklore from the Dancefloor Part 1. Nightclubs – Brand New Retro. Skip to content Dublin Discomania 1978 – Magill Magazine Guide to Dublin Action Spots 1972 Ministry (of Sound) – Weekend in Dublin 1998 5 Dublin Disco Adverts – 1977 And Another 10 Irish Rave Girls from 1970. 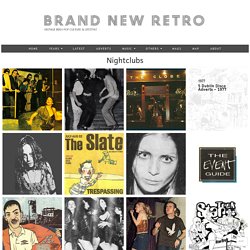 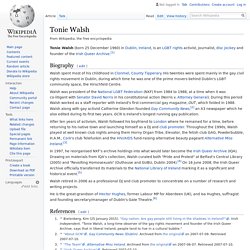 His twenties were spent mainly in the gay civil rights movement in Dublin, during which time he was one of the prime movers behind Dublin's LGBT community space, the Hirschfeld Centre. Beaten, robbed and left to die: One march that paved the way for the Dublin Pride parade. 'Attitudes may have changed but gay-bashing still happens' On September 10, the gang struck again. 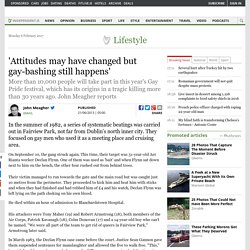 This time, their target was 31-year-old Aer Rianta worker Declan Flynn. One of them was used as 'bait' and when Flynn sat down next to him on the bench, the other four rushed out from behind trees. Their victim managed to run towards the gate and the main road but was caught just 10 metres from the perimeter. Reactionary murders in Ireland. There have been a small but not insignificant number of reactionary murders in Dublin and on the island of Ireland since the 1920s. 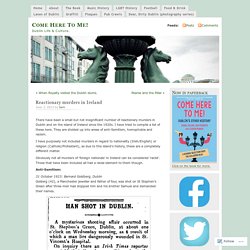 I have tried to compile a list of these here. They are divided up into areas of anti-Semitism, homophobia and racism. I have purposely not included murders in regard to nationality (Irish/English) or religion (Catholic/Protestant), as due to this island’s history, these are a completely different matter. Obviously not all murders of ‘foreign nationals’ in Ireland can be considered ‘racist’. Those that have been included all had a racial element to them though. Anti-Semitism: 31 October 1923: Bernard Goldberg, Dublin Golderg (42), a Manchester jeweller and father of four, was shot on St Stephen’s Green after three men had stopped him and his brother Samuel and demanded their names. The Weekly Irish Times, 3 November 1923. Sexuality: 3 June 1979: Anthony McCleave, Belfast McLeave was murdered in one of the city’s best known ‘cruising areas’.

Race: Declan Flynn - Wikipedia. Declan Flynn was an Irish gay man attacked and killed in Fairview Park in Dublin on 9 September 1982. 27 Podcasts You Should Listen To In 2017. These DJs Saved Lives. Did Anyone Notice Us? (RTE 2003) 151 IQA. How Dublin Became a Hotspot for Hard Hitting Techno. Photo by Riccardo Lancia Irish lads Sunil Sharpe and DeFeKT are killing it right now. Whether individually or in their fearsomely intense collaborative project Tinfoil (whose third EP has just been released), the Dublin-based DJ-producers are at the forefront of a booming Irish techno scene that also features leading lights like Lakker, Kenny Hanlon, TR-One and Automatic Tasty —all of whom will be joining them on the bill at Bloc Weekend in March.

Alongside Steve Davis, obviously. ‘An alternative community center’: the role of nightclubs in the LGBT community. The attack on the Pulse nightclub in Orlando has devastated the LGBT community in the US and abroad. It also directly targeted the idea of gay clubs being safe spaces for LGBT people. On today’s edition of Off Topic, we discuss the role nightclubs play, how they act as community centres for LGBT people, and how crucial they are for a section of our society that is still on the receiving end of everyday abuse. Gay community recalls dark days before decriminalisation. It was well after midnight when Tonie Walsh was woken by the ringing phone. On the line was a panicked friend. He had been out in Dublin and decided to continue the night by taking a male companion back to a city centre hotel. The receptionist was suspicious and after booking the two men into a room, alerted gardaí who arrived and caught them together.

It was 1986 and homosexual acts would not be legal for another seven years. National LGBT Federation. Rice’s and Bartley Dunne’s: Dublin’s first gay-friendly bars. Introduction As for most of us, being gay in those days was a very lonely experience. There weren’t many opportunities to meet gay people, unless you knew of the one bar – two bars, actually, in Dublin at that time, Bartley Dunne’s and Rice’s … They were the two pubs and if you hadn’t met gay people, you wouldn’t have known about these pubs; there was no advertising in those days, and it was all through word-of mouth.

Hotel Bereford and the Seafarer’s Club. 3 Beresford Place, behind the Custom House on Dublin’s Northside, boasts an interesting history. As a hotel from the 1930s to the mid 1940s, it was a popular meeting place for gay men in the capital. This predated 1950s and 1960s gay-friendly pubs, Rice’s and Bartley Dunne’s, and was several decades ahead of gay community centres, the Hirschfeld (1979) and pubs, The George (1985). For the last seventy years, the premises has been managed by the St. Vincent de Paul (SVP) to provide a “friendly location for visiting seamen.”

The always informative Archiseek website tells us that Beresford Place: …is a short curving terrace of five houses built on an axis with the central dome of the Custom House. Beresford Place in 1967. A conversation with Philip Chevron. Reactionary murders in Ireland. The Viking on Dame Street, Dublin’s first gay bar? Pride in numbers. Life was a drag in 1970s Dublin: Before Panti, there was Mr. Pussy.