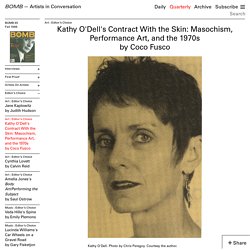 Photo by Chris Peregoy. Courtesy the author. The fact that many contemporary artists are returning to performance-video as well as video and film installations is testimony to the lasting impact of earlier, albeit ephemeral, works. Kathy O’Dell’s study, Contract With the Skin, focuses on a handful of now-legendary body-art pieces from the early ’70s that were tinged with violence against the self. In her astute analysis, O’Dell untangles the social, psychological, and legal implications of such infamous creative acts as Chris Burden shooting himself, Vito Acconci biting his arm and filling the teeth marks with ink, Gina Payne slitting her lip with a razor blade, and Ulay sewing his mouth shut while Marina Abramovic attempted to articulate his thoughts. That these acts were excruciatingly painful to engage in as well as to witness goes without saying. Contract with the Skin: Masochism, Performance Art, and the 1970s on JSTOR. SRG brutal silences 2011 reducedsize.

Marina Abramovic: the latest target in the rightwing culture wars. The 2016 US election has brought the nation’s rifts to a point of blood-curdling, irreconcilable vitriol surely unseen since the civil war. 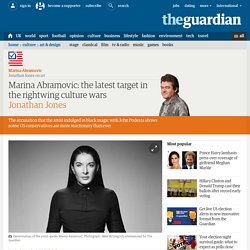 Amid such mayhem, an accusation that artist Marina Abramović has been schooling senior Democrats in black magic is almost a welcome bit of light relief. How did avant-garde art star Abramović get involved in America’s most corrosive election season? Performance Art Movement, Artists and Major Works. "The line between art and life should be kept as fluid, and perhaps indistinct, as possible. 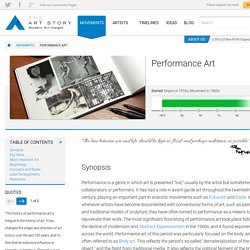 " Synopsis Performance is a genre in which art is presented "live," usually by the artist but sometimes with collaborators or performers. It has had a role in avant-garde art throughout the twentieth century, playing an important part in anarchic movements such as Futurism and Dada. Futurism Movement, Artists and Major Works. Synopsis The most important Italian avant-garde art movement of the 20th century, Futurism celebrated advanced technology and urban modernity. 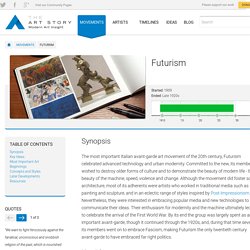 Committed to the new, its members wished to destroy older forms of culture and to demonstrate the beauty of modern life - the beauty of the machine, speed, violence and change. Although the movement did foster some architecture, most of its adherents were artists who worked in traditional media such as painting and sculpture, and in an eclectic range of styles inspired by Post-Impressionism. Nevertheless, they were interested in embracing popular media and new technologies to communicate their ideas. 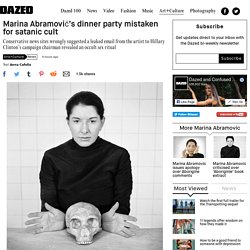 The email between the artist and Tony Podesta, which were forwarded to his brother John Podesta, Clinton’s campaign chairperson, read: “I am so looking forward to the Spirit Cooking dinner at my place. Do you think you will be able to let me know if your brother is joining?” The invitation from Abramović was extended to Tony Podesta, who is a collector of her work, and his brother, as part of a dinner party for big donors to her campaign. The event was only given a “funny name” for an otherwise “normal dinner”, according to Abramović. 10 guests were included, though John Podesta was not present. Abramović told Artnews: “I’m outraged, because this is taken completely out of my context,” she said. IEEE Xplore Search Results. Body of Art: Meet performance artist Marina Abramovic. An Art Made of Trust, Vulnerability and Connection. Log In. Worthies all. 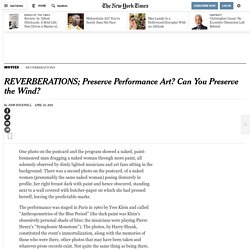 Why, then, when I first got the postcard and before I even realized who would be pondering these issues, did the whole conceit strike me as hilarious? The answer was the very seriousness with which these experts concerned themselves with an apparent paradox: conserving and collecting art that was intended to be transitory and uncollectible. Their seriousness speaks, I think, to the inherently more conservative tenor of our times (whatever the political views of the panelists may be) and to the natural desire of artists as they age to feel that they should leave some sort of mark on posterity. Marina Abramovic: An Interview. Log In. Arranging for disappearance isn’t easy in an age of omnipresent recording devices, which explains why the first thing you see at the Guggenheim is a sign forbidding the taking of photographs. 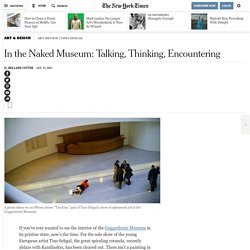 This is standard Sehgal practice. But unless you know why, the prohibition comes across as calculatedly tantalizing. His rule may be unenforceable in this day and age. Still, it turns the museum into a zone of sort-of secrecy. Khanacademy. 23. Triadic Ballet - The 25 Best Performance Art Pieces of All Time. Performance art. Introduction to performance art Performance art is sometimes carefully planned and scripted but can also be spontaneous and random. 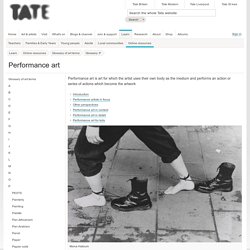 Although it often takes place in front of an audience and may involve audience participation – or the orchestration of other participants by the artist – it can also be an action performed privately by the artist.