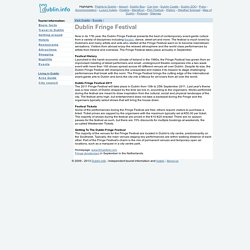 The festival is much loved by Dubliners and many artists and acts who started at the Fringe Festival went on to become mainstream sensations. Visitors from abroad enjoy the relaxed atmosphere and the world class performances by artists from Ireland and overseas. The Fringe Festival takes place annually in September. Festival History Launched in the harsh economic climate of Ireland in the 1980s, the Fringe Festival has grown from an improvised meeting of street performers and small, underground theatre companies into a two week event with more than 100 shows spread across 40 different venues all over Dublin. 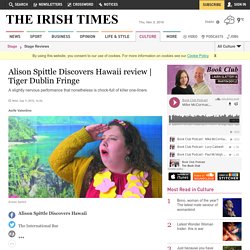 Asks Alison Spittle. “Liars,” she says, when no hands are raised. She’s dressed in a hula skirt, surrounded by inflatable palm trees, sharks and children’s lilos, and we’re all wearing garlands. Kris Nelson: Mixer of Art and Tech on the Fringe. Culture Bites, sponsored by CurrencyFair A global movement to embrace the Arts in STEM sectors (Science Technology Engineering Math) permeates education and technology fields nowadays. 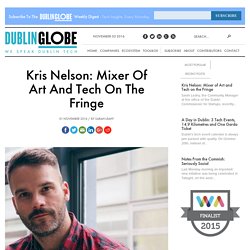 From initiatives to include art and design classes in science degrees to a general drive to influence tech ecosystems with an artistic perspective, the two worlds are increasingly colliding. The recent appointment of the former CEO of the Abbey Theater, Fiach Mac Conghail, as CEO of The Digital Hub is an example of that right here in Dublin. Sarah Leahy, the Community Manager at the office of the Dublin Commissioner for Startups, recently caught up with Kris Nelson, Artistic Director of the Fringe Festival to talk about the convergence of art and tech, the recent and very successful Fringe Festival and his observations on the art scene in Dublin. Congratulations on an amazing Fringe Festival! Eight out of 10 online adults in Ireland use social networks –survey findings. Social Media Statistics for Ireland - Q1 2016. Digital Training Institute. 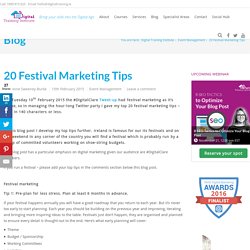 In this blog post I develop my top tips further. Ireland is famous for our its festivals and on any weekend in any corner of the country you will find a festival which is probably run by a group of committed volunteers working on shoe-string budgets. This blog post has a particular emphasis on digital marketing given our audience are #DigitalClare members. If you run a festival – please add your top tips in the comments section below this blog post. Tip 1: Pre-plan for less stress. How Róise Goan grew the Fringe. Late last week, a sizeable portion of the Irish arts community gathered in a brand new Dublin bar, and tried to keep quiet. 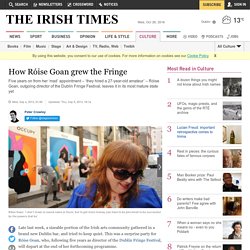 This was a surprise party for Róise Goan, who, following five years as director of the Dublin Fringe Festival, will depart at the end of her forthcoming programme. Most people in attendance, many of whom have emerged as leading artists in their field during her tenure, felt they owed her something. When Goan finally arrived – “surprise!” – she seemed genuinely overwhelmed – so it took a while to realise she had arrived bearing presents for her co-workers. Naive she is not. Goan was appointed to the role at the age of 27. By any reading of the Fringe’s next five years, though, Goan was the right person at the right time. If the landscape of Irish arts is distinctly different from even five years ago, the Fringe has helped shape our most imaginative responses to crisis.

‘What’s new and what’s next?’ Is keeping on top of the new and the next exhausting, I wonder? Tiger Dublin Fringe celebrates a record-breaking edition! October 18, 2016by Fringe 2016 marked a record breaking year for Tiger Dublin Fringe as it celebrated a bumper edition this September. 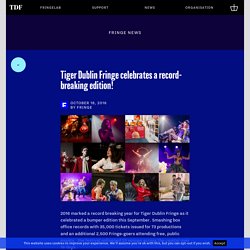 Smashing box office records with 35,000 tickets issued for 73 productions and an additional 2,500 Fringe-goers attending free, public events, the festival enlivened 23 venues across the capital over 16 days. Sell-out show RIOT caused more than a stir as audiences flocked to Merrion Square to catch THISISPOPBABY as they became the first ever Irish artists to anchor the Spiegeltent with their unbelievable RIOT. Hollywood star Mel Gibson was lucky enough to join Dublin audiences at the hottest ticket in town and witness the glittering theatrical roulette featuring Panti’s wicked humour, Emmet Kirwan’s clarion commentary, Lords of Strut’s devilish antics and breathtaking moves from Up & Over It. Tiger Dublin Fringe 2016 brochure by Dublin Fringe Festival. Tiger Dublin Fringe – DeVos Programme Learning. Tiger Dublin Fringe: Riot Review. Tiger Dublin Fringe 2016 Dates: Sep 21 - 25 @ 19:00 Tickets: €23 - €26 Duration: 90 mins Venue: Spiegeltent @ Merrion Square RIOT has easily been the most talked about show in the run up to the Tiger Dublin Fringe Festival and given that it is marking ten years of success for This Is Pop Baby a lot was expected from it. 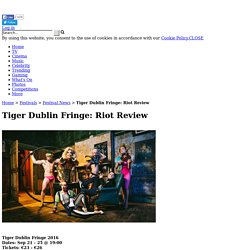 Thankfully, it delivers in spades. Panti Bliss is on hand from the beginning to give us a run through of what we can expect during the proceeding ninety minutes but honestly nothing can prepare you for the variety of theatre, comedy, drag, music and social commentary that's on offer. The Queen of Ireland takes up the position of MC for the evening and although being slightly marginalised due to a foot injury still manages to put in the kind of side splitting performance we've come to expect from her. Emmet Kirwan, fresh from rave reviews for Dublin Old School certainly isn't resting on his laurels. Kirwan may be the highlight, but there isn't a bum note in the entire show. This Is How We Fly – Spiegeltent – Tiger Dublin Fringe Review – No More Workhorse. Dance This Is How We Fly – Spiegeltent – Tiger Dublin Fringe Review Date Sep 18 @ 19:00 / Site opens 18:00 – Tickets €18 Duration 90 mins – Venue: Spiegeltent @ Merrion Square. 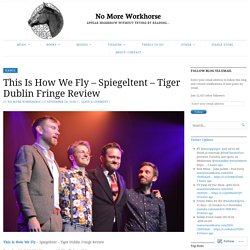 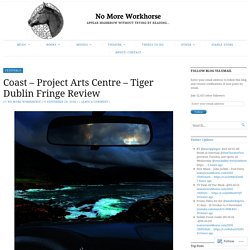 Duration 80 mins, Venue: Project Arts Centre Cube Written and directed by Tracy Martin, Coast in the Project’s Cube Theatre, packs as much theatrical punch into its 80-minute running time as many full-length productions that many of us will have sat through in mainstream theatres. Ciara Murnane’s set design is a model of economy. A few concrete-coloured boxes with black scumbling instantly evoke shoreline. Monday: Watch Out for the Right! – Tiger Dublin Fringe Review – No More Workhorse.

Dance Monday: Watch Out for the Right! 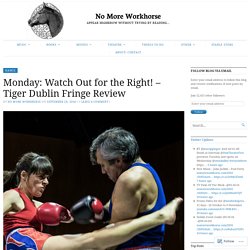 Festivals Riot – Spiegeltent – Tiger Dublin Fringe Review Dates Sep 16 – 17 @ 21:30 / Sep 17 & 20 – 25 @ 19:00 Site opens 18:00 – Tickets €23 – €26 Duration 90 mins – Venue: Spiegeltent @ Merrion Square There have been many cabaret acts in the Fringe Festival over the years, what makes this one unique is that it is very, very Irish. How Irish I hear you say? Well, one of the acrobats performs in a Roscommon GAA top while eating a packet of Tayto. This is a collection of performers put together by Thisispopbaby for a new show in the Fringe, running in the wonderful setting of the Spiegeltent in Merrion Square. Emmet Kirwan opens proceedings with a blistering state of the nation address in the form of a rap.

There’s an emphasis on the music of the 80s, with a heavy synth sound throughout. Directed by Phillip McMahon and Jennifer Jennings. Dublin Fringe reviews: “A brilliant show I never want to suffer through again” RELEASE THE BABOONS ★★★★ The New Theatre Full disclosure. In the opening minutes of Paul Currie’s Dadaist pep rally, I was singled out for insufficiently vigorous audience participation, for resting my chin on my hand and (fair cop, this) for being a potential reviewer. Ever wary of the attention swinging back in my direction - which it did repeatedly - I went on to endure the most excruciating 60 minutes I have ever experienced in a public place. Oh well. “It’s not for everyone,” Currie, a tall northerner with many yards of beard, twice whispered in a voice plausibly flavoured with despair. For those prepared to be “good sports”, Release the Baboons will feel like a work of collaborative genius (with you as one of the collaborators).

Driven by rebellious passion, Kirwan’s flow is dazzling (when he rhymes, you don’t draw breath), supplying both the wattage and conscience to Phillip McMahon and Jenny Jennings’s meticulously composed cabaret. It would be sacrilege to say Panti, our MC, plays second fiddle; but slowed by an orthopaedic cast, it turns out she can put a foot wrong. Elsewhere, acts weave and clash as rivetingly as Alma Kelliher’s live music: Ronan Brady’s suggestive acrobatics over a Michael Harding monologue (it works!) Hostel 16 3 Stars Smock Alley Theatre “What is this word?