Courthouse News Service. CALL FOR RESEARCH. CALL FOR RESEARCH - September 16 2000 -version 11/02/00 TITLE: Global Manufacturing and Taylorism Practices of Nike Corporation and its Subcontractors A proposal to coordinate joint university researcher study groups, sponsored by International Academy of Business Disciplines, and to be submitted to Nike Corporation,The Association for Accountancy and Business Affairs, Academy of Management, Administrative Sciences Association of Canada, International Association for Business,Society for Business Ethics, and the American Accounting Association,French association "De l'Ethique sur l'Etiquette,"German Industrial Relations Association (GIRA),International Industrial Relations Association (IIRA), Pacific Sociological Association NOTE: This proposal is the sole work of the author (with 42 study group members' input) and is not endorsed by any journal, association, university, or any other institution. 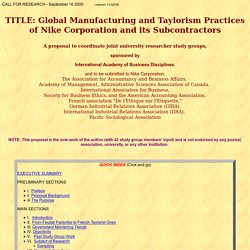 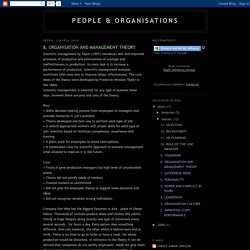 Its main task is to increase a performance of production. Scientific management analyzes workflows with main aim to improve labour effectiveness. The core ideas of the theory were developed by Frederick Winslow Taylor in the 1880s.Scientific management is essential for any type of business these days, however there are pros and cons of the theory. Pros:• Shifts decision making process from employees to managers and provides hierarchy in job’s positions• Theory developed one best way to perform each type of job• It selects appropriate workers with proper skills for each type of job, selection based on technical competence, experience and training• It plans work for employees to avoid interruptions• It established rules for scientific approach to business management what allowed to improve it in the future. 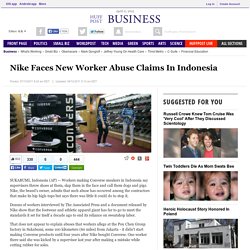 Nike, the brand's owner, admits that such abuse has occurred among the contractors that make its hip high-tops but says there was little it could do to stop it. Dozens of workers interviewed by The Associated Press and a document released by Nike show that the footwear and athletic apparel giant has far to go to meet the standards it set for itself a decade ago to end its reliance on sweatshop labor. That does not appear to explain abuses that workers allege at the Pou Chen Group factory in Sukabumi, some 100 kilometers (60 miles) from Jakarta - it didn't start making Converse products until four years after Nike bought Converse. One worker there said she was kicked by a supervisor last year after making a mistake while cutting rubber for soles. 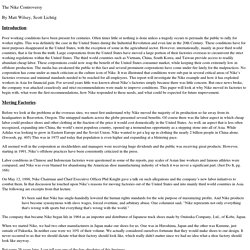 Often times little or nothing is done unless a tragedy occurs to persuade the public to rally for worker rights. This was definitely the case in the United States during the Industrial Revolution and even late in the 20th Century. How Nike solved its sweatshop problem. 5 Business Lessons from FC Barcelona. FC Barcelona’s success both on and off the field speaks for itself. 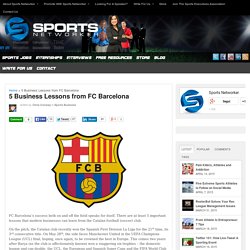 There are at least 5 important lessons that modern businesses can learn from the Catalan football (soccer) club. On the pitch, the Catalan club recently won the Spanish First Division La Liga for the 21st time, its 3rd consecutive title. On May 28th, the side faces Manchester United in the UEFA Champions League (UCL) final, hoping, once again, to be crowned the best in Europe. This comes two years after Barça (as the club is affectionately known) won a staggering six trophies – the domestic league and cup double, the UCL, the European and Spanish Super Cups and the FIFA World Club Cup. Off the field, Barça is a well-oiled machine and ranks second (to Spanish rivals Real Madrid) in the Deloitte Football Money league 2011, which profiles the highest earning clubs. So, how has Barcelona achieved all this? 1. The club is soundly managed, innovative, responsible and accountable. Secondly, Barça learns from others. 2. 3. 4. 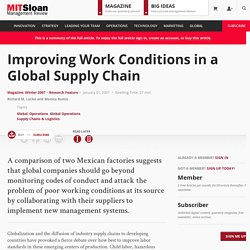