How anti-vaxxers have scared the media away from covering vaccine side effects. "It was the most startling side effect I've ever come across. 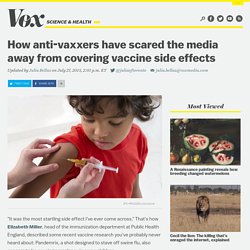 " That's how Elizabeth Miller, head of the immunization department at Public Health England, described some recent vaccine research you've probably never heard about: Pandemrix, a shot designed to stave off swine flu, also appears to be causing narcolepsy in some children. Public health officials — especially ones that work in the politically fraught field of vaccine safety — don't typically make emotive statements like that. Then Miller told me about something that shocked her even more: The media didn't pick up on this story at all. In fact, she characterized the reception to her 2013 research about vaccines and narcolepsy as "radio silence. " I told Miller that I didn't find her news all that surprising, because I ignored the Pandemrix story, too. Vaccines are one of the single greatest contributors to public health of the past century. Vilifying Parents Who Don’t Vaccinate Their Kids Is Counterproductive. The views expressed are those of the author and are not necessarily those of Scientific American. 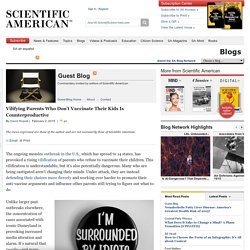 The ongoing measles outbreak in the U.S., which has spread to 14 states, has provoked a rising vilification of parents who refuse to vaccinate their children. This vilification is understandable, but it’s also potentially dangerous. Many who are being castigated aren’t changing their minds. Under attack, they are instead defending their choices more fiercely and working ever harder to promote their anti-vaccine arguments and influence other parents still trying to figure out what to do.

How to Get Silicon Valley's Anti-Vaxxers to Change Their Minds. Psychological Biases Play A Part In Vaccination Decisions : 13.7: Cosmos And Culture. With the recent outbreak of measles originating from Disneyland, there's been no shortage of speculation, accusation and recrimination concerning why some people won't vaccinate their children. 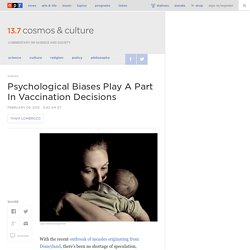 Neoliberal Mothering and Vaccine Refusal. By Jennifer A. 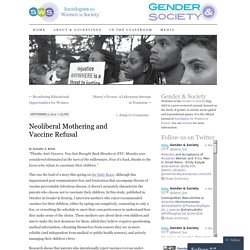 Reich “Thanks, Anti-Vaxxers. You Just Brought Back Measles in NYC. Measles was considered eliminated at the turn of the millennium. Now it’s back, thanks to the loons who refuse to vaccinate their children.” This was the lead of a story this spring on the Daily Beast. Should Anti-Vaxers Be Shamed or Persuaded? As the measles outbreak spreads to 18 states, anger against the anti-vaccine movement and individual parents who opt against immunizing their children is everywhere. 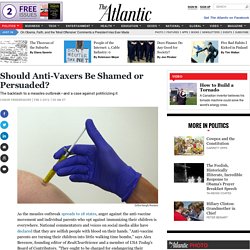 National commentators and voices on social media alike have declared that they are selfish people with blood on their hands. "Anti-vaccine parents are turning their children into little walking time bombs," says Alex Berezow, founding editor of RealClearScience and a member of USA Today's Board of Contributors. "They ought to be charged for endangering their children and others. " This backlash is understandable and parts of it are overdue. The ignorance and poor judgment of anti-vaccine parents put their own children and the general public at significantly increased risk of sometimes deadly diseases. But I part with the commentators who assume that insulting, shaming, and threatening anti-vaccination parents is the best course, especially when they extend their logic to politicians. Those remarks could be improved upon.

Disneyland_measles_anti_vax_beliefs_are_just_one_part_of_all_this. Right now, and sadly not for the first time in recent years, the United States is looking at an outbreak of a dangerous yet nearly entirely preventable disease. 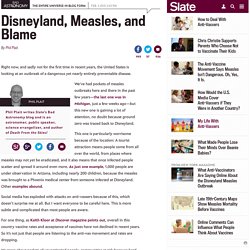 Phil Plait writes Slate’s Bad Astronomy blog and is an astronomer, public speaker, science evangelizer, and author of Death From the Skies! We’ve had pockets of measles outbreaks here and there in the past few years—the last one was in Michigan, just a few weeks ago—but this new one is gaining a lot of attention, no doubt because ground zero was traced back to Disneyland. This one is particularly worrisome because of the location: A tourist attraction means people come from all over the world, from places where measles may not yet be eradicated, and it also means that once infected people scatter and spread it around even more.

As just one example, 1,000 people are under observation in Arizona, including nearly 200 children, because the measles was brought to a Phoenix medical center from someone infected at Disneyland. How an Amish missionary caused 2014's massive measles outbreak. Last year was terrible for measles in the United States: there were 644 cases — the highest annual caseload in two decades. 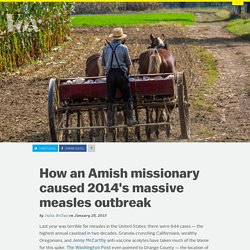 Granola-crunching Californians, wealthy Oregonians, and Jenny McCarthy anti-vaccine acolytes have taken much of the blame for this spike. The Washington Post even pointed to Orange County — the location of the current Disneyland outbreak — as "Ground Zero in our current epidemic of anti-vaccine hysteria. " But that's wrong. The real story behind the 2014 outbreak isn't on the West Coast. It's in Ohio Amish country, where a missionary returning from the Philippines turned an otherwise unremarkable year for this virus into one of the worst in recent history.

That's where Jacqueline Fletcher, the public health nursing director for Ohio's Knox County, got an harried call from a pay phone last April. A member of the local Amish community was on the line. Fletcher's first thought was, "Oh, shit. " The biggest myth about vaccine deniers: That they’re all a bunch of hippie liberals. Visitors follow Mickey Mouse for photos at Disneyland in Anaheim, Calif on Jan. 22. 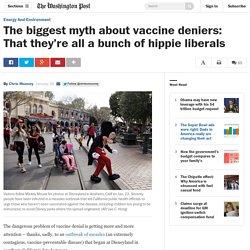 Seventy people have been infected in a measles outbreak that led California public health officials to urge those who haven’t been vaccinated against the disease, including children too young to be immunized, to avoid Disney parks where the spread originated. (AP/Jae C. Bill Maher: Vaccination: A Conversation Worth Having. While America is still in the grips of swine flu mania, let me use this opportunity to clear up a few things about my beliefs concerning the flu shot, vaccines, and health in general. 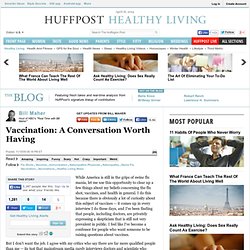 I do this because there is obviously a lot of curiosity about this subject of vaccines -- it comes up in every interview I do these days, and I've been finding that people, including doctors, are privately expressing a skepticism that is still not very prevalent in public. I feel like I've become a confessor for people who want someone to be raising questions about vaccines. But I don't want the job. I agree with my critics who say there are far more qualified people than me -- its just that mainstream media rarely interviews doctors and scientists who present an alternative point of view. There is a movement to stop people from asking any questions about vaccines -- they're a miracle, that's it, debate over. Vaccination is a nuanced subject, and I've never said all vaccines in all situations are bad. Ms. I'm No Anti-Vaxxer, But the Measles Vaccine Can't Prevent Outbreaks. The recent outbreaks of measles in Canada and the United States came as a shock to many public health experts but they wouldn't have to Dr. 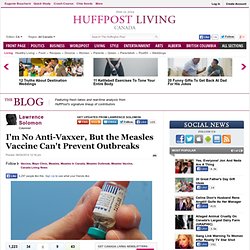 Gregory Poland, one of the world's most admired, most advanced thinkers in the field of vaccinology. The measles vaccine has failed, he explained two years ago in a prescient paper, "The re-emergence of measles in developed countries. " In that paper, he warned that due to factors that most haven't noticed, measles has come back to be a serious public health threat. Thankfully, in that paper and elsewhere he also spelled out in no-nonsense fashion what now needs to be done. Dr. And he sees the need for a major rethink, after concluding that the current measles vaccine is unlikely to ever live up to the job expected of it: "outbreaks are occurring even in highly developed countries where vaccine access, public health infrastructure, and health literacy are not significant issues.

Dr. People's failure to get vaccinated is deplorable, Dr.