The Naming of Hobbits. By Michael Adams It will be interesting to see how much of J.R.R. Tolkien ’s several invented languages will appear in Peter Jackson’s The Hobbit . In a letter to his American publisher, dated 30 June 1955, Tolkien suspected there were limits to how much invented language readers would ‘stomach’ — to use his term. The World of Tolkien's Hobbit. Since its first publication in 1937, J.R.R. 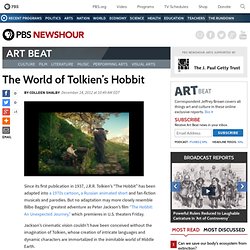 Tolkien’s “The Hobbit” has been adapted into a 1970s cartoon, a Russian animated short and fan-fiction musicals and parodies. But no adaptation may more closely resemble Bilbo Baggins’ greatest adventure as Peter Jackson’s film “The Hobbit: An Unexpected Journey,” which premieres in U.S. theaters Friday. Jackson’s cinematic vision couldn’t have been conceived without the imagination of Tolkien, whose creation of intricate languages and dynamic characters are immortalized in the inimitable world of Middle Earth.

Earlier this week, we talked to Jason Fisher, author of “Tolkien and the Study of his Sources,” about Tolkien’s ability to bridge mythology and language, and his constant revisions: Tolkien, who was a member of the Inklings at Oxford, studied Old and Middle English literature. How did language play into his creation of mythology? “The Hobbit” went through three editions from its first publishing. The Lord of the Rings Family Tree Project. Terry Pratchett: 'Fantasy is uni-age' Terry Pratchett's entourage has taken over a corner of the White Hart hotel in Salisbury, a long-standing haunt of the writer, who has a house just outside the town. 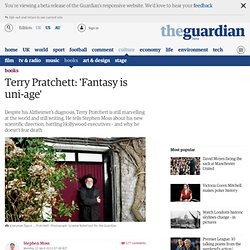 There's his PA, Rob Wilkins, whose role has become more demanding since Pratchett announced in 2007 that he had a rare form of early-onset Alzheimer's; a publicist; and Mr Boggis, a fan who describes himself as "PA to the PA". Mr Boggis is named after a character from Pratchett's Discworld series; he says he has read all 39 books.

Los Angeles Review of Books - To Understand The World Is To Be Destroyed By It: On H.P. Lovecraft. Why has Howard Phillips Lovecraft, the elitist, eccentric, racist New England writer of that specialized brand of fear literature known as “cosmic horror,” lasted and prospered where other, better writers have been forgotten. 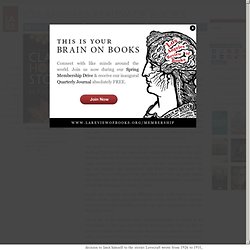 After all, Lovecraft was not the best of his era in any of the genres he wrote in. Clark Ashton Smith was a better stylist. Algernon Blackwood wrote better horror. Olaf Stapledon wrote better science fiction. Yet it is Lovecraft who has been canonized with a Library of America edition, who has provided the source material for academic writings, comic books, and even game shows like Jeopardy, and who has been assimilated by capitalist culture to the point that there are plushies made of his characters. Study: Reading novels makes us better thinkers. Are you uncomfortable with ambiguity? 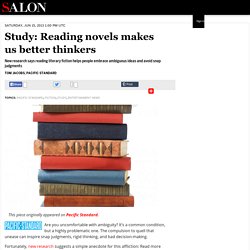 It’s a common condition, but a highly problematic one. The compulsion to quell that unease can inspire snap judgments, rigid thinking, and bad decision-making. Fortunately, new research suggests a simple anecdote for this affliction: Read more literary fiction. A trio of University of Toronto scholars, led by psychologist Maja Djikic, report that people who have just read a short story have less need for what psychologists call “cognitive closure.” Compared with peers who have just read an essay, they expressed more comfort with disorder and uncertainty—attitudes that allow for both sophisticated thinking and greater creativity. “Exposure to literature,” the researchers write in the Creativity Research Journal, “may offer a (way for people) to become more likely to open their minds.” Djikic and her colleagues describe an experiment featuring 100 University of Toronto students. Mangling A Myth, Ctd.

Mangling A Myth, Ctd. The Hidden Hobbit: 10 Secrets from Tolkien's Classic. Revisiting "The Hobbit" is like sifting through the deep piles of loot in a dragon's hoard: there's always something new to discover about J.R.R. 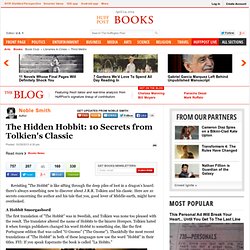 Tolkien and his classic. Here are 10 secrets concerning the author and his tale that you, good lover of Middle-earth, might have overlooked. A Hobbit Smorgasbord The first translation of "The Hobbit" was in Swedish, and Tolkien was none too pleased with the result. The translator altered the name of Hobbits to the bizarre Hompen. Tolkien hated it when foreign publishers changed his word Hobbit to something else, like the first Portuguese edition that was called "O Gnomo" ("The Gnome").

Smells Like Hobbit Spirit In Tolkien's posthumously published story "The Quest of Erebor," Gandalf states that he chose the plucky Bilbo to join Thorin's expedition to the Lonely Mountain for one very important reason: Smaug the dragon would not be able to identify the down-to-Middle-earth aroma of one of the Shire-folk. The Hunger Games Novel & Katniss Everdeen. 40,000 students worldwide are studying Lord of the Rings Online and you can too. Professor Jay Clayton of Vanderbilt University is chatting with me over Skype, but he admits that his attention is slightly divided. 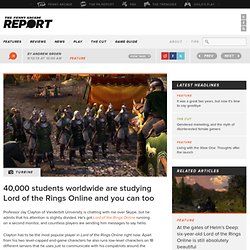 Big elf on campus. To Understand the World Is To Be Destroyed By It: On H.P. Lovecraft. H.P. Lovecraft as Source Code. Today is the birthday of one H.P. 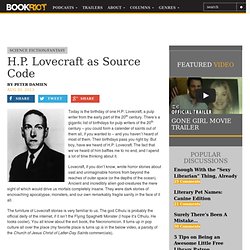