So You Want to Be A Marine Biologist: Deep Sea News Edition. If this comic makes you laugh, perhaps you should become a marine biologist. 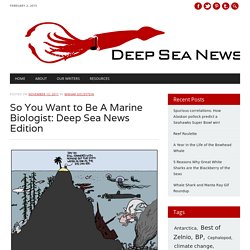 Note the lack of dolphins. Wanna Be a Marine Biologist? Here’s How. “Oh my God! 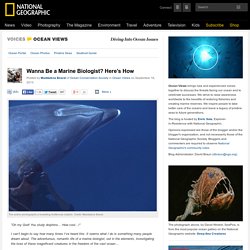 You study dolphins… How cool…!” I can’t begin to say how many times I’ve heard this. It seems what I do is something many people dream about. The adventurous, romantic life of a marine biologist, out in the elements, investigating the lives of these magnificent creatures in the freedom of the vast ocean…I am fortunate indeed, and I wouldn’t exchange my life and career for anything. But people don’t often realize what goes into the job. The number of emails, phone calls, and Facebook messages I receive has diminished a little in the last years, but they continue to come with regularity.

This Jay Is Evolving in a Very, Very Weird Way. The scrub jays of California’s Santa Cruz Island really love a good peanut. 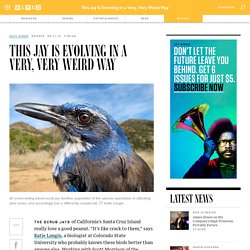 “It’s like crack to them,” says Katie Langin, a biologist at Colorado State University who probably knows these birds better than anyone else. Working with Scott Morrison of the Nature Conservancy, Langin started visiting the peaks and valleys of this wild island in 2007, baiting jays with nuts to trap and tag them for her dissertation. Before she came along, what researchers knew about the island scrub jay came from observations in just a handful of places. Why elephants never forget - Alex Gendler. How do elephants communicate? 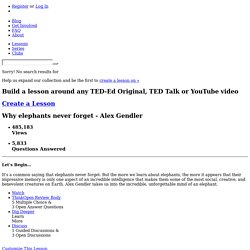 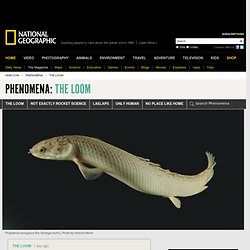 Our ancestors back then were aquatic vertebrates that breathed through gills and swam with fins. Over the next twenty million years or so, our fishy ancestors were transformed into land-walking animals known as tetrapods (Latin for “four feet”). The hardest evidence–both literally and figuratively–that we have for this transition comes from the fossil record. Over the past century, paleontologists have slowly but steadily unearthed species belong to our lineage, splitting off early in the evolution of the tetrapod body. The Thoughtful Animal, Scientific American Blog Network.

Lizard “Sees” With Its Skin For Automatic Camouflage. What an Elephant Knows About You from Your Voice — NOVA Next. Elephants Get the Point of Pointing — NOVA Next. A toddler lifts a finger, pointing at a piece of food she wants that’s across the dinner table. 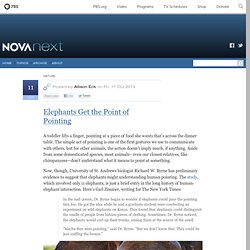 The simple act of pointing is one of the first gestures we use to communicate with others, but for other animals, the action doesn’t imply much, if anything. Aside from some domesticated species, most animals—even our closest relatives, like chimpanzees—don’t understand what it means to point at something. Now, though, University of St. Andrews biologist Richard W. Byrne has preliminary evidence to suggest that elephants might understanding human pointing. In the mid-2000s, Dr. A new study indicates that elephants might be capable of understanding human pointing.

Scientists typically carry out a simple test to determine if an animal understands pointing: put food in two identical containers, point at one, and wait to see what happens. The Man Who Rewrote the Tree of Life — NOVA Next. Carl Woese may be the greatest scientist you’ve never heard of. 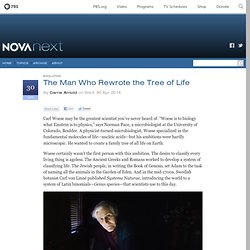 “Woese is to biology what Einstein is to physics,” says Norman Pace, a microbiologist at the University of Colorado, Boulder. A physicist-turned-microbiologist, Woese specialized in the fundamental molecules of life—nucleic acids—but his ambitions were hardly microscopic. He wanted to create a family tree of all life on Earth. Woese certainly wasn’t the first person with this ambition. The desire to classify every living thing is ageless. In Darwin’s Footsteps. Lizard Evolution Virtual Lab. Animals that amaze. How Do Rats Communicate? Wild rats, who live in colonies, and pet rats, who enjoy the company of other rats, are naturally social creatures. 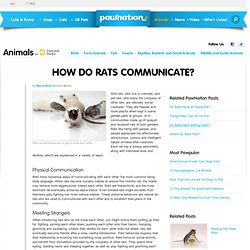 They are happier and more playful when kept in same gender pairs or groups, or in communities made up of spayed and neutered rats of both genders. Rats like being with people, and people appreciate the affectionate, adventurous, curious and intelligent nature of these little creatures. Each rat has a unique personality, along with individual likes and dislikes, which are expressed in a variety of ways. Meeting Strangers. David Gallo: Underwater astonishments. Sara Lewis: The loves and lies of fireflies. More similar than we know: When animals go mad.

A golden retriever chases his tail every morning for hours on end. 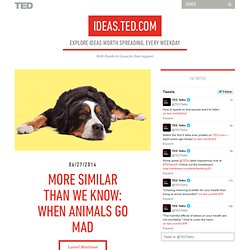 In the evening he compulsively licks his paws till they’re bare and oozy. When he’s given Prozac, he calms down and stops injuring himself … After the death of her mate, a scarlet macaw plucks out every last one of her feathers and doesn’t stop until she’s befriended by a cockatoo … A tabby cat who grew listless and stopped eating after his favorite human went off to college is cheered by the arrival of the family’s new pet rabbit, whom he likes to follow around the house.

Is the dog obsessive-compulsive? Amazing Cicada life cycle - Sir David Attenborough's Life in the Undergrowth - BBC wildlife. Caring for Cuttlefish. Cuttlefish Remember What, Where and When They Ate. You and I both have the ability to travel back in time… at least in our minds. 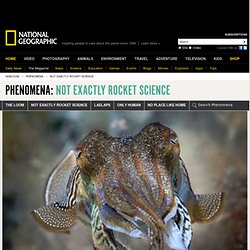 For example, I can remember that last Monday, I was at my desk, writing a post about stomachless animals. You too have a seemingly endless catalogue of the whats, wheres and whens of your life. This ability to remember the what, where and when of our past experiences is known as “episodic memory”. The term was first coined in the 1970s by Canadian psychologist Endel Tulving, who thought that such memories depended on language and were unique to humans. Naked Mole Rats: The Animal Kingdom's Most Functional Dysfunctional Family.

The naked mole rat lives as bees or ants do — in a colony with a queen and soldiers. Naked mole rats are very cute, in a very ugly way. "They have very little hair, no fur, some whiskers, some hair between their toes, like hobbits, and actually some hair inside of their mouth, which keeps their mouth nice and clean while they dig because they dig with their teeth, says David Kessler with the Smithsonian's National Zoo. "They're virtually blind 'cause they spend their entire lives underground, their skin is very thin and wrinkly, and almost translucent. " What Is It About Bees And Hexagons? : Krulwich Wonders... The improbable—but true—evolutionary tale of flatfishes — NOVA Next. Every summer there’s a snowfall in the sea. Instead of drifting down, it falls up, and rather than flakes of ice, it’s made of innumerable diaphanous eggs that rise from the bottom of the ocean to the surface.

There, they hatch into baby flatfish, each no larger than a pinhead. For the first few weeks of life, they look and act like typical fish fry, swimming upright through sun-dappled waters, darting after plankton. Soon enough, though, these young flatfish lose all semblance of normalcy during one of the most difficult puberties of any animal on the planet.

You think pimples and prom were awkward? Flatfish eyes begin in a symmetrical position before migrating to one side. My Life as a Turkey Full Episode Online. Common ancestor of all mammals revealed. A tiny, furry-tailed creature is the most complete picture yet as to what the ancestor of mice, elephants, lions, tigers, bears, whales, bats and humans once looked like, researchers say. These new findings also suggest this forerunner of most mammals appeared shortly after the catastrophe that ended the age of dinosaurs, scientists added. "Species like rodents and primates did not share the Earth with nonavian dinosaurs, but arose from a common ancestor — a small, insect-eating, scampering animal — shortly after the dinosaurs' demise," said researcher Maureen O'Leary at Stony Brook University in New York.

The study was so thorough that the team, made up of 23 scientists from around the world, was able tospeculate on the appearance of this hypothetical ancestor inside and out, from its brain and inner ear bones to its ovaries and even what its sperm may have looked like (it sported a head and tail like modern-day sperm cells do). Researchers Find That Dolphins Call Each Other By 'Name' : The Two-Way.

Our conservation partners in Colombia have just returned from an extensive conservation trip deep in the La Mesenia Reserve forest restoration project—and they have some fantastic images to share! Get That &%$@ Thing Away From Me: Why Humans Hate Bugs. 'You're Invisible, But I'll Eat You Anyway.' Secrets Of Snow-Diving Foxes : Krulwich Wonders... Snail Facts and Information. Bumblebee attacks spider to defend another bumblebee trapped on her web. The Strangest Defence Mechanisms In The Animal Kingdom. Ed Yong: Suicidal crickets, zombie roaches and other parasite tales.