School Lunches. Listen Buying lunch at school might be the first time kids get to call the shots on which foods they'll eat. 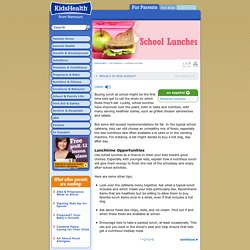 Luckily, school lunches have improved over the years, both in taste and nutrition, with many serving healthier dishes, such as grilled chicken sandwiches and salads. But some still exceed recommendations for fat. In the typical school cafeteria, kids can still choose an unhealthy mix of foods, especially the less nutritious fare often available a la carte or in the vending machine. For instance, a kid might decide to buy a hot dog, day after day. Lunchtime Opportunities Use school lunches as a chance to steer your kids toward good choices. Here are some other tips: Look over the cafeteria menu together. Healthier Alternatives Encourage kids to choose cafeteria meals that include fruits, vegetables, lean meats, and whole grains, such as whole wheat bread instead of white. If you're helping pack a lunch, start by brainstorming foods and snacks that your kids would like to eat.

Why Students Hate School Lunches. Photo MORE than 30 million children trundle through school cafeteria lines every day in the United States and thanks to the Healthy, Hunger-Free Kids Act, which took effect in 2012, they are no longer served greasy pizza, salty French fries and sauced up chicken wings. 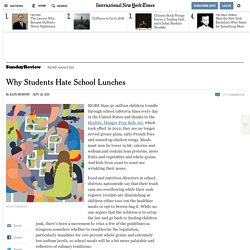 Meals must now be lower in fat, calories and sodium and contain lean proteins, more fruits and vegetables and whole grains. And kids from coast to coast are wrinkling their noses. Food and nutrition directors at school districts nationwide say that their trash cans are overflowing while their cash register receipts are diminishing as children either toss out the healthier meals or opt to brown-bag it.

“Other than mandating more fruits and vegetables, the new regulations haven’t really changed anything except force manufacturers to re-engineer products” so they meet the guidelines but not children’s taste expectations, said Bertrand Weber, director of culinary and nutrition services at the Minneapolis Public Schools. School kids are blaming Michelle Obama for their ‘gross’ school lunches. First lady Michelle Obama's push for healthier school lunches has met teenage friends and foes. 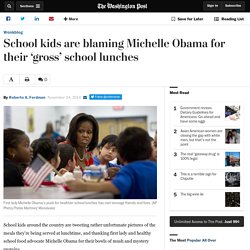 (AP Photo/Pablo Martinez Monsivais) School kids around the country are tweeting rather unfortunate pictures of the meals they're being served at lunchtime, and thanking first lady and healthy school food advocate Michelle Obama for their bowls of mush and mystery proteins. The tweets, which have carried the not-so-subtle #ThanksMichelleObama hashtag, were being sent out at a rate of 40 per minute late last week, but started to gain momentum some 10 days back and are still continuing to be posted as of this morning. USA Today tracked the rise of the "yucky photos" with this neat graphic: In some cases, the sarcastic tweets have poked fun at the strange juxtaposition of healthy foods, such as fruit, and peculiar ones, like whatever this mealy substance is: Or this ball of -- it's unclear. In others, the posts have taken issue with the new, purportedly healthier meals more generally. Roberto A. What Google’s Cafeterias Can Teach Us About School Lunches.

Fifty years ago, a cheap lunch ladled onto a tray was a decent enough perk at premier American companies, such as Ford or Eastman Kodak. 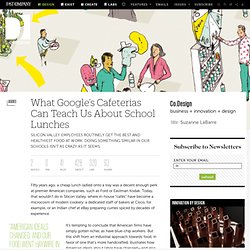 Today, that wouldn’t do in Silicon Valley, where in-house “cafés” have become a microcosm of modern cookery: a dedicated staff of bakers at Cisco, for example, or an Indian chef at eBay preparing curries spiced by decades of experience. It’s tempting to conclude that American firms have simply gotten richer, as have blue-chip workers. But this shift from an industrial approach towards food, in favor of one that’s more handcrafted, illustrates how American ideals about labor have changed—and also, how institutional food went haywire in the bargain. “Food service used to be purely about workplace productivity,” says Fedele Bauccio, the founder of Bon Appétit Management, a company that quietly staffs many of Silicon Valley’s swankiest corporate cafeterias, including eBay, Oracle, and Yahoo! Lewiston trying to make school lunches more appealing.

LEWISTON, Maine —Lewiston schools are offering more options for lunch in hopes that students won’t throw so much food away. 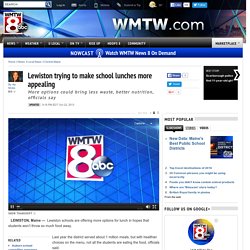 Last year the district served about 1 million meals, but with healthier choices on the menu, not all the students are eating the food, officials said. There are still the staples of the lunch line such as cheese pizza and spaghetti, but now Lewiston schools and schools across Maine are putting more healthy food on every plate. “It’s been kind of a food revolution,” said Alisa Roman, director of nutrition.

“It’s a changeover in offering healthier options to them.” Maine state regulations require student to have a least three components on their plate. “Some kids don’t like the fruits and vegetables, but they have to have it on their tray before we allow them to leave the line, and we do find some of that goes in the trash,” said Theresa Andoniades, a cook. Parents Try School Lunches. Untitled. School Food 1.