She is a video editor and a web developer currently traveling around ASIA. 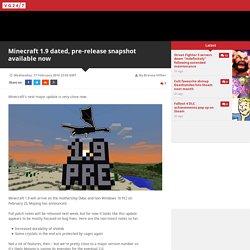 Minecraft 1.9 will arrive on the mothership (Mac and non-Windows 10 PC) on February 25, Mojang has announced. Full patch notes will be released next week, but for now it looks like this update appears to be mostly focused on bug fixes. Here are the non-insect notes so far: Increased durability of shieldsSome crystals in the end are protected by cages again Not a lot of features, then – but we’re pretty close to a major version number so it’s likely Mojang is saving its energies for the eventual 2.0. For more information and to check out the snapshot (pre-release) version, please visit the Mojang Blog. Sometimes we include links to online retail stores. Minecraft 1.9 release date revealed; pre-release patch now available. For those who prefer to actually play Minecraft instead of waiting for a box of goodies to be delivered to their doorstep, Mojang has announced a pre-release version of Minecraft 1.9 is now available to download. 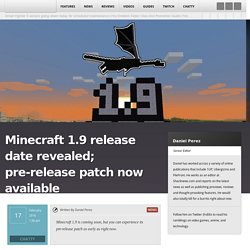 The pre-release of Minecraft 1.9 features various bug fixes, increased durability of shields, and allowed some crystals in the end to be protected by cages again. The pre-release patch also squashes a number of bugs, including the rail duplication glitch, the strange placement of players while riding an entity after swimming with elytra, removing the passenger offset in the Marker ArmorStand, and the resource pack in Minecraft world save file not working.

Now that the Minecraft 1.9 pre-release is available, we’re just a short amount of time until it’s full release is here. Mojang announced the final version of Minecraft 1.9 will be releasing on February 25, 2016. But if you absolutely can’t wait to experience next week’s patch, today’s pre-release patch should do the trick. Super League Gaming Attracts ‘Minecraft’ Fans To Movie Theaters Across U.S., Canada. PLAYA VISTA (CBSLA.com) — Young gamers across the country have been packing movie theaters as part of a tournament with some big bucks at stake. 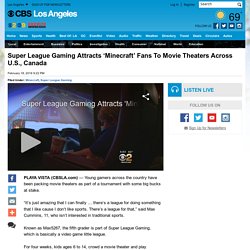 “It’s just amazing that I can finally … there’s a league for doing something that I like cause I don’t like sports. There’s a league for that,” said Max Cummins, 11, who isn’t interested in traditional sports. Known as Max5267, the fifth grader is part of Super League Gaming, which is basically a video game little league. For four weeks, kids ages 6 to 14, crowd a movie theater and play Minecraft on the big screen.

They’re divided into teams and play against one another as well as leagues across the U.S. and Canada. Their parents are in the audience cheering them on just as they would in the stands. Max says it’s no different than playing soccer or football. “They do it ’cause they enjoy it. Minecraft is one of the world’s most popular video games. The creators of Super League Gaming say this isn’t mindless entertainment. Minecraft For Free X - Stop by and play Minecraft. ‘Minecraft: Pocket Edition’ Update Content: Witches, Cauldrons & More Redstone Components Come To Mobile. Microsoft has just released the first major update for Minecraft: Pocket Edition and Minecraft: Windows 10 Beta in 2016. 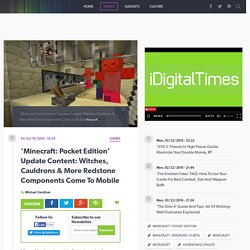 Officially called the Overworld Update, mobile Minecraft version 0.14.0 brings with it the ability to create more advanced mechanical contraptions, fight new enemies, and play around with various cosmetically fun gameplay items. Player reaction to the new update has so far been positive. To introduce the new update, developers took to Twitch to livestream themselves trying to complete a Redstone Puzzle map that was pre-filled with the features coming in the Overworld Update. The video is shown below, but rest assured that despite needing some wall hacking to fix the occasional broken puzzle, #TeamOcelot (Shoghi and Daniel) defeated #TeamSquid (Tommo and Jason) in the race. The advanced mechanical contraptions now possible after the update include comparators, repeaters, dispensers, droppers, hoppers, trapped chests and more.