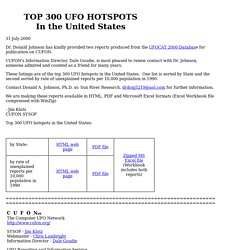 Donald Johnson has kindly provided two reports produced from the UFOCAT 2000 Database for publication on CUFON. 1967: The Overlooked Wave - Hall. Presented by. 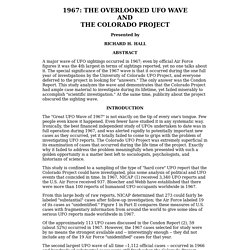 A Revival of the 61-Month Wave Theory. Donald A. 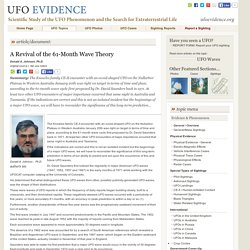 Johnson, Ph.D. original source | fair use notice Summary: The Knowles family CE-II encounter with an ovoid-shaped UFO on the Nullarbor Plateau in Western Australia January 20th was right on target in terms of time and place, according to the 61-month wave cycle first proposed by Dr. David Saunders back in 1971. At least two other UFO encounters of major importance occurred that same night in Australia and Tasmania. Analyzing UFO Waves - Surge of Sightings Imminent? My UFO experience began in a very personal way while only just a boy of ten. 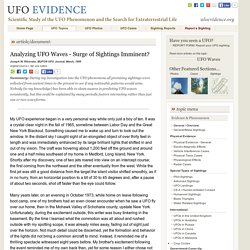 It was a crystal clear night in the fall of 1965, sometime between Labor Day and the Great New York Blackout. Something caused me to wake up and turn to look out the window. In the distant sky I caught sight of an elongated object of over thirty feet in length and was immediately entranced by its large brilliant lights that shifted in and out of my vision. The craft was hovering about 1,200 feet off the ground and around one and a half miles southeast of my home in Medford, Long Island, New York. Shortly after my discovery, one of two jets roared into view on an intercept course; the first coming from the northeast and the other eventually from the west.

Many years later, on an evening in October 1973, while home on leave following boot camp, one of my brothers had an even closer encounter when he saw a UFO fly over our home, then in the Mohawk Valley of Schoharie county, upstate New York. List of Worldwide Major UFO Waves: 1896 to the Present. Preliminary Calibration of a UFO Wave. Ahmad Jamaludin, UFO Research Malaysia original source | fair use notice Summary: The magnitude of UFO waves varies in intensity both in time and space. 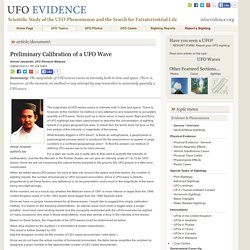 UFO Waves by Richard Hall. Over the past 50 years a seeming outbreak of UFO sightings has captured public and news media attention on average about every five to eight years. 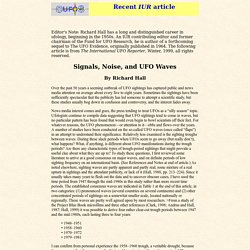 Sometimes the sightings have been sufficiently spectacular that the publicity has led someone to attempt a scientific study, but these studies usually bog down in confusion and controversy, and the interest fades away. News media interest comes and goes, the press tending to treat UFOs as a “silly season” topic. Ufologists continue to compile data suggesting that UFO sightings tend to come in waves, but no particular pattern has been found that would even begin to bowl scientists off their feet. For whatever reasons, the UFO phenomenon—or attention to it—ebbs and flows over the years.

A number of studies have been conducted on the so-called UFO waves (once called “flaps”) in an attempt to understand their significance. The Great UFO Wave: October, 1973 - What Happened? October 1973: What Happened? 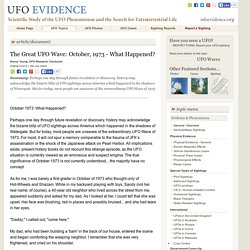 Perhaps one day through future revelation or discovery, history may acknowledge the bizarre blitz of UFO sightings across America which happened in the shadows of Watergate. But for today, most people are unaware of the extraordinary UFO Wave of 1973. For most, it will not spur a memory comparable to the trauma of JFK’s assassination or the shock of the Japanese attack on Pearl Harbor. 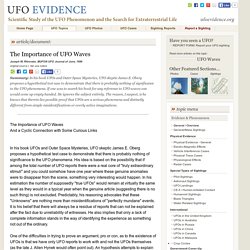 Oberg proposes a hypothetical test case to demonstrate that there is probably nothing of significance to the UFO phenomena. His idea is based on the possibility that if among the total number of UFO reports there were a real core of "truly extraordinary stimuli" and you could somehow have one year where these genuine anomalies were to disappear from the scene, something very interesting would happen. In his estimation the number of supposedly "true UFOs" would remain at virtually the same level as they would in a typical year when the genuine article (suggesting there is no such thing) is not excluded. Theories Regarding the Cause or Stimulus of UFO Waves. UFO-WAVE / UFO Research Malaysia original source | fair use notice Summary: An overview of various theories regarding the cause of UFO waves. 1. 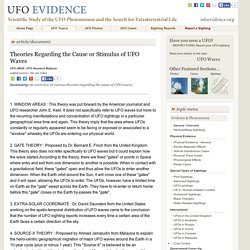 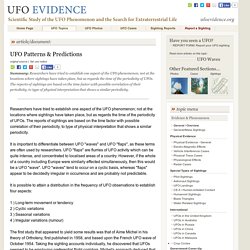 *U* UFO DATABASE: UFO Sightings Maps and Statistics. Belgium UFO Sightings. Among some of the better documented and investigatable cases that have occurred in the last decade is the rash of UFO sightings which took place over Belgium. Some very poignant factors make this case history extremely rare, with regards to how these cases usually run. Foremost of these determinants is the highly uncommon action of the Belgian government and Air Force, in being very open with their own verifications of the sightings with the public at large.

This is the first time that such a sharing of apparently unfiltered military data has been, not only provided, but given over in an earnest attempt to invite public investigation. UFO Wave of 1973 - Main page. Ovni - Les OVNIS vus de près: France 1954, le catalogue des observations.