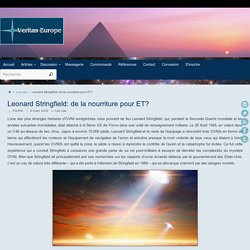 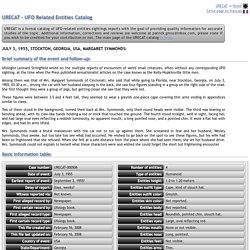 Among them was that of Mrs. Margaret Symmonds of Cincinnati, who said that while going to Florida, near Stockton, Georgia, on July 3, 1955, 03:30 a.m., driving the car with her husband sleeping in the back, she saw four figures standing in a group on the right side of the road. She first thought they were a group of pigs, but getting closer she saw that they were not. These figures were between 3.5 and 4 feet tall, they seemed to wear a greyish one-piece cape covering thin arms ending in appendices similar to claws. 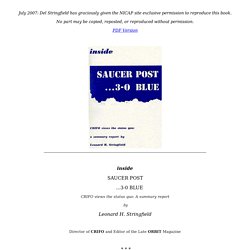 - X-Files. The Event Shortly after 8:31 P.M. on Wednesday, July 17, 1996, radar contact was lost with a Paris-bound jetliner and news of the horrible downing of TWA Flight 800 spread around the world. 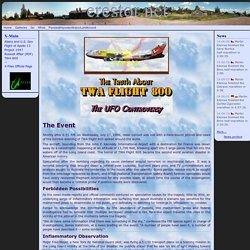 The aircraft, bounding from the John F. Kennedy International Airport with a destination for France was blown away by a catastrophic happening at an altitude of 13,700 feet, breaking apart into 5 large pieces that fell into the waters off of the Long Island coast. Traces Physiques d'OVNI. Les rapports de traces physiques furent étiqueter Rencontres Rapprochés du deuxième type (RR-II) par le défunt J. 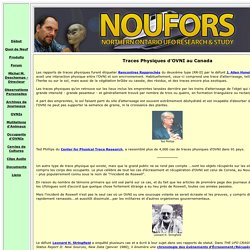 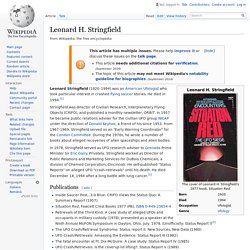 He died in 1994.[1] Stringfield was director of Civilian Research, Interplanetary Flying Objects (CRIFO), and published a monthly newsletter, ORBIT. In 1957 he became public relations adviser for the civilian UFO group NICAP under the direction of Donald Keyhoe, a friend of his since 1953. From 1967-1969, Stringfield served as an "Early Warning Coordinator" for the Condon Committee. During the 1970s, he wrote a number of books about alleged recoveries of alien spaceships and alien bodies. In 1978, Stringfield served as UFO research adviser to Grenada Prime Minister Sir Eric Gairy. Publications[edit] References[edit] ^ Jump up to: a b "WHO's WHO in UFOLOGY". External links[edit] Bio - Leonard Stringfield. Leonard H. Stringfield. Stringfield naît en 1920. 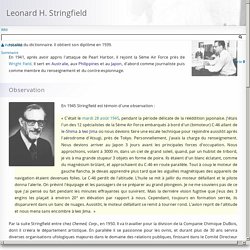 Au lycée, on le surnomme "Webster" parce qu'il aurait mémorisé la totalité du dictionnaire. Il obtient son diplôme en 1939. Leonard Stringfield Case files revealed - Mufon. UFOs: Food For Thought (Or Food For ETs) One of the strangest of all UFO stories on record came from the late Leonard Stringfield, who, during the Second World War and its immediate aftermath, was attached to the U.S. 5th Air Force in a military-intelligence capacity. 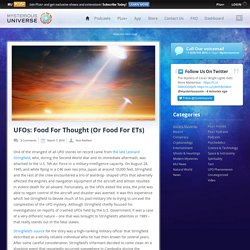 On August 28, 1945, and while flying in a C46 over Iwo Jima, Japan at around 10,000 feet, Stringfield and the rest of the crew encountered a trio of teardrop- shaped UFOs that adversely affected the engines and navigation equipment of the aircraft and almost resulted in violent death for all aboard. Fortunately, as the UFOs exited the area, the pilot was able to regain control of the aircraft and disaster was averted. It was this experience which led Stringfield to devote much of his post-military life to trying to unravel the complexities of the UFO mystery. Although Stringfield chiefly focused his investigations on reports of crashed UFOs held by the U.S. Leonard Stringfield case files revisited - Mufon. Crashed UFOs: The Bolivian Affair. Regardless of whether or not UFOs really have crashed to Earth, there can be no doubt that mentioning the words “crashed” and “UFO” in the same sentence inevitably brings the controversial Roswell, New Mexico affair of July 1947 to mind. 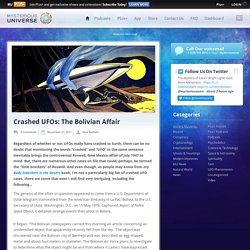 But, there are numerous other cases on file that could, perhaps, be termed the “little brothers” of Roswell. And even though, as people may know from my Body Snatchers in the Desert book, I’m not a particularly big fan of crashed UFO cases, there are some that even I still find very intriguing, including the following… The genesis of the affair in question appeared to come from a U.S. Department of State telegram transmitted from the American Embassy in La Paz, Bolivia, to the U.S. Secretary of State, Washington, D.C., on 15 May 1978. It began: “The Bolivian newspapers carried this morning an article concerning an unidentified object that apparently recently fell from the sky. Six days later a communication was transmitted from the U.S. UFOs: Food For Thought (Or Food For ETs) Ohio’s Freaky Frog-Folk. Loveland is a city in southwest Ohio, USA that has a population of around 12,000, and which was settled back in 1795. 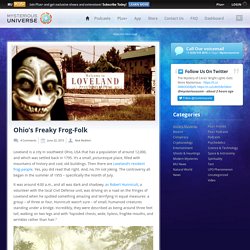