This productivity statistic holds the key to UK prosperity (Dec 2019) As the nation puts it feet up for Christmas after a long, hard decade what lesson should it draw? 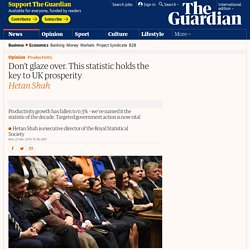 Must try harder. Our productivity in the past 10 years has been truly terrible. In the period before the financial crisis it was growing at around 2% each year, but in the last decade that has slumped to an average growth of 0.3% a year. I can see your eyes starting to glaze over already, but bear with me. The ‘crisis of capitalism’ is not the one Europeans think it is. An avalanche of recent books and articles about the “crisis of capitalism” is predicting its demise or dépassement. 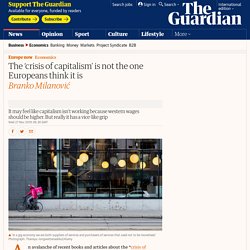 For those who remember the 1990s, there is a strange similarity between this and the literature of the time, which argued that the Hegelian “end of history” had arrived. That theory was proved to be wrong. The former, I believe, is also factually wrong and misdiagnoses the problem. The facts show capitalism to be not in crisis at all. It is stronger than ever, both in terms of its geographical coverage and expansion to areas (such as leisure time, or social media) where it has created entirely new markets and commodified things that were never historically objects of transaction.

The social importance of these new markets is that by placing a price on things that previously had none, they transform mere goods into commodities with an exchange value. These new markets are fragmented, in the sense that they seldom require a sustained full day of work. Capitalism is in crisis. And we cannot get out of it by carrying on as before - Nov 2019. 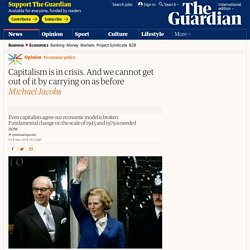 Though the parties pretend that their political differences are large, in economic terms they rarely are. But this one could be different. Of course, elections lead to change. Labour’s victory in 1997 marked a decisive break with the Thatcher-Major years in terms of public spending and welfare policy. Yet New Labour didn’t fundamentally challenge the dominant model of economic policy that it had inherited from the Tories: a globalised and declining manufacturing sector, and deregulated financial and labour markets.

There are exceptions. The sluggish global economy needs to reform – and fast - Oct 2019. They were all there. 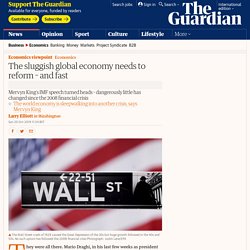 Mario Draghi, in his last few weeks as president of the European Central Bank before handing over to Christine Lagarde; Mark Carney, who will be leaving the Bank of England in January provided the UK government ever finds the time to appoint a new governor; and Jay Powell, the man Donald Trump now deeply regrets ever choosing to run the Federal Reserve. Mariana Mazzucato - article in Wired, Oct 2019. The idea that made Mariana Mazzucato one of the most influential economists in the world came to her in early 2011. 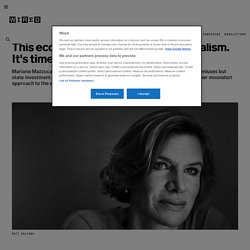 It had been three years since the financial crisis of 2008 and, in the UK, the coalition government of Conservatives and Liberal Democrats had chosen to pursue a fiscal policy of austerity that was forcing councils to cut back public services and leading to a rise of homelessness and crime. “In my neighbourhood after-school clubs, youth centres, public libraries, policing and mental health budgets were all cut, affecting the most vulnerable people in society," she recalls. "It was very sad.” What particularly infuriated Mazzucato was the prevailing narrative that such cuts were necessary to boost competitiveness and innovation. In March 2011, Prime Minister David Cameron gave a speech excoriating civil servants working in government, labelling them “enemies of enterprise”. Mazzucato included her findings in a 150-page pamphlet she submitted to UK policy think tank Demos. Ten points for a better Britain – IPPR report - Sep 2018. The IPPR commission on economic justice sets out a 10-point plan to improve the British economy and make it fairer for its participants. 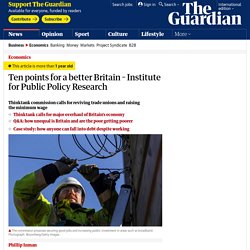 The policy proposals include reviving trade unions in workplaces and raising the minimum wage. Here is a summary of the recommendations. Reshaping the economy The report calls for an activist government with an expanded industrial strategy, focused on spurring economic growth through investment in infrastructure such as transport links. The expectation is that this will improve Britain’s industrial base, drive up exports, raise productivity (the amount of economic output generated per hour worked) and address the regional imbalances in the UK economy. The commission also proposes an industrial strategy act to set out clear goals and criteria for state support for industry, and create an independent industrial strategy committee to provide oversight and guidance.

Securing good pay and good jobs. National minimum wages improve productivity - Jan 2017. Quite unexpectedly, George Osborne, the Chancellor of the Exchequer at the time, used his first Conservative Budget, in July 2015 to slash benefits for low-paid workers – and simultaneously forced businesses to pay them more. 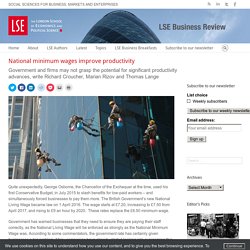 The British Government’s new National Living Wage became law on 1 April 2016. The wage starts at £7.20, increasing to £7.50 from April 2017, and rising to £9 an hour by 2020. These rates replace the £6.50 minimum wage. Government has warned businesses that they need to ensure they are paying their staff correctly, as the National Living Wage will be enforced as strongly as the National Minimum Wage was. According to some commentators, the government rate has certainly given businesses a big problem.