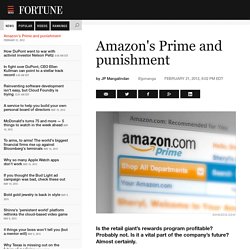 All rights reserved. Fortune.com is a part of the Time.com network of sites. Powered by WordPress.com VIP Email address or Password is incorrect Forgot Password? Want the Full Story? Privacy Policy Thank you for your interest in licensing Fortune content. 1. Amazon Prime: Creating the Total Package? - VI Marketing and Branding. 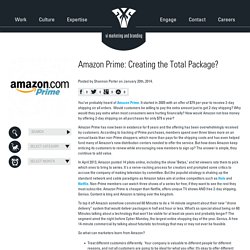 It started in 2005 with an offer of $79 per year to receive 2-day shipping on all orders. Would customers be willing to pay the extra amount just to get 2-day shipping? Why would they pay extra when most consumers were hurting financially? How would Amazon not lose money by offering 2-day shipping on all purchases for only $79 a year? Amazon Prime has now been in existence for 8 years and the offering has been overwhelmingly received by customers. In April 2013, Amazon posted 14 pilots online, including the show "Betas," and let viewers rate them to pick which ones to bring to series. To top it off Amazon somehow convinced 60 Minutes to do a 14-minute segment about their new “drone delivery” system that would deliver packages in half and hour or less. 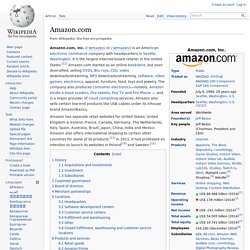 Amazon also offers international shipping to certain other countries for some of its products.[13] In 2011, it had professed an intention to launch its websites in Poland[14] and Sweden.[15] History[edit] The company was founded in 1994, spurred by what Bezos called his "regret minimization framework", which described his efforts to fend off any regrets for not participating sooner in the Internet business boom during that time.[16] In 1994, Bezos left his employment as vice-president of D. E. Shaw & Co., a Wall Street firm, and moved to Seattle. Jeff Bezos incorporated the company as "Cadabra" on July 5, 1994[11] and the site went online as Amazon.com in 1995.[17] Bezos changed the name cadabra.com to amazon.com because it sounded too much like cadaver. 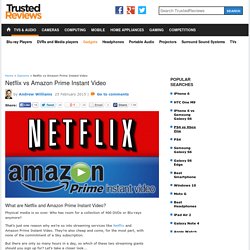 Physical media is so over. Who has room for a collection of 400 DVDs or Blu-rays anymore? That’s just one reason why we’re so into streaming services like Netflix and Amazon Prime Instant Video. They’re also cheap and come, for the most part, with none of the commitment of a Sky subscription. But there are only so many hours in a day, so which of these two streaming giants should you sign up for? Pricing. Which is the best movie streaming service in the UK? Netflix vs Amazon Prime vs Now TV and more.

Over the last few years, movie and TV show streaming services have become increasingly important to the way that we want to consume our content in the UK. 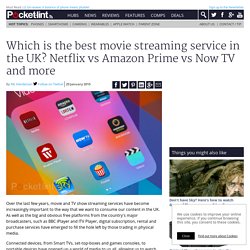 As well as the big and obvious free platforms from the country's major broadcasters, such as BBC iPlayer and ITV Player, digital subscription, rental and purchase services have emerged to fill the hole left by those trading in physical media. Connected devices, from Smart TVs, set-top-boxes and games consoles, to portable devices have opened up a world of media to us all, allowing us to watch what we want and when we want it. We no longer have to sit in front of the TV and wait for the latest episode of EastEnders to air. We don't even have to record it. We can slot it into our lives when it is most appropriate and convenient. Movies too. However, with every rising trend there is a period where choice is perhaps too wide. Netflix vs. Amazon Prime Instant Video: Face-Off. Amazon Prime Instant Video may not have the same kind of household cachet as streaming services like Netflix or Hulu Plus, but it's been growing in popularity over the last few years. 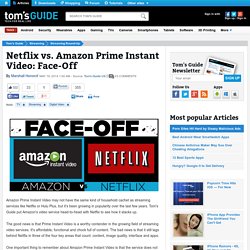 Tom's Guide put Amazon's video service head-to-head with Netflix to see how it stacks up. The good news is that Prime Instant Video is a worthy contender in the growing field of streaming video services. It's affordable, functional and chock full of content. The bad news is that it still lags behind Netflix in three of the four key areas that count: content, image quality, interface and apps. 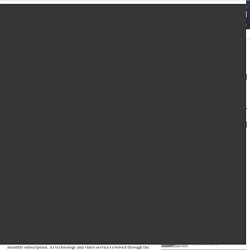 As new consumption habits begin to form, so have traditional means of employing them. Sporting events, live concerts, and the news remain the backbone of television networks, which video services such as Netflix cannot replicate. However, the convenience of viewing your favorite program at your own leisure makes these video streaming services a mainstay for modern consumers. Video services such as Netflix, Hulu and Amazon Instant Video offer a large library of television programs and movies that have already aired or premiered in theaters, allowing consumers to view programs they had previously missed. Contractual agreements with major networks let these services distribute past and current seasons of popular television programs. Netflix. Amazon.pdf. Movie Studio by Amazon for Screens Big and Small. Netflix-spotify-and-now-amc-why-it-s-time-to-adopt-the-subscription-business-mod. Streaming Media: Investing Essentials. The advent of widespread high-speed Internet has catalyzed a dramatic shift in the way people consume media. 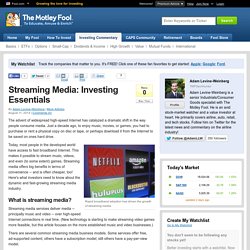 Just a decade ago, to enjoy music, movies, or games, you had to purchase or rent a physical copy on disc or tape, or perhaps download it from the Internet to be saved on ones hard drive. Rapid broadband adoption has driven the growth of streaming media. Today, most people in the developed world have access to fast broadband Internet. This makes it possible to stream music, videos, and even (to some extent) games. Streaming media offers big benefits in terms of convenience -- and is often cheaper, too! What is streaming media? Streaming media services deliver media -- principally music and video -- over high-speed Internet connections in real time. There are several common streaming media business models. Amazon.com Just Upped Its Game Against Netflix. Fire TV. 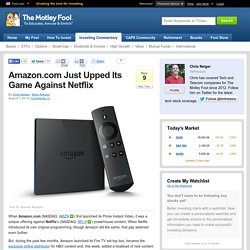 Source: Amazon. Netflix vs Amazon Prime Instant Video. Video streaming is a part of daily life now but are you trying to decide between Netflix and Amazon services? 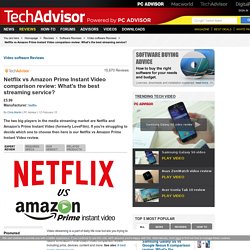 Report: Amazon Greenlights Free, Ad-Backed Stand-Alone Instant Video Service. Analysts say service could be a Netflix slayer, in spite of Instant Video currently seeing less than a tenth the traffic of Netflix It's been three years since Amazon.com, Inc. (AMZN) first launched its Instant Video service for Prime subscribers. Now it's rumored to be preparing to decouple the service from Prime, allowing it to stand on its own, supported by ads. I. Instant Video -- Prepared to Stand Alone? While these reports remain the stuff of rumors, one must wonder if the increasing pace of independent reports could be merely speculative. Extand : quand SPielberg et Halle Berry tentent de changer les modèles. Amazon adoubé par Hollywood- 14 janvier 2015. Streaming Scorecard: Amazon Prime’s Directive. All this week, as broadcast and cable networks present their upcoming shows to a gathering of television critics, Vulture will be taking a look at what's going on in the rapidly growing world of subscription video streaming services.

Yesterday, we looked at the TV-centric Hulu Plus, and tomorrow we'll wrap things up with Netflix. But today we're zooming in on Amazon Prime Instant Video, an SVOD service from the online retail goliath whose dirt-cheap prices and great customer service helped hasten the demise of brick-and-mortar bookstores. Amazon is nowhere near as dominant in the SVOD space, but it is quickly making strides. Subscribers: "We don’t disclose the number of Prime members (or the number of members that use Prime Instant Video)," an Amazon spokeswoman tells Vulture. "But I can tell you we have millions of Prime customers.

" Hit TV shows: 9 percent of Nielsen's top 75 shows from last season are in Prime's streaming library, according to a June study by Piper Jaffray. Amazon Prime Streaming Will Disrupt Netflix, Here's How. Over the past 24 hours, I've read a lot of blog posts about Amazon's new Instant Video streaming offering available to Amazon Prime subscribers, yet there are a bunch of really important aspects about the service no one seems to be discussing. When detailed it is clear that over time, Amazon will absolutely compete with Netflix for the digital delivery of movies and TV shows and become a dominant force in the market. For starters, I don't see anyone talking numbers when it comes to Amazon Prime subscribers or the potential revenue Amazon generates from it. While Amazon has not publicly said how many Prime members they have, analysts on Wall Street all seem to agree that there are about 10M Prime members.

Seattle Times business reporter A new report suggests that Amazon’s streaming-video service, Prime Instant Video, is now twice as large as Hulu, and gaining ground on Netflix. Nielsen, the media-measurement firm, found that 13 percent of all U.S. television households use Prime Instant Video, Amazon.com’s subscription video-on-demand business, compared with 36 percent for Netflix and 6.5 percent for Hulu Plus. Businessinsider. Amazon.pdf. What's the business model that allows Amazon to offer free super saver shipping? Analysis of the Amazon Business Model. Differentiation in a Crowded Marketplace The non-traditional retailer looks like a traditional retailer but has a more complex model than simply profiting from the mark-up on products and services. The non-traditional retailer profits in different ways, generally by maximizing customer lifetime value instead of a focus on individual transactions.