"May you live in interesting times." "May you find everything you are searching for." (chinese curses)

50 Parks Initiative. Alphabet is plotting a digital city full of Google cars, high-speed Internet and maybe more! - Recode. Where to? A History of Autonomous Vehicles. American Cities Are Nowhere Near Ready for Self-Driving Cars. When self-driving cars get here, they’ll make our commutes more efficient and allow us to get the kids to soccer practice without disrupting mom and dad’s work days. 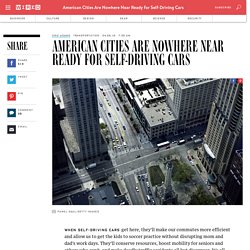 They’ll conserve resources, boost mobility for seniors and others who can’t, and make deadly traffic accidents all but disappear. It’s all great stuff. But the impact of self-driving cars will go deeper than even that, according to researchers at the Illinois Institute of Technology, who’ve begun to study the potential ultra-long-range impacts of self-driving cars on urban environments. Autonomous vehicle roadmap: 2015-2030. Two and a half years ago I wrote a note on the various views about the paths for adopting self-driving vehicles. 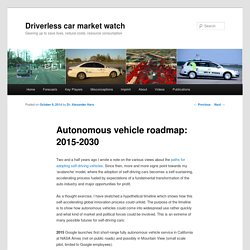 Imagining the Driverless City. Building facades are part of the University of Michigan’s demonstration site, Mcity, where robotic vehicles can be tested. 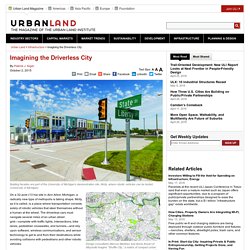 (University of Michigan) Animating Global Innovation Diffusion- Public Transport – CityGeographics: urban form, dynamics and sustainability. From Oslo to New Delhi, mayors around the world are moving to tackle air pollution. Cerdà and Barcelona: The need for a new city and service provision. Urbani izziv, volume 22, no. 2, 2011. 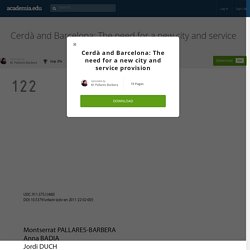 The Density Atlas. Innovation in Cities: “Remove One Zero, Two Zero’s, from the Budget” — The Case of Curitiba. Top 10 Cities of the Year 1000. Urban business models. Entropy and Walking Speed in Big Cities. One of the most interesting things about cities is that as they grow their “urban metabolism" also tends to increase. 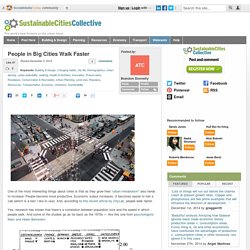 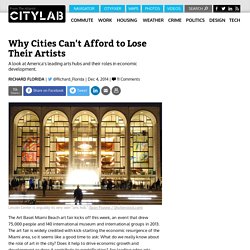 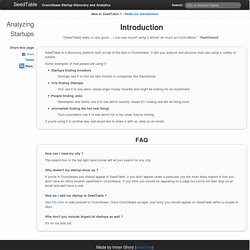 I can see myself using it almost as much as CrunchBase. " -TechCrunch SeedTable is a discovery platform built on-top of the data in Crunchbase. It lets you analyze and discover start-ups using a variety of criteria. Some examples of how people are using it: Startups finding Investors Startups use it to find out who invests in companies like themselvesVCs finding Startups VCs use it to see who's raised angel money recently and might be looking for an investmentPeople finding Jobs Developers and others use it to see who's recently raised VC funding and will be hiring soon Journalists finding the hot next thing!

How can I view my city ? The search box in the top right hand corner will let you search for any city. High-Tech Challengers to Silicon Valley. Is Silicon Valley losing its long established reign over U.S. and global high-technology?

Bruce Katz, director of the Brookings institution's Metropolitan Policy Program and co-author of the new book The Metropolitan Revolution, thinks so. Here's Derek Thompson reporting on Katz's recent talk at the Aspen Ideas Festival: "What's happening now is workers want to be in Oakland and San Francisco," [Katz] told Walter Isaacson. Young workers want to live in a city -- somewhere they can ride bikes, shop locally, walk to their favorite restaurants and bars, and live in a dense urban or urban-lite environment with nearby amenities. But Silicon Valley isn't like a city.

San Francisco has indeed overtaken Silicon Valley as the nation's leading center of venture capital financed start-ups, attracting some $7 billion dollars in venture capital investment in 2012, or one in four of all of venture investments, compared to $4 billion or 15 percent, for San Jose. Why San Francisco May Be the New Silicon Valley. A decade ago, billionaire entrepreneurs Peter Thiel and Elon Musk decided to take booming start-up PayPal public from a small coffee shop along Palo Alto's University Avenue.

The street, the epicenter of Silicon Valley high tech, also helped incubate such now-established giants as Facebook and Google. But today, Thiel has seemingly left the Valley behind. The venture capital funds he runs are based 30 miles north, in a San Francisco building with views of the Golden Gate Bridge. A number of highly publicized start-ups like Twitter, Square, and Pinterest are also located in the heart of urban San Francisco. As Twitter co-founder Jack Dorsey tweeted last February from his new headquarters in San Francisco’s Mid-Market neighborhood, "I love the idea of an urban corporate campus with all the energy and variety that provides.

" Please Bring This to America: Heated Bike Lanes. While we’re still debating in the United States whether and where to build bike lanes at all, here comes yet another cycling innovation from Northern Europe to stoke your seething jealousy. 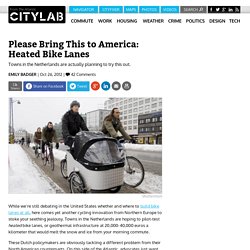 Towns in the Netherlands are hoping to pilot-test heated bike lanes, or geothermal infrastructure at 20,000-40,000 euros a kilometer that would melt the snow and ice from your morning commute. Detroit and Economic Change and Choice. Detroit, Michigan’s urban agriculture has been enjoying stunning popularity for several years. From a city in exponential decline since the national financial crisis of the end of the last decade, the city’s citizens and organisms are eager to promote a new paradigm that could help save the city from inevitable bankruptcy. The politicians, intellectuals and specialists are in agreement in saying that this method, which could be adapted in other great North American metropolises, is probably the path to giving a new life to Detroit. What if the Motor City took the green road? From Motor City to a Dead City Since the second half of the 20th century, Detroit, the signature city of the U.S. automotive industry, has experienced an unbelievable drop in its population base; from a city of 1.85 million inhabitants in 1950, it counted 713,000 people in 2010, a sixty-one percent reduction in its population.

Urban Agriculture: A Solution and Stake. How Our Current Tax System Is Failing Cities. In a nation with more than 19,492 incorporated municipalities, all with varying degrees of autonomy and authority when it comes to designing their fiscal systems, policymakers have fabricated a crazy quilt of local revenue. Travel to Boston and you will find a municipal government that depends primarily on property tax to fund local services. In Cincinnati, however, it is the income tax that rules the day, while in Tulsa it’s the sales tax. It wasn't always like this. Economist Glenn Fisher remarked that in an agrarian economy, "wealth and property are the same things and the ownership of property is closely correlated with income or the ability to pay taxes.

" Consequently, for much of the nation’s history, municipal governments relied on property taxes or a tax on the rich for their own-source revenue (defined as those resources over which the city has the authority to tax or collect a fee, excluding federal and state aid). The Tax Puzzle for Today's Cities. An Urban Agenda Against 'Secular Stagnation' After three-plus years of slow growth, persistently high unemployment, and perennially low consumer confidence, former Treasury Secretary and Harvard economics professor Larry Summers has offered a diagnosis.

Why San Francisco May Be the New Silicon Valley. Downtown and out? The truth about Tony Hsieh’s $350m Las Vegas project. The Secret History of Cars Begins With Bicycles. Ideology and Investment - NYTimes.com. America used to be a country that built for the future. Sometimes the government built directly: Public projects, from the Erie Canal to the Interstate Highway System, provided the backbone for economic growth.