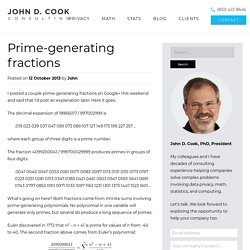 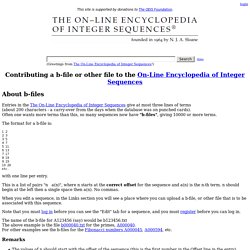 Note that you must log in before you can see the "Edit" tab for a sequence, and you must register before you can log in. Fermat numbers - OeisWiki. This article page is a stub, please help by expanding it. 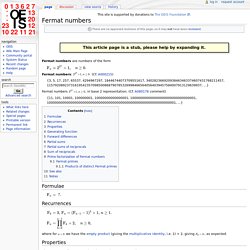 Fermat numbers are numbers of the form Fermat numbers: (Cf. A000215) Fermat numbers in base 2 representation. Formulae Recurrences. Jj's useful and ugly FXT page. Here you find the FXT library the fxtbook: "Matters Computational" (was: "Algorithms for Programmers") the amorphous FFT bucket moved to the fftpage The FXT library Download the latest FXT version: fxt-2018.07.03.tar.gz (approx. 1800kB), distributed under the GPL. 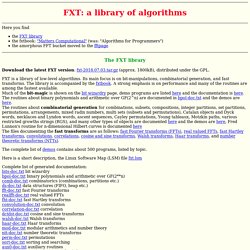 FXT is a library of low-level algorithms. Its main focus is on bit-manipulations, combinatorial generation, and fast transforms. The library is accompanied by the fxtbook. The complete list of demos contains about 500 programs, listed by topic. Here is a short description, the Linux Software Map (LSM) file fxt.lsm. Great Internet Mersenne Prime Search - PrimeNet. Get Elements of Lists—Wolfram Language Documentation. 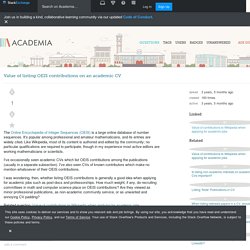 It's popular among professional and amateur mathematicians, and its entries are widely cited. Like Wikipedia, most of its content is authored and edited by the community; no particular qualifications are required to participate, though in my experience most active editors are working mathematicians or scientists. I've occasionally seen academic CVs which list OEIS contributions among the publications (usually in a separate subsection). I've also seen CVs of known contributors which make no mention whatsoever of their OEIS contributions.

I was wondering, then, whether listing OEIS contributions is generally a good idea when applying for academic jobs such as post-docs and professorships. Formula di Perron. Da Wikipedia, l'enciclopedia libera. 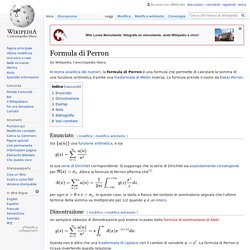 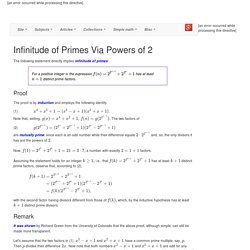 Proof The proof is by induction and employs the following identity Note that, setting, The two factors of are mutually prime, since each is an odd number while their difference equals and, so, the only divisors it has are the powers of Now, a number with exactly factors. Assuming the statement holds for an integer i.e., that has at least distinct prime factors, observe that, according to (2), with the second factor having divisors different from those of which, by the inductive hypothesis has at least distinct prime divisors. Remark It was shown by Richard Green from the Unversity of Colorado that the above proof, although simple, can still be made more transparent. The induction then follows as before.

References A. [an error occurred while processing this directive] |Contact||Front page||Contents||Algebra||Up| Surveyors formula for area of a polygon. If you know the vertices of a polygon, how do you compute its area? 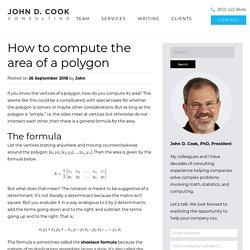 This seems like this could be a complicated, with special cases for whether the polygon is convex or maybe other considerations. But as long as the polygon is “simple,” i.e. the sides meet at vertices but otherwise do not intersect each other, then there is a general formula for the area.