Ce que les 3A doivent présenter le 8 juin by i.silvin on Genially. Le JT des 3eme A. Create Animated Videos for Work or Play. Will a robot take your job? Type your job title into the search box below to find out the likelihood that it could be automated within the next two decades. 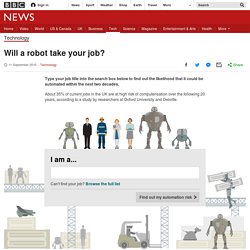 About 35% of current jobs in the UK are at high risk of computerisation over the following 20 years, according to a study by researchers at Oxford University and Deloitte. Tap here for the interactive. Sources. BBC Radio 4 - Robots that Care, Episode 1. Line Following Robots. Line-following robots are popular among robotics hobbyists because these types of robots can be relatively simple to build, and yet are very entertaining as they follow whatever size path you lay out for them. Unlike room-exploration robots that often get stuck against chairs and carpet edges, you don’t have to chase after a well-designed line-following robot. Most line-following robots have two motors, two front sensors, and a basic electronic circuit for autonomous control. But, a great thing about this type of robot is that it easy to make small changes for added complexity. Debate expressions.