Projects to think about 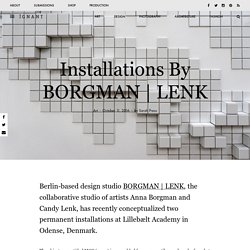 The object group titled MOS (moss) is assembled from square tiles, and can be found at six different locations throughout the building. Placed on architectural beams, staircases, and window frames, their individual shapes result from the architectural space. KLÆDE (cloth) is the second installation designed for Lillebælt Academy. © Mari Luz Vidal. Wespi de Meuron Romeo architects, Hannes Henz · Conversion Of A Stone House In Scaiano. Heineken WOBO: When Beer Met Architecture. Heineken WOBO: When Beer Met Architecture A very wise man, Homer Simpson, once described alcohol as “the cause of, and solution to, all of life’s problems.” 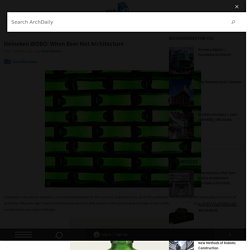 While this may not necessarily be true for all problems, fifty years ago it seemed that beer was going to play a part in solving a housing shortage on the Caribbean island of Curaçao, thanks to a bizarre, yet socially conscious, piece of design. Upon visiting Curaçao during a world tour of his factories in 1960, brewing magnate Alfred Heineken was struck by two things: the beaches were littered with beer bottles - many bearing his name - and there was a shortage of affordable building materials, which meant the lower-classes were consigned to poor quality housing. 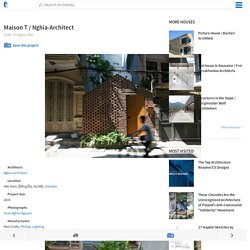 The Perfect Drawing: 8 Axonometric Projections That Lend Architecture a Whole New Perspective. Axonometric drawings are far from easy to draw by hand. 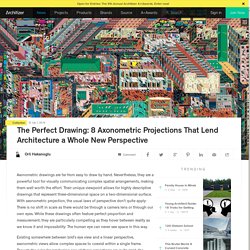 Nevertheless, they are a powerful tool for visually communicating complex spatial arrangements, making them well worth the effort. Their unique viewpoint allows for highly descriptive drawings that represent three-dimensional space on a two-dimensional surface. With axonometric projection, the usual laws of perspective don’t quite apply: There is no shift in scale as there would be through a camera lens or through our own eyes. While these drawings often feature perfect proportion and measurement, they are particularly compelling as they hover between reality as we know it and impossibility: The human eye can never see space in this way. 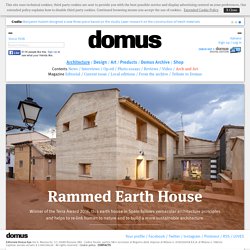 This house attempts to awaken the interest of the community and the curiosity about this type of sustainable buildings that are strongly linked to the territory, the Aragona region in Spain. The project has been inspired by old local earthen buildings regarding their orientation, morphology and the use of local materials. Edra Arquitectura km0, Rammed Earth House, Ayerbe, Spain, 2014 Technical improvements, as adding straw to the mixture to improve thermal behavior, have been applied to the traditional rammed earth technique. It’s also been applied an awareness choice of low tech, low energy and low impact materials and building systems. Upper floors are built in 45cm thick earthen walls and timber decks support the housing spaces. Coverings of interior partitions were made by local clay plasters. South windows have heavy interior curtains and roller exterior wooden shutters to manage shadows. Alexis Dornier · The Roam. The vision of this place was to create community. 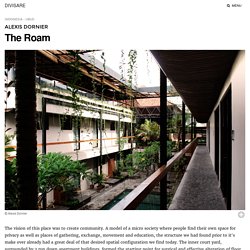 A model of a micro society where people find their own space for privacy as well as places of gathering, exchange, movement and education, the structure we had found prior to it's make over already had a great deal of that desired spatial configuration we find today. The inner court yard, surrounded by 3 run down apartment buildings, formed the starting point for surgical and effective alteration of floor plans by adding more components, knocking down walls, opening solid concrete walls, adding bathrooms and placing large windows that would allow for enough light, fresh air and exciting views towards its surroundings. 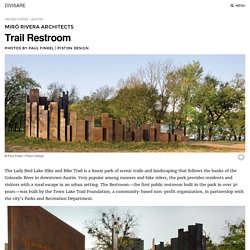 Very popular among runners and bike riders, the park provides residents and visitors with a rural escape in an urban setting. The Restroom—the first public restroom built in the park in over 30 years—was built by the Town Lake Trail Foundation, a community-based non-profit organization, in partnership with the city's Parks and Recreation Department. An Elevated Home With A Geometric Facade – iGNANT.de. A Concrete Seaside Retreat By Rose + Partners – iGNANT.de. On a seaside slope in Chilmark, Massachusetts sit six concrete prefabs designed by architects Peter Rose + Partners. 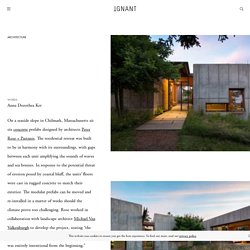 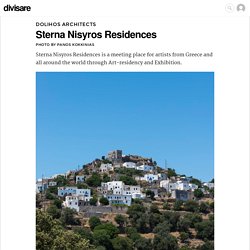 It collapsed, along with the rest castle of the knights after the devastating earthquake of 1933. It is the first house to be restored in the medieval castle of Pantoniki in Emporeios. The restoration owes its high level and preciseness to the research of photographic archives and to the few but significant structural and morphological findings of the excavation and is undertaken by Giorgos Tsironis. Tato Architects, Shinkenchiku-sha · House in Kamisawa. Japan. This building is a reconfiguration of a traditional Japanese wooden house. 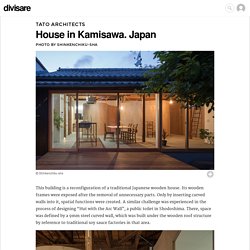 Its wooden frames were exposed after the removal of unnecessary parts. Only by inserting curved walls into it, spatial functions were created. A similar challenge was experienced in the process of designing “Hut with the Arc Wall”, a public toilet in Shodoshima. There, space was defined by a 9mm steel curved wall, which was built under the wooden roof structure by reference to traditional soy sauce factories in that area. An inspiration from cedar barrels of say source was formalized in the curved wall, which showed an aesthetic of self- supporting structure. A Concrete Summer House By BAK Arquitectos. BAK arquitectos constructed the AV house, a concrete summer home in the forest of Mar Azul in Argentina.

Skylodge Is A Transparent Sleeping Capsule Hanging From A Mountain. Located in Peru, Natura Vive's Skylodge suite is a completely see-through sleeping pod that hangs off a mountain. Each suite offers a 300-degree view of the country's renowned Sacred Valley and is equipped with four beds, a dining area and a private bathroom. In order to reach the sky-high capsules, guests need to either climb a 400 ft mountain or hike a trail through ziplines. The pods, which are made from aerospace aluminum, measure 24 ft in length and 8 ft in height and width. Plasma Studio Designed A Quirky Holiday House Among The Mountains in Italy. Designed by Plasma Studio, the Paramount Residence in Sesto, Italy features a slatted angular roof spine that seems to climb over the guest house and across the building. With the aim of improving circulation space in the home, the timber roof structure adds a sleek edge to the mountainous landscape.

Each room in the two-floored holiday house has a view of the terraced gardens and stunning surrounding nature. Casa Invisibile by DMAA. Delugan Meissl Associated Architects created the 'Casa Invisibile', a flexible housing unit, which consists of a prefabricated wood structure. It can be disassembled and transported by lorry quite easily to get turnkey implemented at any designated site. Design and texture of the interior design and façade can be determined by the client from various options listed in a design catalogue.

You can e.g. choose a completely mirror-clad façade that reflects its surroundings like in the sample below. Living On The Road – The New Nomads. Mobility is the ultimate new form of freedom: freedom from routine, traditional values, and geographic restraints. Today we are to more mobile than ever, it has become quite common to spend time in different countries, work in various places and explore the world by moving around. Gestalten's latest publication The New Nomads celebrates this growing trend of being mobile, compiling a wide range of flexible spaces and innovative products that define today's nomads. Through innovative technology, and by (literally) thinking outside the box, the designers behind these concepts give people the freedom to call the entire world their home.

Haffenden House by PARA-Project. Minimal Holiday House In Ibiza By Ramon Esteve. Designed by Spanish architecture firm Ramon Esteve Estudio, 'Na Xemena House' is a minimal holiday home located in Ibiza with panoramic views of the Mediterranean Sea. Through simple geometric forms and bare white facades, the building was created to capture natural light and integrate harmoniously into the surrounding natural landscape of cliffs and sea. The house is also equipped with an infinity pool that is supposed to evoke a "sensation that you are bathing in the sea". All images © Ramon Esteve and Eugeni Pons. A Remote Painter’s Studio On The Chilean Coast By Felipe Assadi. Architecture studio Felipe Assadi created 'Casa Bahia Azul', a concrete house on the Chilean Coast that functions as a painter's studio.

Denmark-based architect Konrad Wójcik re-imagines what it’s like to live sustainably outside of cities with the ‘Primeval symbiosis’ project. Designed while he was still an architecture student, the tree-inspired concept home for two is mounted on a single pole and covered in solar panels. Thehungryarchitect on Instagram: “I'm super excited to introduce this image as the first if a series! Architecture by @peterlbra Such an amazing project. #craft #design #architecture #archvis #modern #cabin #natural #vscocam #coronarender #render #renderi. THE HUNGRY ARCHITECT : Photo.