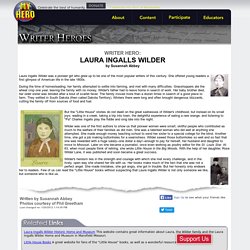 She offered young readers a first glimpse of American life in the late 1800s. During the time of homesteading, her family attempted to settle into farming, and met with many difficulties. Grasshoppers ate the wheat crop one year, leaving the family with no money. Wilder's father had to leave home in search of work. Her baby brother died, her older sister was blinded after a bout of scarlet fever. But the "Little House" stories do not dwell on the great sadnesses of Wilder's childhood, but instead on its small joys: wading in a creek, taking a trip into town, the delightful experience of eating a rare orange, and listening to "Pa" Charles Ingalls play the fiddle and sing late into the night.

Wilder was one of the first authors to show us that pioneer women were smart, skillful people who contributed as much to the welfare of their families as did men. Laura Ingalls Wilder - Biography - Author, Educator, Journalist. Pioneer author Laura Ingalls Wilder wrote the autobiographical "Little House" kids' book series, the basis of the popular television show Little House on the Prairie. 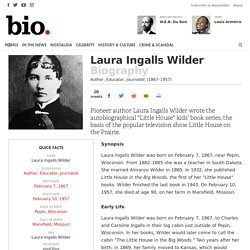 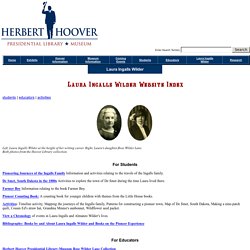 Right, Laura's daughter,Rose Wilder Lane. Both photos from the Hoover Library collection. For Students Pioneering Journeys of the Ingalls Family Information and activities relating to the travels of the Ingalls family. De Smet, South Dakota in the 1880s Activities to explore the town of De Smet during the time Laura lived there. Farmer Boy Information relating to the book Farmer Boy. Pioneer Counting Book: A counting book for younger children with themes from the Little House books. 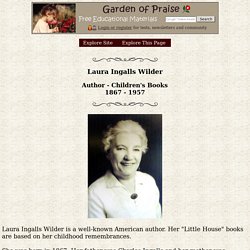 Her "Little House" books are based on her childhood remembrances. She was born in 1867. Her father was Charles Ingalls and her mother was Caroline Quiner Ingalls. They were both from pioneer families who lived in the mid 1800's. Her mother became a teacher at age 16 earning about $3 a week which she used to help support the family of nine. After her parents' marriage they moved to a log cabin in Wisconsin. When Laura was 7 they packed the covered wagon and moved to Minnesota. They were glad to move into their new house which had real doors and glass windows.

Disaster struck one summer day when swarms of grasshoppers came and devoured the wheat crop and all the vegetation. That summer Pa walked 200 miles east to find a job. Their next move was to Burr Oak, Iowa where they would live in and work for a hotel. One day a rich neighbor, Mrs. When Laura was 12 Mary became very ill with meningitis. Laura Ingalls Wilder biography. Laura Ingalls Wilder is the author of Little House on the Prairie and the six other novels that make up what is known as the “Little House” series. 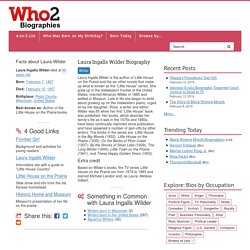 She grew up in the midwestern frontier of the United States, married Almanzo Wilder in 1885 and settled in Missouri. Late in life she began to write about growing up on the midwestern plains, urged on by her daughter, Rose, a writer and editor; Wilder was 65 when her first “Little House” book was published. Her books, which describe her family’s life as it was in the 1870s and 1880s, have been continually reprinted since publication and have spawned a number of spin-offs by other writers. The books in the series are: Little House in the Big Woods (1932); Little House on the Prairie (1935); On the Banks of Plum Creek (1937); By the Shores of Silver Lake (1939); The Long Winter (1940); Little Town on the Prairie (1941); and These Happy Golden Years (1943).