Here you will find a selection of primary and secondary pamphlets and articles related to the course. Enjoy! 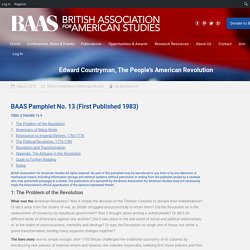 No part of this pamphlet may he reproduced in any form or by any electronic or mechanical means, including information storage and retrieval systems, without permission in writing from the publisher, except by a reviewer who may quote brief passages in a review. The publication of a pamphlet by the British Association for American Studies does not necessarily imply the Association’s official approbation of the opinions expressed therein. The Stamp Act crisis in North Carolina. Dickinson Letters I & II.