In review SIT Sideways LP (part I - III) by playedby. Sideways LP – a groundbreaking definition of what we call the Romanian sound. 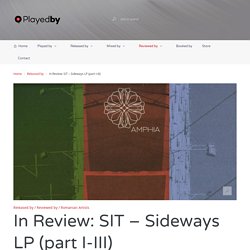 The Romanian scene has offered countless exceptional producers and numerous highly-entertaining DJs in the last decade. Few can be considered as talented and successful, especially when it comes to both categories, as are the members of SIT (Sideways Invisibility Theory), Cristi Cons and Vlad Caia. Two artists with an extensive musical knowledge, as both of them have made their studies in this area, Cristi and Vlad are transmitting what they’ve learned perfectly in their sound, combining classical with electronic, providing the right groove that has its artistic perspective as well. When it comes to their joint musical project, we can definitely say that SIT has been one of the most beloved groups our public has listened to. Productions, DJ sets or live sessions, just name it, and these two prodigies will not stop to amaze you. A-side. B-side. Mihai Pol - Artist Directory. 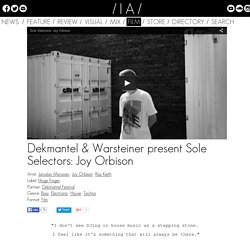 I feel like it's something that will always be there. " In the run-up to the Selectors stage at Dekmantel Festival 2015, we are proud to present the second of our films produced for the Warsteiner & Dekmantel Sole Selectors series with London based producer Joy Orbison, in which he talks about his musical upbringing, career and view on music alongside his uncle Ray Keith, aunt and girlfriend. Shining light on Joy Orbison, the Sole Selectors series catches an artist that is one of the contemporary tastemakers in electronic music. Scoring a monster hit with “Hyph Mngo”, Joy Orbison never compromised on putting out music and playing shows as a DJ. Joy Orbison has become a Dekmantel regular throughout the years. Mixmag Дейв Кларк анонсировал коллекцию ремиксов. Newsletter.

Airmail April edition Hello everyone, hope you are well and appreciating the fact that flights are up and running again. 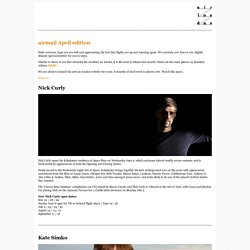 We certainly are! Here is our slightly delayed April newsletter for you to enjoy. Thanks to those of you that attended the excellent air london & 8 Bit event in Miami last month. Check out the event photos on Resident Advisor HERE We are about to launch the new air london website very soon. 6 months of hard work is almost over. Read on... Nick Curly opens his Kehakuma residency at Space Ibiza on Wednesday June 9, which continues almost weekly across summer and is book-ended by appearances at both the Opening and Closing fiestas. The 'Cocoon Ibiza Summer' compilation (2x CD) mixed by Marco Carola and Nick Curly is released at the end of June, with Cassy and Markus Fix joining Nick on the Amnesia Terrace for a Cecille label showcase on Monday July 5. Electronic Music and Arts Festival. Music, news, videos & swag from your favorite crew. Louche Music - Home. SlothBoogie.

David Terranova » Bob Moses press photos. After a tumultuous and dramatic ending to 2013, my 2014 got off to a great start with a one-month trip to Mexico, joining the Crosstown Rebels on their latest Lazarus-infused party venture in the Mayan jungle. 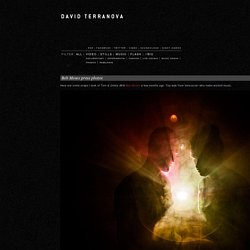 The first 10 days of the trip was dedicated to this REBELRAVE episode in the Tulum area dedicated to Day Zero, while the second half was spent in Mexico City for something exciting which you’ll hear about in the next few months. Like in every REBELRAVE episode, I have taken things up a notch this time, learning some new things (and making loads of mistakes), implementing new ideas that have inspired me from films, documentaries, art and music that I have absorbed over the past few months. An overwhelming amount of inspiration just keeps coming from all directions and REBELRAVE is becoming a platform for me to channel it through under my own interpretation, with my own limitations. The Ripe. Sounds Of A Tired City. RADIOHEAD.COM. Hi, and kicking off tonight in London with the Archie Bronson Outfit, it's a nation-wide week of live gigs to celebrate the halls, pubs and clubs that make up our live music scene. 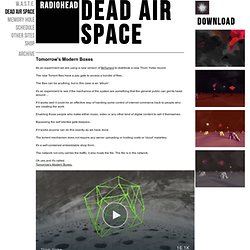 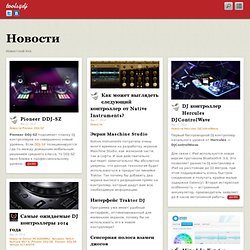