The STAT Trade Times published every month is dedicated to provide in-depth information coverage for the Aviation, Tourism, Shipping & Transport industries, globally. The STAT Trade Times is the only integrated transport and tourism news source which is appreciated and used by the decision makers for their commercial benefits since 1986. 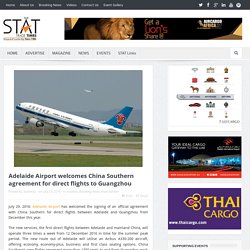 The new services, the first direct flights between Adelaide and mainland China, will operate three times a week from 12 December 2016 in time for the summer peak period. The new route out of Adelaide will utilise an Airbus A330-200 aircraft, offering economy, economy-plus, business and first class seating options. China Southern’s new flights represent more than 1300 seats to and from Guangzhou each week. Adelaide Airport Managing Director, Mark Young, said the airport was delighted to attract a mainland China service, further expanding Adelaide’s international network.

“We expect this new service will create significant inbound and outbound tourism opportunities as well as attractive export links into one of China’s largest cities,” Young said. Freight volumes at Leipzig/Halle Airport cross half a million tonne mark in H1/2016. July 29, 2016: Freight volumes at Leipzig/Halle Airport, Germany’s second-largest cargo hub, rose by 6.7 percent to a figure of approx. 512, 613 tonnes between January and June this year. 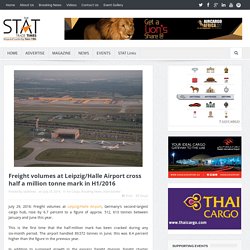 This is the first time that the half-million mark has been cracked during any six-month period. The airport handled 89,572 tonnes in June; this was 8.4 percent higher than the figure in the previous year. APAC airlines record 8% growth in passenger traffic; air cargo sees modest growth. July 29, 2016: Preliminary traffic figures for the month of June released today by the Association of Asia Pacific Airlines (AAPA) showed continued healthy growth in international air passenger demand. 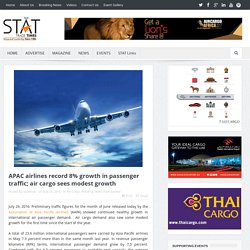 Air freight volumes for Asian airlines grew by 4.1 percent as measured in freight tonnekilometre (FTK) terms. 11 million tonnes of trade flowed through Ports of Cork and Bantry in 2015. July 29, 2016: 2015 was a very good year for the Port of Cork and subsidiaries. 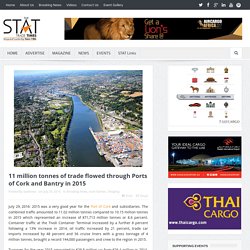 The combined traffic amounted to 11.02 million tonnes compared to 10.15 million tonnes in 2015 which represented an increase of 871,713 million tonnes or 8.6 percent. Container traffic at the Tivoli Container Terminal increased by a further 8 percent following a 13% increase in 2014, oil traffic increased by 21 percent, trade car imports increased by 48 percent and 56 cruise liners with a gross tonnage of 4 million tonnes, brought a record 144,000 passengers and crew to the region in 2015. Turnover for the year 2015 amounted to €29.8 million up from €26.4 million in 2014. Consolidated Profit on ordinary activities before taxation amounted to €5.3 million compared to €2.7 million in 2014, an increase of €2.6 million. In 2015, the Port’s commitment to the development of infrastructure was supported by AnBordPleanala by the granting of planning permission to the further development of Ringaskiddy port. 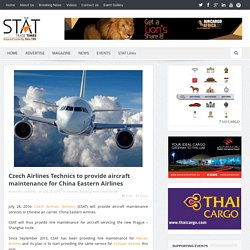 CSAT will thus provide line maintenance for aircraft servicing the new Prague – Shanghai route. Since September 2015, CSAT has been providing line maintenance for Hainan Airlines and its plan is to start providing the same service for Sichuan Airlines this year. China Eastern Airlines is launching a new regular direct scheduled service between Prague and Shanghai on June 23, 2016. From this date, CSAT will provide China Eastern Airlines with line maintenance of its Airbus A330 and, eventually, Boeing B767 and B777, arriving in Prague on Tuesdays, Thursdays and Sundays. The service agreement was entered into for an unlimited period of time. “China Eastern Airlines is the third Chinese air carrier with whom CSAT has a Line Maintenance Agreement. DP World makes progress in first half of 2016 amid challenging market conditions. Arvato launches healthcare business at new logistics centre in Gennep, Netherlands. July 28, 2016: Arvato Healthcare is taking a targeted approach to further expanding its European network for Healthcare services. 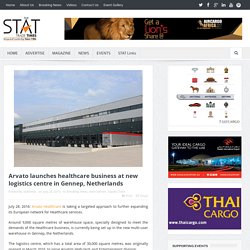 Around 9,000 square metres of warehouse space, specially designed to meet the demands of the Healthcare business, is currently being set up in the new multi-user warehouse in Gennep, the Netherlands. The logistics centre, which has a total area of 30,000 square metres, was originally opened in March 2016, to serve Arvato’s High-tech and Entertainment division. From this summer onwards, Arvato Healthcare will carry out various services for its customers from the Gennep site, including the distribution of medical devices to destinations in Europe, the Middle East and Africa.

The Gennep site will initially have a total of 1,200 pallet locations and 1,500 shelving rack bays available for storing these products. Hard times for Air Astana as it sees passenger numbers down by 7 percent. July 27, 2016: Air Astana, Kazakhstan’s flag carrier, recorded a net loss of $6.6 million, and an operating profit of $0.975 million, for the first half of 2016. 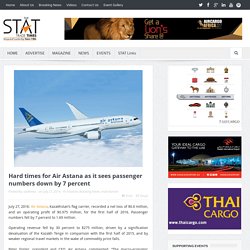 Passenger numbers fell by 7 percent to 1.69 million. Operating revenue fell by 30 percent to $275 million, driven by a signification devaluation of the Kazakh Tenge in comparison with the first half of 2015, and by weaker regional travel markets in the wake of commodity price falls. DP World signs MOU with Taiwan International Ports Corporation. July 27, 2016: Global trade enabler DP World and the state run Taiwan International Ports Corporation (TIPC), have signed a Memorandum of Understanding (MoU) for the development of Kaohsiung Port’s Terminal 7 in Taiwan. 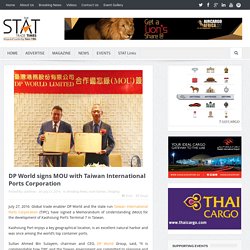 Kaohsiung Port enjoys a key geographical location, is an excellent natural harbor and was once among the world’s top container ports. Sultan Ahmed Bin Sulayem, chairman and CEO, DP World Group, said, “It is commendable how TIPC and the Taiwan government are committed to planning and steering the country’s economic growth, building a better future for generations to come.” “Our strategy in developing in strategic locations where our customers want us to be, serving global trade and being able to handle the new generation of ultra large vessels shows how we are investing in the future, translating our vision into reality. “Kaohsiung was once a fishing village as was Dubai and we have a common experience. Shippers meet in Sri Lanka to discuss key shipping, air cargo and trade facilitation issues. July 27, 2016: Shippers’ representatives from Asia, Africa and Europe will meet in Sri Lanka this week to discuss key issues related to air cargo, shipping, and trade facilitation issues globally. 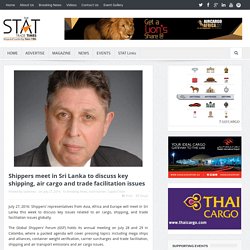 The Global Shippers’ Forum (GSF) holds its annual meeting on July 28 and 29 in Colombo, where a packed agenda will cover pressing topics including mega ships and alliances, container weight verification, carrier surcharges and trade facilitation, shipping and air transport emissions and air cargo issues. The event is hosted by the Sri Lankan Shippers’ Council, which is celebrating its 50th anniversary, and features prominent contributors such as Edmund Hughes from the International Maritime Organisation (IMO) and Djibo Boubacar, Director of the Air Transport Bureau at the International Civil Aviation Organisation (ICAO). Etihad Airways launches second A380 service to New York in response to passenger demand. July 27, 2016: Etihad Airways plans to increase Airbus A380 service between New York’s John F. 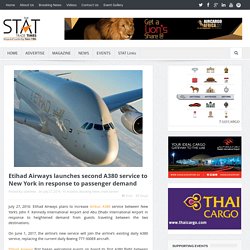 Kennedy International Airport and Abu Dhabi International Airport in response to heightened demand from guests traveling between the two destinations. On June 1, 2017, the airline’s new service will join the airline’s existing daily A380 service, replacing the current daily Boeing 777-300ER aircraft. Etihad Airways first began welcoming guests on board its first A380 flight between New York JFK and Abu Dhabi in November 2015. “The response we have received from Etihad Airways guests traveling between Abu Dhabi and New York since we launched the service nearly a decade ago has been phenomenal,” said Peter Baumgartner, chief executive officer, Etihad Airways’. The main deck of the aircraft features 415 Economy Smart Seats with the latest Panasonic eX3 entertainment system, providing more than 750 hours of on-demand entertainment, improved gaming and high definition screens across all cabins.

DB Schenker names Oliver Seidl as chief financial officer. July 26, 2016: DB Schenker appoints Oliver Seidl as the new chief financial officer and he will assume his role at the earliest possible availability. He is currently CFO of Media-Saturn-Holding in Ingolstadt. Seidl brings many years of experience in diverse finance-related management positions and as a managing director and management board member, including in listed global corporations.

From 2010 to 2013, he was chairman of the Management Board at Loewe AG, having previously served as the management board member for finance and services. Cargloux flies endangered tigers to their safe home in Vietnam. July 25, 2016: Cargolux, Luxembourg based all cargo airline, transported four tigers from their origin in the Czech Republic to Luxembourg and onwards to Hanoi on a Cargolux 747 freighter. The three female and one male animals belong to the species of Indochinese Tigers, known as Hổ Đông Dương in Vietnam, and only around 600 are currently alive in the wilderness of Southeast Asia. The four animals that Cargolux has flown will spend their lives in the safety of Hanoi Zoo as it is one of Vietnam’s national animals. Cross-border ecommerce, a trillion dollar opportunity. Plunging into global e-commerce can feel overwhelming.

If you’ve ever wondered how you could easily manage the intricacies of duties and taxes, currency conversion, customs processes and the constantly changing regulations – in addition to your current responsibilities – take notice. On the surface, cross-border e-commerce can appear intimidating to even the savviest of retailers. But embracing it will open up your business to a trillion dollar opportunity. Yes, trillion: According to eMarketer, global e-commerce sales in 2016 are expected to reach $2 trillion, up from $1.67 trillion in 2015.

Once you dive beneath the surface, you’ll find an amazing world filled with opportunity. Two-thirds of the world’s online purchasing power is outside the United States. B&H Worldwide appoints new agent for Morocco. July 23, 2016: B&H Worldwide, aerospace logistics provider, has appointed North American freight forwarder ACX (Advanced Cargo Express) as its agent for Morocco. ACX is a well-established operator with considerable aerospace industry experience, headquartered at Casablanca’s Mohammed V Airport, and is also able to provide direct airside capability at the airport. “Partnering with ACX means we can actively take advantage of the growing aerospace opportunities in Morocco,” states Stuart Allen, CEO, B&H Worldwide. “Their capabilities and experience are an excellent fit with the B&H model and we look forward to a long and mutually productive partnership.”

Alain Pelletier, managing director, ACX, adds, “Our collaboration in Morocco under the umbrella of the worldwide leader in the AOG field will enable us to grow and expand the quality of our service offering in this very challenging industry.” Ethiopian Cargo appoints new GSSA’s for Italy and France. Bangor airport receives license to refuel Trans-Atlantic flights to Cuba. Air freight volume increases for Panalpina in the first six months of 2016. AMI’s Durban growth takes off to greater heights due to ‘fly-direct’ policy. July 20, 2016: The Durban office of AMI, the world’s largest trade-only airfreight and express wholesaler, has seen healthy growth of 7.4 percent in the first quarter, but this was overtaken by the second quarter’s growth at 118 percent. UPS Worldwide Express expands package service footprint in Myanmar, Albania and Dominican Republic.

Cargolux adds biggest customer’s logos to its livery to honor them. July 20, 2016: Cargolux, Europe’s leading all cargo airline, honors its top customers for their continued support by adding their name and logos to the livery of its aircraft with a ‘Powered By’ slogan. Kühne & Nagel leads the list of top Cargolux customers. Port of Antwerp signs five year agreement with port of Bandar Abbas to support trade growth in Iran. July 20, 2016: Antwerp Port Authority signed a collaboration agreement with Shahid Rajaee Port Authority which controls the port of Bandar Abbas in Iran last week. The agreement runs for a period of five years, after which it can be renewed.