Facebook. Report: Murdoch's ex-wife is dating Vladimir Putin. In this Oct. 9, 2008 file photo a two and a half month female tiger cub, no name yet given, looks at, at the Novo Ogaryovo residence of Russian Prime Minister Vladimir Putin, right, outside Moscow. 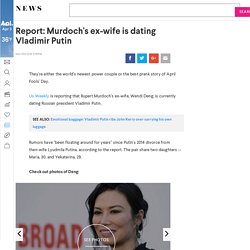 Putin said on TV Thursday Dec. 16, 2010 he loves Buffy, his new puppy, even though the Belgian shepherd leaves puddles and piles around the house. Putin, who was referred to as "Alpha Dog" by U.S. diplomats in a leaked diplomatic cable published recently by WikiLeaks, is in his element around animals. (AP Photo/RIA Novosti, Alexei Nikolsky, Pool, File) FILE - In this file photo taken on Monday, Aug. 3, 2009, the then Russian Prime Minister Vladimir Putin ia seen riding a horse while traveling in the mountains of the Siberian Tyva region (also referred to as Tuva), Russia, during his short vacation. Putin has become alternately notorious and beloved for an array of adventurous stunts, including posing with a tiger cub and riding a horse bare-chested.

Jackie 2.0. There is something so familiar about the young brunette girl in the club wearing a simple white tee and jeans. 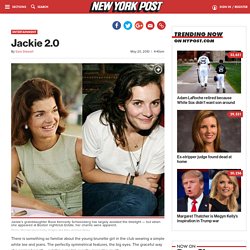 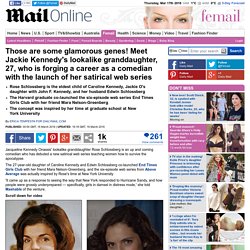 The 27-year-old daughter of Caroline Kennedy and Edwin Schlossberg co-launched End Times Girls Club with her friend Mara Nelson-Greenberg, and the six-episode web series from Above Average was actually inspired by Rose's time at New York University 'It came up as a response to seeing the way that New York responded to Hurricane Sandy, and how people were grossly underprepared — specifically, girls in damsel in distress mode,' she told Mashable of the venture. Ryan Reynolds reveals the most romantic thing he’s done for wife Blake Lively. Blake Lively is one lucky woman! 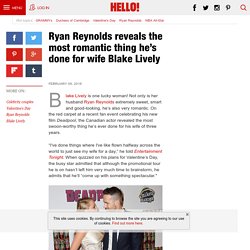 Not only is her husband Ryan Reynolds extremely sweet, smart and good-looking, he’s also very romantic. On the red carpet at a recent fan event celebrating his new film Deadpool, the Canadian actor revealed the most swoon-worthy thing he’s ever done for his wife of three years. “I've done things where I've like flown halfway across the world to just see my wife for a day,” he told Entertainment Tonight. When quizzed on his plans for Valentine’s Day, the busy star admitted that although the promotional tour he is on hasn’t left him very much time to brainstorm, he admits that he’ll “come up with something spectacular.

" Ryan only has eyes for his wife Blake. Blake and Ryan left their precious 14-month-old daughter, James, at home on Monday night (Feb. 8) to attend the event in New York. Read more: 12 of the cutest things Ryan has said about his family Photo: Instagram.com/@BlakeLively. Ryan Reynolds: news, photos, biography, pictures, videos, style - hello! Canada. Vladimir Putin's mystery eldest daughter Maria 'pictured' for the first time. Dressed as a '19th century European burgheress', this is Vladimir Putin's 'secret' eldest daughter, a medical student who has has a penthouse overlooking the US embassy in Moscow. 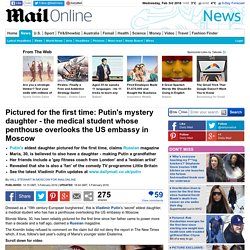 Elvis Presley performing in the 1960s. The verdict is in: Cuba Gooding Jr.’s manic and moody portrayal of O.J. Simpson in TV's new ‘Trial of the Century’ miniseries leaves little doubt that HE DID IT. Almost like the 'trial of the century' itself, this new 10 episode miniseries is a wildly thrilling and absurdly funny guilty pleasure with every salacious detail exaggerated and surprise twist exploited for dramatic flair. 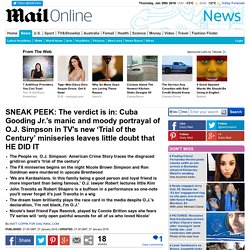 Whether you remember every second of the O.J. Simpson murder trial, or can't pick Judge Ito from AC Cowlings, you'll be sure to be entertained by The People vs. O.J. Simpson: American Crime Story. It begins the June 1994 night Nicole Brown Simpson and Ron Goldman were brutally hacked to death in the upscale Brentwood section of Los Angeles. Cops, including the soon to be infamous Detective Mark Fuhrman (Steven Pasquale), arrive at the scene and realize the female victim is the former wife of football legend turned movie Star O.J.

When they get O.J. on the phone and tell him Nicole is dead he sure acts upset but afterwards the lead investigator remarks, 'He didn't ask how she died.' Cuba Gooding Jr. O.J. Celine Dion 'too devastated' for brother Daniel's funeral after René Angélil's death. Celine Dion suffered crushing losses last week - first the death of her husband of 21 years, René Angélil, followed by her brother Daniel Dion's passing two days later, and both to cancer. 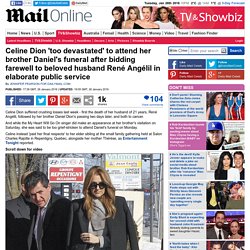 Putin rides submersible to bottom of Black Sea, finds plenty of amphorae ‘scattered around’ (VIDEO) Vladimir Putin has taken a ride to the depths of the Black Sea as part of a Russian Geographical society expedition. 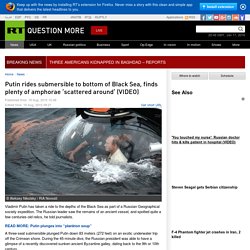 The Russian leader saw the remains of an ancient vessel, and spotted quite a few centuries-old relics, he told journalists. READ MORE: Putin plunges into “plankton soup”