Need to be filed properly

MISH MASH ~ these need to be filed proprly too

Beautiful Pictures sur Twitter : "A pretty day in the mountains surrounded by untouched snow. MOVE. 17-Year-Old Self-Taught Mexican Artist Creates Stunning Watercolors And Pencil DrawingsOnemorepost. If you’ve ever secretly wanted to be an artist, odds are that you are feeling quite a bit of hatred towards Dany Lizeth, a 17 year old girl from Mexico that is making a splash on the internet for her stunning paintings and pencil sketches. 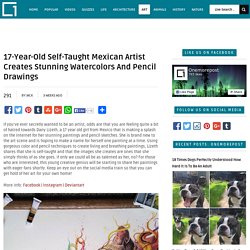 She is brand new to the art scene and is hoping to make a name for herself one painting at a time. Using gorgeous color and pencil techniques to create living and breathing paintings, Lizeth shares that she is self-taught and that the images she creates are ones that she simply thinks of as she goes. If only we could all be as talented as her, no? For those who are interested, this young creative genius will be starting to share her paintings with eager fans shortly. Keep an eye out on the social media train so that you can get hold of her art for your own home! More info: Facebook | Instagram | Deviantart. Screen Recorder. YouTube. Earth Pics sur Twitter : "Lake Superior cave filled with icicles and frost.

Spirit Bear Family - The Nature of Things. Search - WPSD Local 6: Your news, weather, and sports authority. Online Shopping for Canadians. Onemorepost. Hit and run video. Beautiful Pictures sur Twitter : "A really cool little town in the Netherlands. Beautiful Pictures sur Twitter : "Vestrahorn, Iceland. Photo by Kris Williams. Judge Stands In Disbelief When He Sees Who's Singing On Stage... Amazing! - InspireMore. Facts sur Twitter : "Soteriophobia is a psychological condition in which causes a person to refuse depending on others out of fear of being disappointed." 50 Incredible Photos You May Not Have Seen Before - Jarty.Net. #1. 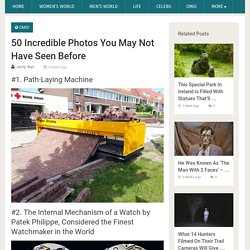 Path-Laying Machine #2. The Internal Mechanism of a Watch by Patek Philippe, Considered the Finest Watchmaker in the World #3. Sunset and Eclipse Happening at the Same Time #4. . #5. . #6. . #7. . #8. . #9. . #10. . #11. . #12. . #13. . #14. . #15. . #16. Life on Earth sur Twitter : "Took a picture through my sunglasses at the beach with my phone... Life on Earth sur Twitter : "Single Picture Explains How Aperture, Shutter Speed, And ISO Work In Photography. 12 Genius Camera Phone Hacks You Never Thought Of. Distortion of reality? Belgian town disputes award-winning photographs. Everyday Things You're Doing Wrong. Pictures Of Plankton From Underneath A Microscope. Archaeologists Unearth Ancient Greek Mosaics In Turkey. Beneath the Turkish city of Zeugma lies something you probably won't find by taking a shovel to the patches of dirt in your backyard. 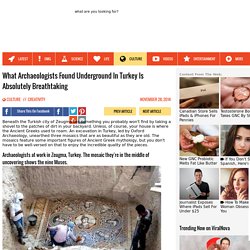 Unless, of course, your house is where the Ancient Greeks used to roam. An excavation in Turkey, led by Oxford Archaeology, unearthed three mosaics that are as beautiful as they are old. The mosaics feature some important figures of Ancient Greek mythology, but you don't have to be well-versed on that to enjoy the incredible quality of the pieces. Archaeologists at work in Zeugma, Turkey. The mosaic they're in the middle of uncovering shows the nine Muses. The muse Thalia. Ocean and Tithys. An aerial view of the excavation. The excavation lit up at night. For more information on the Zeugma excavations, watch the video below. (via Laughing Squid) Liquid Mind - Liquid Mind X: Meditation (Full Album)

Animals Death And The Afterlife with Animal Communicator Laura Stinchfield. How to communicate with your pets. My Unusual Home. Interesting Fact, World Fact, Funny Fact, All facts about you and your world. A METEOR DID HIT RUSSIA ON 2/15/13 !!! Begin with Yes - Timeline Photos. This River in Colombia Turns Bright Red Each Year. The river shown in the photographs below is Caño Cristales, an amazingly colorful river in Colombia. 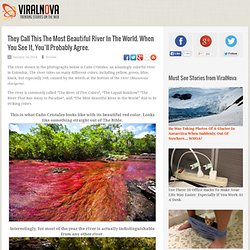 The river takes on many different colors, including yellow, green, blue, black, but especially red, caused by the weeds at the bottom of the river (Macarenia clavigera). The river is commonly called “The River of Five Colors”, “The Liquid Rainbow” “The River That Ran Away to Paradise”, and “The Most Beautiful River in the World” due to its striking colors. This is what Caño Cristales looks like with its beautiful red color. Looks like something straight out of The Bible. Interestingly, for most of the year the river is actually indistinguishable from any other river. It’s normally just a bed of rocks covered in dull green mosses in the cool, clear current. However, for a short period of time every year, the river comes to life in a vibrant explosion of colors.

This is what the red weed known as Macarenia clavigera looks like. Source: Atlas Obscura. 14 Mind Hacks That Blow Those Life Hack Articles Out Of The Water. Life hacks are almost too common these days, but what about mind hacks? 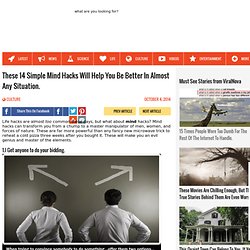 Mind hacks can transform you from a chump to a master manipulator of men, women, and forces of nature. These are far more powerful than any fancy new microwave trick to reheat a cold pizza three weeks after you bought it.