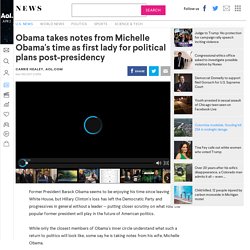 While only the closest members of Obama's inner circle understand what such a return to politics will look like, some say he is taking notes from his wife, Michelle Obama. According to Vox, which interviewed six current and former Obama aides, the former president plans to take relatively neutral political steps moving forward. He'll channel his wife's approach to the role of first lady as his model, focusing primarily on nonpartisan solutions to America's issues.

BritishMonarchy sur Twitter : "Some more highlights from today's events to commemorate the 75th Anniversary of the Battle of Britain #BoB75. Earth Pics sur Twitter : "Infinite mirrors in a room. BritishMonarchy sur Twitter : "10th July 1940 marked the start of the Battle of Britain – 200 patrols were flown by @RoyalAirForceUK that day #BoB75. JusticeForVictims sur Twitter : "The handsome smooth #PaulNewman #HollywoodGreats... Earth - Eight evocative images celebrating nature. Photography has the power to move people – to evoke strong emotions In only its second year, the BigPicture Natural World Photography Competition has received over 6,000 incredible images of our natural world. 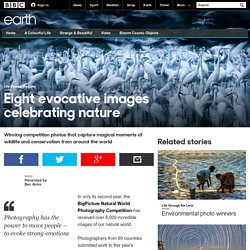 Photographers from 69 countries submitted work to this year's contest, run by the California Academy of Sciences, San Francisco, US, all hoping to win in their chosen category. The competition’s organisers hope to highlight photography as a way of celebrating and illustrating the rich diversity of life on Earth, and as a way of inspiring action. It’s like a painting – moody, evocative, elegant, and simply beautiful The overall winning image, titled Flying Egrets, was shot by photographer Zsolt Kudich. Though haunting in appearance, the image highlights a resilient species’ dramatic recovery since the late 19th Century, when the birds' showy breeding feathers were highly sought after by hunters.

“This year’s winning image really grabbed the judges. SHOCKING Color Photos of the Attack on Pearl Harbor. The 7 December 1941 Japanese raid on Pearl Harbor was one of the great defining moments in history. 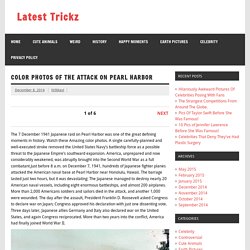 Watch these Amazing color photos. A single carefully-planned and well-executed stroke removed the United States Navy’s battleship force as a possible threat to the Japanese Empire’s southward expansion. America, unprepared and now considerably weakened, was abruptly brought into the Second World War as a full combatant.Just before 8 a.m. on December 7, 1941, hundreds of Japanese fighter planes attacked the American naval base at Pearl Harbor near Honolulu, Hawaii.

35 Of The Funniest Coincidences EVER… It’s Hard To Believe These Weren’t Deliberate.Onemorepost. I wonder if they named him Kittler. 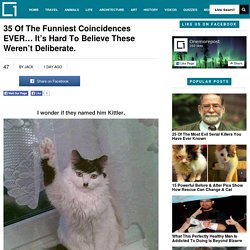 Somewhere out there, someone Instagramed this photo with commentary on class in America. Just a couple of Fuechheads. Double trouble. You know you’ve reached stardom when you start seeing yourself plastered all over the city. This is the best thing ever. These cats are looking into an alternative universe. It should be their next album cover. Did he inspire the socks, or did the socks inspire him? The standard issue Walmart shopper uniform. Love is love. He hopes it will be his breakout role. 30 Crazy Photographers Who Will Do ANYTHING For The Perfect ShotOnemorepost. Life on Earth sur Twitter : "True love is stronger than time.. Fascinating Pictures on Twitter: "Photographs of dancers taken with long exposure. Life on Earth sur Twitter : "Sunrise at Niagara Falls... Fascinating Pictures sur Twitter : "National Geographic photographers. Life on Earth sur Twitter : "Jetman versus Jet team.

BY MANY LIGHT IS THE HOUSE ONE WITH NATURE. - This man started with $9,000 and a pile of dirt. 6 weeks later, he'd built his dream house. 1. An old mechanical calculator - I Cant Stop Looking At These Photos Of Random Things Cut PERFECTLY In Half. Facts sur Twitter : "Interesting Pictures from the Past - Incredible Color Footage Of Berlin At The End Of World War IIOnemorepost. These 34 Photos Are So Perfectly Timed, They Seem Impossible.

Photography can be extremely rewarding, but it's also challenging. 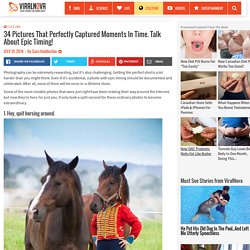 Getting the perfect shot is a lot harder than you might think. Even if it's accidental, a photo with epic timing should be documented and celebrated. After all, most of them will be once-in-a-lifetime shots. Some of the most notable photos that were just right have been making their way around the Internet, but now they're here for just you. It only took a split-second for these ordinary photos to become extraordinary. 1. 2. 3. 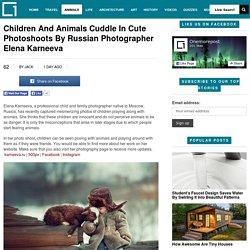 She thinks that these children are innocent and do not perceive animals to be as danger. It is only the misconceptions that arise in later stages due to which people start fearing animals. In her photo shoot, children can be seen posing with animals and playing around with them as if they were friends. 20 Award-Winning Wedding PhotographsOnemorepost. The ISPWP- International Society of Professional Wedding Photographer organizes a quarterly contest between its members. 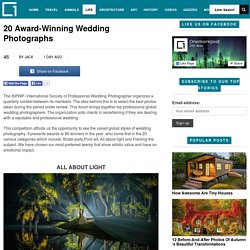 The idea behind this is to select the best photos taken during the period under review. This forum brings together top professional global wedding photographers. The organization aids clients in ascertaining if they are dealing with a reputable and professional wedding This competition affords us the opportunity to see the varied global styles of wedding photography. It presents awards to 80 winners in the year who come first in the 20 various categories which include: Bridal party,Pure art, All about light and Framing the subject .We have chosen our most preferred twenty that show artistic value and have an emotional impact.