46 Incredible Photos You May Not Have Seen Before. #22 Is Unbelievable. 1. 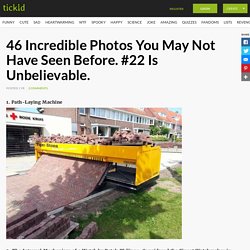 Path-Laying Machine 2. The Internal Mechanism of a Watch by Patek Philippe, Considered the Finest Watchmaker in the World 3. Sunset and Eclipse Happening at the Same Time 4. 5. 6. Twitter. 6 Unusually-Shaped Fruits And Vegetables That Look Like Something Else. Pictures of the year: April, May and June 2015. The Telegraph's photographers choose their favourite pictures of 2015. Sunday, Dec. 27, 2015 - Photographs Remember. Dennis Glennon Photography Wildlife, Nature & Dog Image Photo Gallery. Pictures of the day: 24 December 2015. This Photo Captures Hot Tea Flash-Freezing At –31 Degrees. □□□ Harvard University (Cambridge, MA) □ It’s More Than Just a Photo (11 pics) – Latest Trickz.

The world's largest and most powerful destroyers and aircraft carriers. The USS Zumwalt, the largest destroyer ever built for the US Navy. 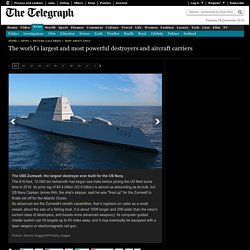 The 610-foot, 15,000-ton behemoth has begun sea trials before joining the US fleet some time in 2016. Its price tag of $4.4 billion (£2.9 billion) is almost as astounding as its bulk, but US Navy Captain James Kirk, the ship's skipper, said he was "fired up" for the Zumwalt to finally set off for the Atlantic Ocean. So advanced are the Zumwalt's stealth capabilities, that it registers on radar as a small vessel, about the size of a fishing boat. It is about 100ft longer and 20ft wider than the navy's current class of destroyers, and boasts more advanced weaponry. #Mindblowing. Let's go skydiving □ PRINT GALLERY — INSTANT. A beautiful Native American couple. #history. I'm not a part of your system! Inuit throat singing can be a game when the first to laugh loses. But it sounds enchanting. ThatsEarth: Dew drops on a Dragonfly ... Moon Games - Laurent Laveder.

Incredible architecture in Abu Dhabi. #uae. An amazing shot by Kobi Refaeli. These Guys Are Surfing Rivers And It's Epic. Winter at Alsace, France. Awesome picture from Nasa. #space. Felix Baumgartner's 24 mile fall from Space, what an amazing shot. © Red Bull Stratos/Jay Nemeth / AP. Igloo Hot Tub, Switzerland. Amazing photo of the teenage Melanie Griffith with her pet lion in the 1970s. #lanimals. The Princess Royal will visit Belgium on Monday to mark the centenary of the execution of #WW1 Nurse Edith Cavell. Telluride, Colorado. Incredibly touching work of art, made from the faces of the 670 soldiers who died in the Iraq War #neverforget. A Chinese artist created a ladder to heaven of 1,600 feet in height using fireworks in tribute to his grandmother. These Photos Of Famous Monuments Zoomed Out Will Change Your Perspective. (Literally.) These photographic pairs of famous landmarks remind us historical sites are framed and cropped to highlight impressive features while downplaying any distracting nearby landscapes. 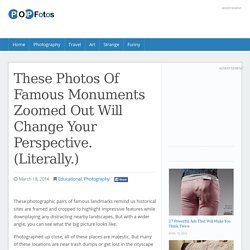 But with a wider angle, you can see what the big picture looks like. Photographed up close, all of these places are majestic. But many of these locations are near trash dumps or get lost in the cityscape when viewed from far away. 44 Perfectly Timed Photos You Need To See. Wow. ThatsEarth: Popping a Soap Bubble ... Impressive Art by Banksy. Palestinian girl looking for her books under the ruins of her home. 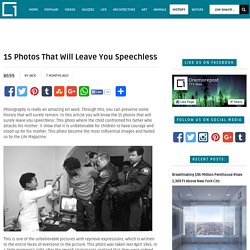 Through this, you can preserve some history that will surely remain. In this article you will know the 15 photos that will surely leave you speechless: This photo where the child confronted his father who attacks his mother. It show that it is unbelievable for children to have courage and stood up for his mother. This photo become the most influential images and hailed so by the Life Magazine. This is one of the unbelievable pictures with reprieve expressions, which is written to the entire faces of everyone in the picture. This is the photo of a man who uses the suicide hotline on the Golden Gate Bridge. Imagine standing there! Valley Of Flowers, Himalayas. 22 International Borders Around The World. Residents Of Naco, Arizona And Naco, Mexico Play Volleyball Match Over Fence Between USA And Mexico source Slovakia, Austria And Hungary Norway And Sweden. 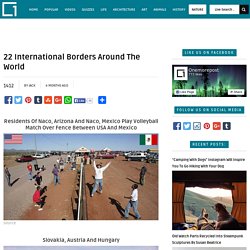 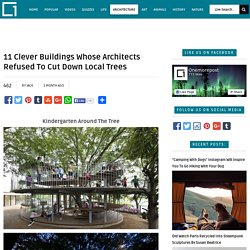 Canadian Photographer Captures Wanderlust In Magnificent Landscapes. 10 Insane Things Built In Dubai. 20 Mind Boggling Pictures You've Never Seen Before. Our world is an amalgam of so many fascinating elements, that the opportunity for an excellent and rare photograph seems to always be around the corner. 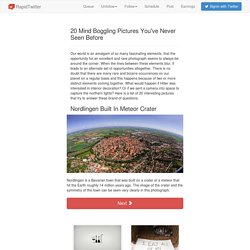 When the lines between these elements blur, it leads to an alternate set of opportunities altogether. There is no doubt that there are many rare and bizarre occurrences on our planet on a regular basis and this happens because of two or more distinct elements coming together. What would happen if Hitler was interested in interior decoration? Or if we sent a camera into space to capture the northern lights? Here is a list of 20 interesting pictures that try to answer these brand of questions.

50 Hilarious Perfectly Timed Photos. 25 Pics That Are Downright MesmerizingOnemorepost. A Slice of Aloe Vera Strengite Looks Like a Healing Scab on a Dragon A Fire in Tuscon, AZ The Tallest Statue in the World, Ushiku Daibutsu, is in Japan and Stands 390 Feet Tall This Opal Looks Like Some Other World’s Sunset in the Clouds. 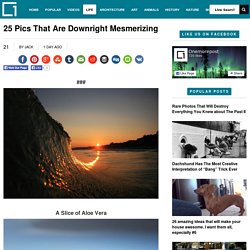 Richard Branson on Twitter: "A unique perspective on #NeckerIsland - photographed from the ISS in space! Earth Pics sur Twitter : "Belgium... Autistic Girl Expresses Unimaginable Intelligence. 23 Photos That Will Restore Your Faith In Mankind. Sometimes you need a reminder that people can do wonderful things. 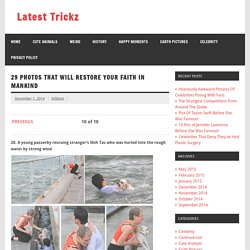 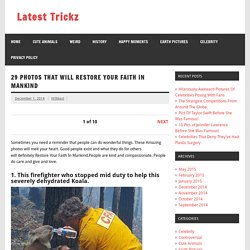