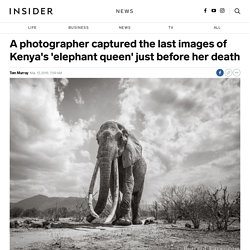 The photos were taken by British photographer Will Burrard-Lucas, who last month photographed a rare African black leopard for the first time in more than 100 years. The elephant, named F_MU1 and whom Burrard-Lucas called the Elephant Queen, died of natural causes shortly after Burrard-Lucas photographed her. It's estimated that there are fewer than 20 tusker elephants, which are often hunted by poachers because of their long tusks, left.

In February, a rare African black leopard was photographed for the first time in more than 100 years. Read more: A wild African black leopard has been photographed for the first time in more than 100 years The photographer who captured the images, Will Burrard-Lucas, seems to have a knack for spotting creatures of this ilk. Will Burrard-Lucas The Elephant Queen, as Burrard-Lucas called her, died soon after he took the photos. Playtime at the Elephant Safari Park. A “Big” Move: Two Male African Elephants from San Diego Zoo Safari Park Transferred to Caldwell Zoo in Texas. Two male African elephants born at the San Diego Zoo Safari Park—Emanti and eMacembe LaLu Hlata, better known as “Mac”—are now residing at the Caldwell Zoo in Tyler, Texas. 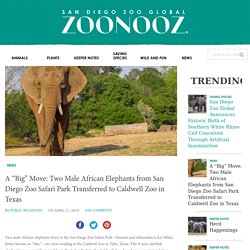 The 9-year-old bull elephants were recently moved from the Safari Park to the Caldwell Zoo, based on a recommendation from the Association of Zoos and Aquariums (AZA) Species Survival Plan (SSP), which is designed to maintain healthy, self-sustaining and genetically diverse populations of selected species, most of which are threatened or endangered. All AZA- accredited facilities work together to manage populations, participate in breeding programs, and promote conservation and education goals. African elephants are listed as Vulnerable on the International Union for Conservation of Nature (IUCN) Red List of Threatened Species. 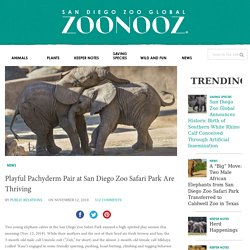 While their mothers and the rest of their herd ate fresh browse and hay, the 3-month-old male calf Umzula-zuli (“Zuli,” for short) and the almost 2-month-old female calf Mkhaya (called “Kaia”) engaged in some friendly sparring, pushing, head-butting, climbing and tugging behavior. “These young calves are so much fun to watch,” said Curtis Lehman, animal care supervisor, San Diego Zoo Safari Park. “They are almost the same size, so they naturally gravitate to each other. The calves’ moms know they are in a safe environment, so they’re allowing them to roam the exhibit—knowing that if the calves stray too far or get too rough with each other, an “auntie” will intercede and make sure they are OK.”

The calves have plenty of “aunties,” who help the moms out by alloparenting—a system of group parenting in which individuals other than the parents act in a parental role. Playful Pachyderm Pair at San Diego Zoo Safari Park Are Thriving. Elephant Calf Named Mkhaya. The San Diego Zoo Safari Park is proud to announce that the newest baby elephant born at the Park has been named Mkhaya. 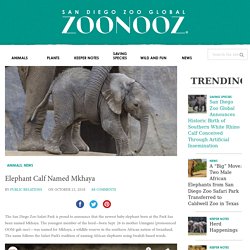 The youngest member of the herd—born Sept. 26 to mother Umngani (pronounced OOM-gah-nee)—was named for Mkhaya, a wildlife reserve in the southern African nation of Swaziland. The name follows the Safari Park’s tradition of naming African elephants using Swahili-based words. The youngster’s name was selected after consultation with wildlife experts in Kenya. “I find the name Mkhaya well fitting, as it agrees with our naming considerations linked to place of rescue,” said Paul Leringato, chief executive officer of the Reteti Elephant Sanctuary. “Because its mother is from Swaziland, the naming tells a good story.” San Diego Zoo Global collaborates with the Reteti Elephant Sanctuary in Africa, which operates a community-based elephant orphanage that cares for injured and orphaned elephants in the Namunyuk region of Kenya. 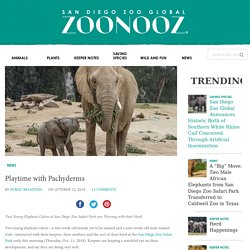 Keepers are keeping a watchful eye on their development, and say they are doing very well. Mom and Baby Elephant at Tampa's Lowry Park Zoo. Zuli From Above. Enter Umzula Zuli! (Three Weeks Old) Playtime with Pachyderms. A Big Delivery: Elephant Calf Born at San Diego Zoo Safari Park. New Elephant Birth Is Second at Safari Park in Less Than Two Months Elephant keepers at the San Diego Zoo Safari Park received a big surprise when they came in to work this morning (Sept. 27, 2018.) 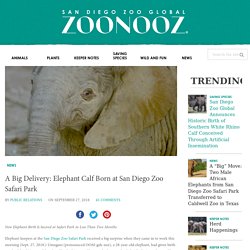 Umngani (pronounced OOM-gah-nee), a 28-year-old elephant, had given birth to a healthy, 281-pound female calf—the biggest calf ever to be born at the Safari Park. A newborn calf generally weighs 200 to 268 pounds at birth. While keepers were anticipating the birth—the average gestation period for African elephants is 649 days, or 22 months—it came a little earlier than they had expected. “Knowing Umngani’s birth window was between Sept. 12 and Oct. 18, we had been placing her in a small area of the yard at night, separate from the rest of the herd,” said Curtis Lehman, animal care supervisor at the Safari Park.

Recorded by security cameras, Umngani gave birth without complications at 11:20 p.m. The Safari Park is now home to 14 elephants—four adults and 10 youngsters. Baby Elephants are “Awwww”fully Cute! In the final hours of World Elephant Day at the Safari Park, just before midnight on August 12, 2018, female elephant Ndulamitsi gave birth to Umzula-zuli, a male calf, called “Zuli.” 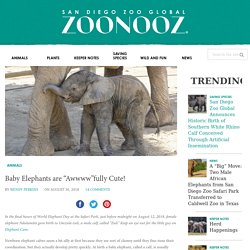 Keep an eye out for the little guy on Elephant Cam. Newborn elephant calves seem a bit silly at first because they are sort of clumsy until they fine-tune their coordination, but they actually develop pretty quickly. At birth a baby elephant, called a calf, is usually quite hairy. It usually measures three feet (one meter) tall and weighs 198 to 265 pounds (90 to 120 kilograms). In general, a young calf is standing on its own about one half hour after birth and can walk on its own about one hour later. Baby elephants spend their days practicing making all four legs go in the same direction at the same time, perfecting their ear flaring, and mastering the all-important trunk control. The day after he was born, Zuli followed his mother into the main habitat to meet the rest of his herd. All Things Zuli. Zuli has definitely been living up to his name! 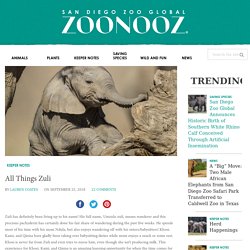 His full name, Umzula-zuli, means wanderer and this precious pachyderm has certainly done his fair share of wandering during the past five weeks. He spends most of his time with his mom Ndula, but also enjoys wandering off with his sisters/babysitters! Khosi, Kami, and Qinisa have gladly been taking over babysitting duties while mom enjoys a snack or some rest. Khosi is never far from Zuli and even tries to nurse him, even though she isn’t producing milk. This experience for Khosi, Kami, and Qinisa is an amazing learning opportunity for when the time comes for them to have their own calves. Zuli has been nursing and growing like a champ!

Along with his wrestling skills, Zuli is also mastering the art of using his trunk! Zuli has been having the best time interacting with his herd. Playtime at the Elephant Safari Park. ZooBorns on Instagram: “#repost @sdzsafaripark □Turn up the sound. Mkhaya is about to make your Monday. #MondayMotivation #elefun #PachydermPair □Keeper Evan”

San Diego Zoo Safari Park on Instagram: “Some □ love to get you through Monday! (At the end she makes a mini-trumpet sound) Our little girl is so playful now- she's developing…” Asian elephants could be the math kings of the jungle - World News - The Elephant Sanctuary in Tennessee. October 22, 2018 Asian elephants demonstrate numeric ability which is closer to that observed in humans rather than in other animals. 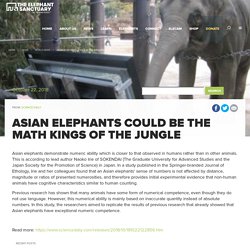 This is according to lead author Naoko Irie of SOKENDAI (The Graduate University for Advanced Studies and the Japan Society for the Promotion of Science) in Japan. In a study published in the Springer-branded Journal of Ethology, Irie and her colleagues found that an Asian elephants' sense of numbers is not affected by distance, magnitude or ratios of presented numerosities, and therefore provides initial experimental evidence that non-human animals have cognitive characteristics similar to human counting. Previous research has shown that many animals have some form of numerical competence, even though they do not use language. However, this numerical ability is mainly based on inaccurate quantity instead of absolute numbers. ZOO Prague - 3 days old baby elephant and his 6 months old cousin.