Untitled. A large thunderstorm that swept through Edmonton Thursday evening caused some flood damage to the Rogers Place arena, which is set to host NHL playoff games next month. 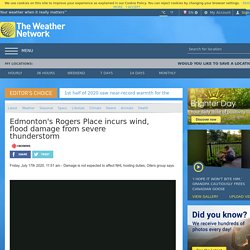 Though the heavy rain and wind did cause damage at one of the arena's entrances, the flooding isn't expected to affect plans to host the NHL. I wonder if @doniveson is aware of the MASSIVE bike chop-shop operation in the middle of Queen Elizabeth Park? This is not a camp - this is an organized business by a group that are terrorizing the south-central communities and destroying/stealing propert. Untitled. “One of the things I worry about with just pulling the name off, then we even want to forget that there was exploitation, fraud, robbery and theft by the early white establishment against the First Nations people in the area,” he said. 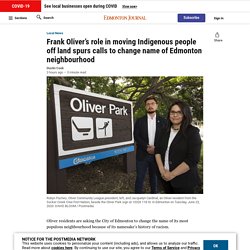 “There’s a discussion that the community of Oliver and the broader community needs to have to honour reconciliation and through that come up with an answer that best fits the philosophy of Edmonton in 2020.” Moving forward, the community league is seeking city support and resources to begin a renaming discussion with the public. (1) Men's Sheds Edmonton. 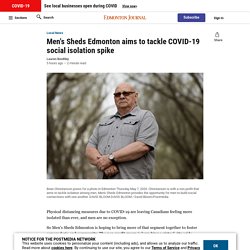 Christianson said the meetings give the guys an opportunity to speak to someone when they’re cooped up in their homes. “I live in a very small one-bedroom apartment, and the walls get a little cramped every now and again. And the nice thing about this is you’re talking to other guys that are going through the same problem, talking about guys that are maybe having trouble dealing with the isolation, and you can talk to somebody else that has the same problem, and it helps,” he said. On May 15, his group is hosting a speaker from the Schizophrenia Society of Alberta to give a presentation on the illness.

Suicide is the second-most common cause of death for young people, but men in their 40s and 50s have the highest rates of dying by suicide, according to the Canadian Mental Health Association. lboothby@postmedia.com @laurby. Message in a bottle: Neighbours in isolation stay connected via carrier-cat. Like a lonely castaway on an island far at sea, Sam Cramer is waiting for her next message in a bottle to arrive. 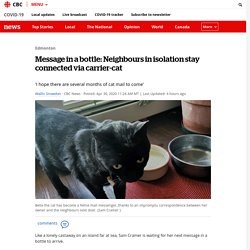 But Cramer's messages don't arrive on the crashing waves. Instead, they're delivered by her pet cat Bella. Edmonton tops world in return to walking during pandemic, Apple mobility data shows. Alberta’s capital leads major world cities when it comes to getting out for a walk once again. 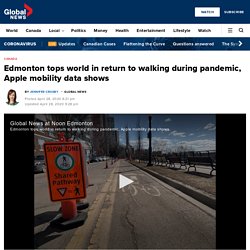 HALIFAX — As Canadian communities brace for rising risks of spring flooding related to climate change, a non-profit group has published findings suggesting preserving wetlands and forests can be key to reducing adaptation costs. 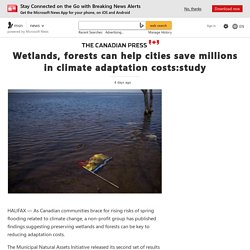 The Municipal Natural Assets Initiative released its second set of results recently on how forests, creeks, wetlands, ponds and other natural features help cities avoid costly infrastructure projects. Charlottetown mapping out the city's local food resources. The City of Charlottetown is soliciting input to create a map of food available in the capital area to help people get access to healthful food. 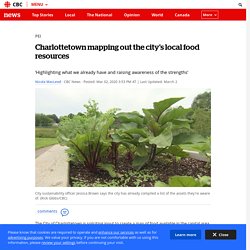 The local food asset map is an initiative of the Charlottetown Food Council working group, created in 2018 to identify and improve barriers to good, healthful food. The map aims to highlight the places where locally-produced foods can be accessed, grown, prepared, shared or bought. "One of the outcomes from this will be to see kind of where there are some gaps in Charlottetown," said Jessica Brown, sustainability officer for the city of Charlottetown. "More than that, it's actually about kind of applying more of a positive lens and showing people what assets they might have in their community that are already there that they don't know about. " The city has launched an online community food survey asking people what their needs and wants are, and also plans to host three public consultations in March and April. The City Of Montreal Is Now Testing Compost Collection For Certain Buildings In 4 Boroughs.

The City of Montreal just announced its new project for the collection of organic waste matter around the city, which is in line with Montreal's zero waste by 2030 objective.It is specifically focusing on collection for buildings in four specific boroughs with nine dwellings or more.Get more information about the City's new composting project below! 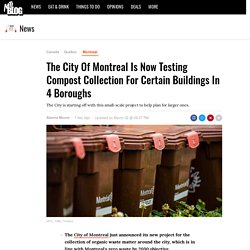 New cycling study classifies, rates Metro Vancouver's bikeways. Metro Vancouver has more bikeways than ever before, with the length of those routes nearly tripling over the past decade, and a growing number of people are commuting by bike. 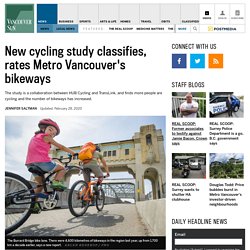 However, more than half of bike routes aren’t comfortable for most cyclists because of higher posted speeds, proximity to vehicles and high traffic volumes. On Friday, HUB Cycling and TransLink released the first-ever report on the state of cycling in the region, which looked at cycle routes in 21 municipalities, one electoral area and one First Nation with the goal of developing a way of classifying bikeways by type and comfort level.

The report also measures progress toward regional goals of more and safer cycling, supports more effective and efficient print maps and online route-planning tools, guides municipal and regional planning to fill gaps in the cycling network and builds on research that examines health outcomes in Metro. Brian Minter: Citizen-led Butterflyway Project aims for a pollinator revival. With the climatic changes taking place, many of our indigenous animals, birds and pollinators have been struggling for survival, and their numbers are falling. 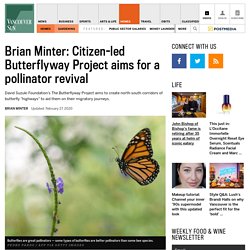 We’re all aware of the many challenges faced by the beautiful monarch butterflies and their decline. The loss of habitat has also taken a toll, but I’m always inspired when Canadians collectively work together to help reverse situations of habitat loss in order to bring back many of our native animals and pollinators. Butterflies are just such a case. Hanes: Reducing waste, one cup of coffee at a time. As the owner of Café Perko in Montreal’s Villeray district, Émilie Lebel is more conscious than most people about the environmental toll of disposable coffee cups. Back in 2018, she was among a handful of independent business-owners who teamed up to try to tackle a global problem at a very local level: the enormous amount of waste generated by the grab-and-go coffee industry.

The cafés joined forces to pioneer a consignment program called La Tasse. Customers who come in to grab a coffee without a mug of their own can get a bright blue reusable cup with a deposit of $5. They can later return the cup and get their money back at any participating location. Whitehorse shop cuts waste for greener tattoos. Their tattoos may be multi-coloured, but the owners of Whitehorse's Molotov and Bricks are trying to make business a little greener. "Tattoo artists produce a lot of garbage," said Kirsty Wells, a tattoo artist at Molotov and Bricks. Alberta elements just right to create natural ‘snowballs’ Posted March 3, 2020 3:22 pm Updated March 3, 2020 3:26 pm The soft snow and strong winds Alberta experienced on Monday created a perfect storm of sorts for Mother Nature to join in on the winter fun.

Several photos and videos of snowballs rolled by the wind came into the Global News inbox through the day. Advocates chain themselves to Canada Place for animal rights. Animal rights activists in Edmonton chained themselves to Canada Place Wednesday demanding an animal bill of rights. “The laws tend to be quite toothless. Both the criminal law and the provincial Animal Protection Act are really inadequate,” said Tove Reece, a member of the group Direct Action Everywhere, or DxE.

Brix. Can you believe this is in the middle of a city of +1 million? Another reason I love #yeg. Access to nature □. #Edmonton #naturewalk… Block 1912 Edmonton: A European Cafe. Block 1912 Edmonton is a European cafe style restaurant on Whyte Ave. Location: Johnsons Cafe Edmonton: Dine in Fort Edmonton's Selkirk Hotel. Johnsons Cafe Edmonton - enjoy a flavor of Edmonton's history at Fort Edmonton Park.

Edmonton attack suspect facing terrorism charges was investigated by RCMP in 2015 - The Globe and Mail. Abdulahi Hasan Sharif Identified As Edmonton Terrorism Suspect By Police Sources. Two years before an attack in Edmonton that would leave one police officer and several others injured, Abdulahi Hasan Sharif was being investigated by the RCMP. Justin Trudeau Says Canada Cannot Let Extremism Take Root After Edmonton Attack. Prime Minister Justin Trudeau, along with other politicians, condemned the violent terrorist attacks in Edmonton following a chaotic night where a police officer was stabbed and several pedestrians deliberately struck with a U-Haul van.